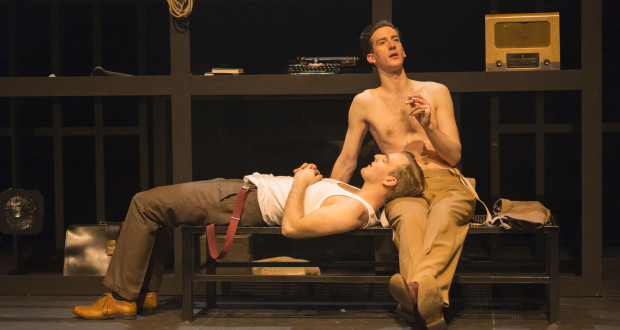 Cons: A few musical numbers where the dialogue was a little lost.
Thrill Me: The Leopold & Loeb Story, Greenwich Theatre – Review

Pros: Fast paced story with suitably dark music, executed with finesse by a talented duo. Cons: A few musical numbers where the dialogue was a little lost. The story of Leopold and Loeb, it seems, is well known. Branded ‘the crime of the century’ by many a newspaper at the time of their capture, I remained sadly ignorant to the whole affair as I settled down in the Greenwich Theatre to watch Thrill Me. No doubt, with prior knowledge of the infamous duo, you might have a different opinion of the performance. However, armed only with a vague idea&hellip;

A gripping tale of obsession and devotion gone too far, with an atmosphere and storyline which certainly did ‘thrill me.’

The story of Leopold and Loeb, it seems, is well known. Branded ‘the crime of the century’ by many a newspaper at the time of their capture, I remained sadly ignorant to the whole affair as I settled down in the Greenwich Theatre to watch Thrill Me. No doubt, with prior knowledge of the infamous duo, you might have a different opinion of the performance. However, armed only with a vague idea of the story after perusing the programme, I saw the tale through fresh eyes, and wholeheartedly enjoyed the captivating experience.

A musical adaptation of one of the 20th century’s most callous crimes, Thrill Me spins a dark, twisted tale of the desperations of love and the perils of a life of crime. Set in Joliet Prison in 1958, the majority of the play is constructed of flashbacks to Chicago, 1924. Not satisfied with mediocrity, Richard Loeb develops a fascination with Nietzsche, and considers himself a self styled ‘superman’, whose intellect is on a higher plane and above the laws of society. His devoted friend, Nathan Leopold, craves the love of his peer, and indulges in a life of felonies to please Loeb. When petty crimes like arson and theft cease to thrill them as they once did, the two plan the most heinous sin: the murder of a 12-year-old boy. Considering it the ‘perfect crime’, the intelligent duo’s delusions of superiority are soon dashed, when the law inevitably catches up to them.

Admittedly, I did have doubts about the credibility of adapting a murder into a musical, it worked for Chicago, I guess, but I was surprised to find that the musical numbers in this piece worked extremely well. The addition of music provided a welcome change of pace to the otherwise rather disturbing story. Although the songs perfectly suited the unsettling mood of the play, there were a couple of instances where dialogue got a bit lost in the melody. Particularly in the case of ‘My Glasses/Just Lay Low’, the pair sang in unison, and, albeit creating the panicky mood that the scene required, it was a little tricky to make out the words. These issues were few and far between however, and didn’t really detract at all from my enjoyment of the piece.

In terms of the cast, there’s always a concern that a two man performance might become a little stagnant. However, Jo Parsons and Ben Woods as Leopold and Loeb respectively, had a wonderful stage presence. When combined with the fast paced storyline and atmospheric staging, they did a superb job of bringing the haunting tale to life. Woods’ smug, almost bored portrayal of psychopathic Loeb was brilliantly executed, but it was Parsons’ acting chops that really stole the show for me. His desperate attempts to capture Loeb’s attention, and his effortless shifts between a young man and a convicted felon, were the pinnacle of the performance. I would recommend seeing it for him alone.

Another fantastic asset was the striking atmospheric lighting design from Richard Williamson. When paired with a minimalistic set and simple, seamless scene changes, the lighting succeeded in transforming the ambience in an instant. Look out for a particularly chilling scene involving car headlights and a misty stage that I found particularly impressive in setting a sinister tone.

Overall, expect a professional, sleek performance, worthy of all its praise. Of course this is considered the first revival of the piece, so they’ve had plenty of time to devise the perfect performance. Alas, the same cannot be said for the real Leopold and Loeb!