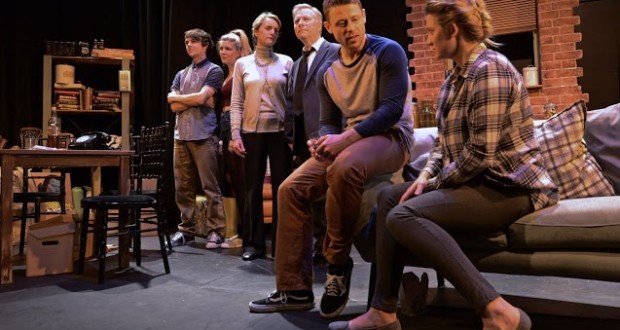 Pros: Bright songs combined with an articulate script feel like a breath of fresh air in the musical genre.

Pros: Bright songs combined with an articulate script feel like a breath of fresh air in the musical genre. Cons: Although a minor quibble, the tight seating area often resulted in bottles and glasses being kicked over. The very notion of a new musical in the West End might have once been the preserve of Andrew Lloyd Webber, but the St James Studio is now leading the advance of small producers in the shadow of London’s theatre district. Originally written and premiered at the London Theatre Workshop, Apartment 40C has four new songs and a revised book in this&hellip;

An engaging new kid on the block that has the potential to contend with the heavyweight musicals of the West End.

User Rating: 4.75 ( 1 votes)
The very notion of a new musical in the West End might have once been the preserve of Andrew Lloyd Webber, but the St James Studio is now leading the advance of small producers in the shadow of London’s theatre district. Originally written and premiered at the London Theatre Workshop, Apartment 40C has four new songs and a revised book in this impressive new version. It cleverly explores the relationship of leading characters Edward and Kathryn in three distinct stages: first as twentysomethings, who meet after signing a lease on apartment 40C; as thirtysomethings, married and desperately trying for a baby; and fortysomethings, dissecting their marriage and lamenting how their son grew away from them. All the biggest events in their life happen under the roof of apartment 40C, and we get to eavesdrop on their hopes, fears and aspirations as the story slowly unfolds.

What gives this production a smart twist is the use of three pairs of actors, who play the couple at each stage: Katie and Eddie in their twenties, Kate and Ed in their thirties, and Kathryn and Edward in their forties. Cast members work briskly, with pairs often remaining on stage while their younger or older selves relate key conversations in their relationship. The songs are tuneful and mellow and I sense potential standalone hits in Wait, Kiss Me Again and Fairy Tales (how about a cast album guys?). The dialogue is bright and incisive as it chronicles the ups and downs in the relationship. The most memorable dialogue comes from the couple in their fortysomething mode. We get a powerful range of emotions; there’s anger, resentment, frustration and bitterness, but also genuine sadness at the love that went to waste. The twentysomethings logically bear little resemblance to the fortysomethings. Aspiring journalist Katie and Eddie, a newly qualified lawyer, bicker over who should remain in apartment 40C and inevitably fall in love over coffee. The thirtysomethings are focussed exclusively on a longed for child and contemplate moving to a state where adoption rules are more relaxed. The cast are on fine form throughout. Alex Crossley (Katie), Lizzie Wofford (Kate) and Nova Skipp (Kathryn) sing beautifully. Alex James Ellison (Eddie) and Johnjo Flynn (Ed) lend solid support, while Peter Gerald (Edward) takes the acting honours.

Relatively few new musicals are tried on the West End stage, and usually with good reason. Why take the risk of selling a new concept to the audience when you plenty of reliable crowd-pleasers lying around? But here’s a new musical that might buck the trend; whilst it needs some further polish, Apartment 40C is almost at the stage where it could transfer to the West End. It has great songs and a thoughtfully written storyline that draws the audience in with the greatest of ease. A refreshing production in the classiest of venues.