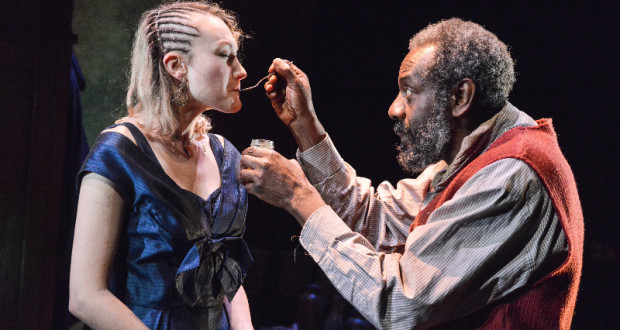 The Honey Man, The Albany – Review

Pros: A clever set, good performances and an interesting storyline

Cons: Lacked a bit of edge and the story needed a more gradual build.

“Imagine if superheroes were named not after animals, but condiments?” is what I asked myself while walking from the station to the theatre tonight. The Honey Man would be pretty cool – I’d invite him in and get him to roll around on my doormat, picking up all the letters I can’t be bothered to open. “Why didn’t you pay your Council Tax bill, Mr Wake-Walker?” “Oh I can’t cos it’s stuck to The Honey Man’s arse. Sorry, George Osbourne.”

Luckily, George Osbourne wasn’t at the Albany Theatre’s production of The Honey Man tonight, and nor was there any hint of a superhero. Written by and starring Tyrone Huggins, it tells the story of Misty, a teenage girl (Esther Smith) from a crumbling aristocratic family and her chance encounter with an old Caribbean man who keeps bees (and makes, though is not always covered in, honey). He’s kind and genteel; she’s a spoilt and rebellious brat. These guys are never going to get on, surely? Stop the play so we can all watch Comic Relief Darts!

Well clearly they do, and it grew into a genuinely touching story. Heartwarming through it was, it was also an unbalances story. There was an awful lot of the pair in their enemy stage, but once they became friends, it all got a bit rushed. It was almost as if a whole middle act, one that might have shown more of the transformational and ‘coming-of-age’ nature of this tale, had been remove.

One might argue that, with a running time of over an hour plus an interval, another chunk of story would have made the whole piece far too long. However there were some bits that I felt were pretty superfluous, and didn’t need as much attention as they were given. In particular, Misty’s one way phone conversations with her friends and parents were a bit awkward and alienating – it’s hard in both the writing and performing to keep an audience engaged when the actor is pretending to talk down the phone to someone (I should know, I do it all the time at work to avoid making tea for people). As these exchanges were effectively just devices setting up new turns in the narrative, something more concise, visual and punchy would, I feel, have worked better.

But all in all the play was an enjoyable spectacle. The set was thoroughly well designed – a clever mix between The Honey Man’s run down shack and Misty’s grand family home. A large wonky wooden structure in the middle doubled up as a front door, a cabinet, a bed, and a screen for scene-setting projections – a multipurpose contraption that was almost, but not quite, as magical as those alarm clocks that cook bacon. The acting was on the whole good (except for those eggy phone calls), and crucially it was entertaining enough for the two hours in the theatre to whizz by.

At the end, a clear theme emerged: how the frantic nature of modern life can do with a dollop – quite literally – of the slower-paced, contemplative past. It’s a sweet sentiment, but in my opinion it wasn’t quite edgy enough to propel it from good to fantastic. The Honey Man was – perhaps appropriately – a bit too sugar-coated.