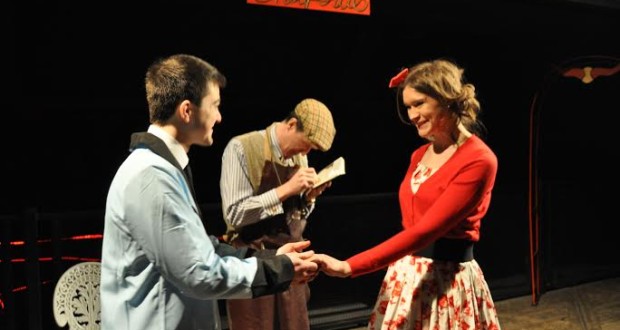 A Chaste Maid In Cheapside, The Rose Playhouse – Review

Cons: Given the positioning of the theatre on an archaeological site, it doesn’t offer all the modern conveniences and levels of warmth we are accustomed to in other venues – but that was part of the experience.
A Chaste Maid In Cheapside, The Rose Playhouse – Review

Pros: A great cast and gorgeous costume design light up one of London’s more authentic theatre spots. Cons: Given the positioning of the theatre on an archaeological site, it doesn’t offer all the modern conveniences and levels of warmth we are accustomed to in other venues – but that was part of the experience. Crossing Southwark Bridge after my visit to The Rose Playhouse, I was struck not only by the freezing cold night air, but by the fantastic location of this theatrical setting, hugging the Thames as it does just south of the City of London proper. A&hellip;

A light and cheery revival of Middleton’s classic comedy, directed in completely the right spirit with some added fifties flair.

Crossing Southwark Bridge after my visit to The Rose Playhouse, I was struck not only by the freezing cold night air, but by the fantastic location of this theatrical setting, hugging the Thames as it does just south of the City of London proper. A stone’s throw from Bankside, The Globe and the Tate Modern, The Rose Playhouse is situated in what now, and in Middleton’s time, a hub of entertainment. The venue seats a small audience comfortably on three sides, with access to a bar but no toilets. There wasn’t an empty seat in the house, and hopefully that will continue throughout the run.

A Chaste Maid In Cheapside follows young lovers Moll and Touchwood Junior, whose efforts to marry are continually thwarted by Moll’s social climbing parents and the focus of their ambition, Sir Walter Whorehound – an aptly named local gentleman with a big title and little substance. Intermingled with the main narrative thread are barren couple Sir Oliver and Lady Kix, whose desperation to bear children leads them to engage the ‘services’ of Touchwood Senior, Junior’s older brother. Middleton’s text is a classic simply drowning in double entendre and dramatic irony. If you like the Carry On style of mischief and bawdiness then you’ll appreciate this play.

Subjected as we are to the semi-pornographic stylings of contemporary television, magazines, radio and toothpaste adverts, we run the risk of becoming desensitised to the sexual nuances and silliness of long dead dramatists. It takes more than a wink and a nudge to strike a chord, and it’s a testament to the strength of this cast that they gave us that bit more. The result was a really entertaining evening of colourful characters who spoke Middleton’s language with sincerity and ease.

Yellowhammer (Stephen Good) and Maudlin (Josephine Liptrott) captured the overbearing parental figures with a fresh approach that was faithful to the stock roles without feeling merely functional. Moll (Beth Eyre) was a suitably dumb and pretty heroine, who had infused her character with a nice bit of fifties flirt. More filthy than flirty, Sir Walter Whorehound (Andrew Seddon) was a delightful rogue whose melodramatic outburst towards the end deserves some sort of supporting debaucher award. Sir Oliver Kix (Fergus Leathem) and Lady Kix (Alana Ross) argued like they’d been married for years, and were very watchable as they swung from love to hate. Allwit (Timothy Harker) was the smuggest cuckold you’ll ever see, and his self-interest was felt in every word and gesture. The Touchwood brothers (Harry Russell, Richard Reed) came across as very young and vital; I didn’t know it was possible to act fertile but maybe they use some sort of method acting.

All the characters had a newness to them that was no doubt assisted by the lovely costumes designed in fifties style, with bright colours, big skirts and Elvis’ shirts. The music was from the same period and added a welcome energy to the somewhat dark stage space at The Rose Playhouse. They put the space to great use in an action sequence wherein the players moved onto the excavated site at the back; I really believed Moll was escaping in the dead of night under London’s bridges, and clambering through sewers to meet her lover – quite funny and of course utterly silly.

This is an excellent production from Mercurius Theatre that has a strong London identity. I really enjoyed it, and recommend you get your ticket before they all sell out!