Home » Features and Interviews » People’s theatre: sharing in the community 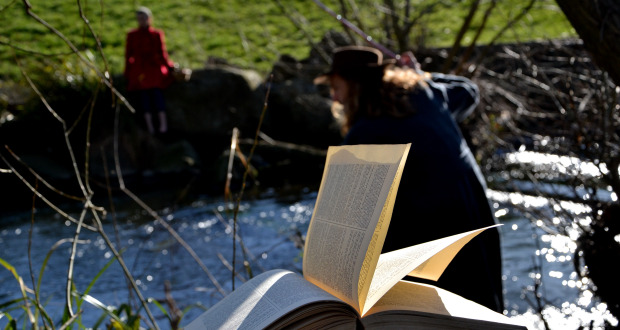 Theatro Vivo's production of The Hunters Grimm opens this week.

People’s theatre: sharing in the community

As they prepare to open their latest production, Tim Read speaks to Teatro Vivo about collaboration, ownership and sharing space with their local community.

It would take an inordinate amount of charity to describe Woolwich Town Centre as being on the verge of gentrification. There is a depressing uniformity to the markings of deprivation in London; it is there in the urban decay seeping out of the failure of numerous regeneration schemes, and again in the inevitable presence of Greggs, Ladbrokes and Superdrug lining the high street.

Yet two minutes’ walk away, through what is left of the Royal Arsenal Gatehouse, it is a very different story. Here vast bill boards advertise the impending arrival of Crossrail and, in the buildings that once housed 80,000 employees, the inevitability of Berkeley Executive Homes. Starting price for a property? A mere £330,000. Woolwich Market? A ‘buzzing retail hub’ apparently.

It is typical London; a new community being dropped onto one that has quietly got along with things for hundreds of years. I may not know the area, but luckily today I have the perfect guides, as I am here to meet Kas Darley and Mark Stevenson, Artistic Associates for Teatro Vivo, to talk about their promenade production of Mother Courage and Her Children set around the Woolwich Dockyards.

Teatro Vivo has been exploring spaces like this for ten years. They specialise in putting on plays that make full use of their location and as performers they have become acutely attenuated to their surroundings and understand what producing theatre in a community space involves.

Mentioning this feeling of two very distinct communities co-existing, Kas immediately jumps in to describe ‘an extraordinary divide in this town. There is the [A206] road that no-one crosses.’ Working with Greenwich and Lewisham Young People’s Theatre (GLYPT) on Mother Courage they were keen to ‘get a situation where we can bring people from this side to that side.’

We didn’t want to go and do something in a public building and make the public feel they were alienated from that.

Kas explains that Teatro Vivo ‘didn’t want to be possessive about what we were doing. We didn’t want to go and do something in a public building and make the public feel they were alienated from that. We want to feel embedded in it rather than sitting on top of it.’

This idea that theatre should exist in a shared space is a strand that runs through all of Teatro Vivo’s work. Mark talks of their first show, Romeo and Juliet, where ‘we rehearsed in the park and a load of kids turned up and were, like, “what you doing in our park?” And we said “we’re actors, we’re doing Shakespeare” and they would sit and watch it. And those kids came to every rehearsal. And even told off anyone else who tried to disrupt it, because they felt like they owned it.’

It is this sense of ownership that seems so lacking from much theatre. Their style allows a fluidity that means they can work flexibly with the people who live in the spaces they use. Mark recalls that ‘in the first run we did of The Odyssey on Deptford High Street, there were kids who used to go up and down on roller skates all the time. They saw a bit of the show and wanted to know what was going on. We let them come and see the end, and then they became part of it. We got them to be gods on roller-skates who led the audience back down the high street.’

We got them to be gods on roller-skates who led the audience back down the high street. 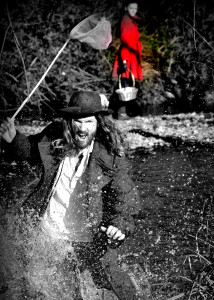 oint, theatre began to lose touch with the communal roots that has traditionally sustained it, and a barrier came down separating the audience from the actors. Teatro Vivo is a company seeking to re-forge that connection and Mother Courage and Her Children encapsulates that spirit. Their work is part of a wider project by GLYPT’s Artistic Director, Jeremy James, to expose children and younger people in Greenwich to the more professional aspects of theatre. So despite being part of an amateur group the cast were put through a rigorous process before auditioning for parts. Mark explains that ‘Jeremy wanted them to feel like they were taking part in a professional process and experience what it would be like if they were in that world… We did some workshops and then some auditions so we had quite a lot of exposure to them before we started.’

It is clear that the amateur spirit has rubbed off on the professionals, ‘they have been a delight, they are like sponges and are desperate to learn all they can. We try to give them the technique stuff they would get if they were at drama school, voice workshops early every morning, whatever was needed to find a way through for them… They all want a professional career and it’s a professional credit for them… and for some it will be a stepping stone to drama school.’

And so what led them to Mother Courage? Kas explains that they thought about ‘what might work on the world’s largest arms factory? Mother Courage felt like a good option of a show that was about war, quite pertinent.’ And with a lot of plays about the war around, how did you feel it could be made to stand out? ‘We have been talking about the politics and the political situation around the world a lot. We didn’t want to feel we were ramming it down the audience’s throats and I don’t think you need to. It is pretty clear the futility of the whole business by the end of the play. We felt we would leave the audience to go away with it rather than outwardly drawing parallels.’

Obviously with the situation in Syria; the whole thing is a crazy vicious circle that no one can really break because every time they try and fix one war they create a new one in the future.

The world has changed hugely in the 75 years since it was written, did you worry whether people would still find it relevant? ‘There’s a huge relevance to it. Obviously with the situation in Syria; the whole thing is a crazy vicious circle that no one can really break because every time they try and fix one war they create a new one in the future.’ This in essence is Mother Courage; the constant dogma, the switching sides, the villagers trapped between the two, and – at its core – the central figure of Mother Courage and her cart. ‘She never learns does she? [Brecht wrote it in 1939]… in this white heat. He had an urgency to let people see the futility of what they are about to do and warn them. And then war broke out anyway and he had to flee.’

So a promenade-style, amateur actors, a community chorus; what do you think Brecht himself would have made of your production? Kas laughs ‘I hope he would have liked it, in its ability to really connect with the audience not sitting behind a fourth wall. You do see the actors coming in and out, and you do see them picking up instruments and playing them. It doesn’t ask you watch it like it’s on a TV screen, it’s there, real and in front of you.’

From the outside it does seem like Brecht and Teatro Vivo are a match made in heaven. It is a form of people’s theatre, where the community can feel they own what has been produced because they can play a role in creating it and the stories told have a tangible reality because they are being told in a world they recognise.

You are not frightened to take risks because you know the people are trustworthy and will go there with you, and that is really exciting.

But what is it like to be on the inside? Kas replies ‘What I always wanted from my career was to work collaboratively and creatively and not be one of those actors who sat waiting for the phone to ring or the audition to come along. The thing is… that it feels so joyful because it is playful all the time, you are not frightened to take risks because you know the people are trustworthy and will go there with you, and that is really exciting.’

And with that I let Kas and Mark escape whilst I sit, idly imagining that they are, even now, in the forgotten corners of Woolwich discovering darkened alleyways and disused gardens, their minds brimming with possibilities.

Teatro Vivo will return to Deptford in the autumn with The Hunters Grimm – a dark re-imagining of the famous stories, as the brothers hunt the streets of Deptford looking for stories old and new. The Hunters Grimm will run 22 October 2014 – 8 November 2014. For more information on Teatro Vivo, check out their website.

After failing to run away with the travelling circus at an early age, Tim never had the chance to fulfill his dream career as understudy to the knife thrower's glamorous assistant. Putting this early set-back to one side, Tim has subsequently carved out a career in the equally glamorous trade of public policy. Outside of paid employment he can often be found hunkered down in the stalls of one of London's many theatres; pen eagerly gripped in one hand, paper held tight in the other and a glass of red wine wedged precariously between his knees.