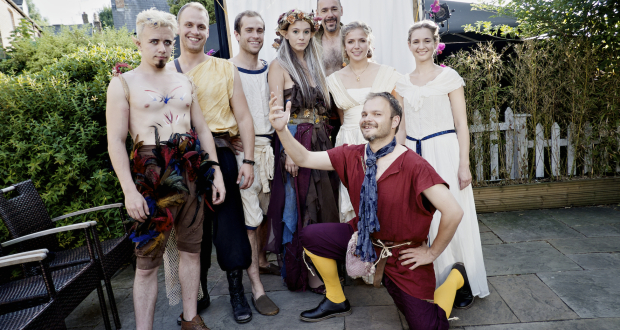 Pros: A dedicated cast give it everything they’ve got in a show crammed with great slapstick moments.

Cons: An open air event in mid September will always be a hostage to the weather and weakened an otherwise brilliant production.
A Midsummer Night’s Dream, Red Lion, Barnes – Review

Pros: A dedicated cast give it everything they’ve got in a show crammed with great slapstick moments. Cons: An open air event in mid September will always be a hostage to the weather and weakened an otherwise brilliant production. The formation of Permanently Bard was a flash of inspiration on the part of director Tom Tucker. The idea that Shakespeare’s plays might be staged in pubs sounds great in theory, but I was never quite convinced in practice. But the Red Lion has changed everything, a very English pub presenting the work of England’s greatest playwright.  The pub itself&hellip;

Energetic, extremely funny production that never allows the audience to get bored.

The formation of Permanently Bard was a flash of inspiration on the part of director Tom Tucker. The idea that Shakespeare’s plays might be staged in pubs sounds great in theory, but I was never quite convinced in practice. But the Red Lion has changed everything, a very English pub presenting the work of England’s greatest playwright.  The pub itself is spacious and welcoming with a beautiful beer garden providing the perfect stage for any play.

Although A Midsummer Night’s Dream is Shakespeare’s most performed play, a brief rundown might be useful for those unfamiliar with the story. The wedding of Duke Theseus and Queen Hippolyta is to be celebrated. However, the Athenian Court is in uproar; Hermia loves Lysander, but her father has arranged her marriage to Demetrius; she refuses to submit to her father’s wish. Helena has been seduced by Demetrius and has fallen madly in love with him. But Demetrius believes he loves Hermia. Meanwhile, Bottom and his company of players, the Rude Mechanicals are preparing to perform at the wedding of Theseus and Hippolyta. Bottom and Quince bicker over casting but start rehearsing in the forest.  King Oberon and Queen Titania also visit the forest.  Titania refuses to give up her pageboy to act as henchman to the King.  Oberon enlists the help of Puck to concoct a potion that might punish Titania. He also charges that Puck administer the same potion to Demetrius as punishment for his treatment of Helena. But he mistakes Demetrius for Lysander with confusing results as the effects of the potion become known.

With the audience lining opposite sides of the stage, we were in the thick of the action and inevitably became part of the show.  I even spotted ex Arsenal and England footballer Lee Dixon seated in the front row. Lysander didn’t waste the opportunity as he displayed a wedding ring to woo Hermia. Lysander asked Lee to hold the wedding ring and promptly grabbed the pint he was holding.  Well he did need some Dutch courage and downed the pint in one go.  If Lee was in on the gag, he didn’t show it; he looked every inch the disgruntled punter whose just been denied his pint.  Bottom happily joshed with the audience and pounced on stragglers returning late from the bar. He also gave a memorable rendition of Don’t Worry Be Happy which got a sing-song going in no time. There were some hilariously screwball moments, particularly Lysander and Demetrius chasing each other with an ironing board and iron respectively.

As the show progressed through three neat 45 minute acts, I was impressed by the sheer physicality of the players.  They tore around the set at such pace that sprint records must have been broken in the process. Lucy Aarden Southall playing Helena was a real trooper as, with a small cast on her arm, she turned in a cheeky and likeable performance.  Jack Harding as Lysander gave the role new dimension with a blokeish portrayal and Jonathan McHardy, like the rest of the cast, doubled up to great effect, taking on the role of Demetrius and Quince. Josie Catherine was charming and combative as Hermia. Richard Fish was quite simply a star turn as Bottom; David Chittenden as Theseus and Bryony Meredith as Hippolyta had a stately manner about them, but with tongue planted firmly in cheek. Cameron Harle as Puck held the piece together and gave the production its final flourish.

It really is difficult to fault a production that hits all the right marks. Audience participation sheds new light on one of Shakespeare’s wittiest comedies, whereas the fourth wall would once have kept audience and performers apart. It doesn’t feel the least bit stuffy, and actually I feel I understand the story better now than before. I smirked at people covering up with blankets at the start.  But by the end of Act I, it felt absolutely freezing and would have got a 5 star review had it not been for the cold. Theatre is all about creating memorable moments and A Midsummer Night’s Dream delivers them by the shedload.