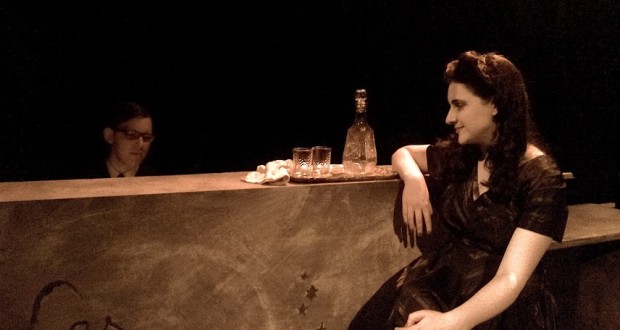 Cons: Fast-pace and at times weak dialogue made it evident that the musical was written around pre-existing well-known hits.
When You Say Goodbye, London Theatre Workshop – Review

Pros: Beautifully sung feel-good hits from Harry Parr Davies had the whole audience applauding after every song. Cons: Fast-pace and at times weak dialogue made it evident that the musical was written around pre-existing well-known hits. Celebrating the songs of Welsh wartime composer Harry Parr Davies, this brand new musical from Cardiff-based company Equinox Theatre is a beautiful addition to Camden Fringe Festival's theatrical offering. Having already enjoyed underground success in Wales, director Chris Morgan has now brought his heartstring pulling musical to Fulham's London Theatre Workshop. I must admit that I wasn't sure what to expect from a&hellip;

While rather short, the musical’s talented cast and strong score make it the perfect evening entertainment material for nostalgia-seeking theatre goers.

I must admit that I wasn’t sure what to expect from a musical whose plotline cryptically said it was ‘set against the backdrop of the Second World War’. I became more relaxed walking past the beautiful park that sits opposite the Eel Brook pub where the London Theatre Workshop resides. Inside lies a cosy pub with very friendly staff who are happy to chat and joke with you whilst waiting for the play to begin. After ascending the staircase to the blacked out space, we were greeted in French by one of the actresses and led to our seats. The minimal yet immersive set design featured a table and chairs and a piano decked out to look like a French bistro, complete with romantic low-level lighting.

When You Say Goodbye centres around newlywed couple Huw (Sam Rabbitt) and Gwen (Danielle Marsh), who at the start of the play are enjoying the innocent happiness of their newly married status in Wales. Their story is interjected with narration from a mysterious, seemingly omniscient French café owner, Colette (Lauren Brown), who hints at the possibility of a tragic ending for the two lovers. As the story continues, we can only watch on helplessly as Huw is sent to Normandy in anticipation of Germany’s invasion. Initially optimistic about their situation, the ambiguity surrounding the war gradually tears away at their happiness and reality sets in with fatal consequences. Featuring a strong cast of excellent singers, Sam Rabbitt and Danielle Marsh channel their characters’ naïve sunny dispositions through the upbeat tunes of Harry Parr Davies, including well-known hits ‘Wish Me Luck As You Wave Me Goodbye’ and ‘Sing as We Go’. However, rather than being a straight up tribute to the Welsh composing wonder, Equinox Theatre have cleverly peppered the musical with the more mournful songs of Marguerite Mannot, tinging our characters’ doubts with melancholy.

Although Gwen and Huw are undeniably charming, the person who stole the night for me was Lauren Brown as Colette. Perhaps it was because she had to sing in a second language (with an amazing French accent no less), but her songs were filled with this raw, forlorn aching that made her feel more real and three dimensional than her more youthful counterparts. The songs were backed by David Merriman’s flawless live piano accompaniment.

Whilst the songs and the singing itself were wonderful, I did find fault with the plotline. Overall the play lasted just under 90 minutes, and before I knew it we had gone from Huw and Gwen’s first meeting to their dismaying correspondence whilst forced apart. I suspect this was a side effect of the musical having been written around pre-existing hit songs, but the whole story just felt a little too fast-paced for me and the dialogue in between songs was a little weak. Regardless, I thoroughly enjoyed this beautiful and touching wartime romance from Equinox Theatre and the applause that arose at the end of every song only convinced me that the rest of the audience felt the same way. Special mention should also be made to the actors who persevered despite sweltering away in coats and full army attire in the heat! A strong musical offering from the Camden Fringe Festival that I think Harry Parr Davies would be extremely proud of.