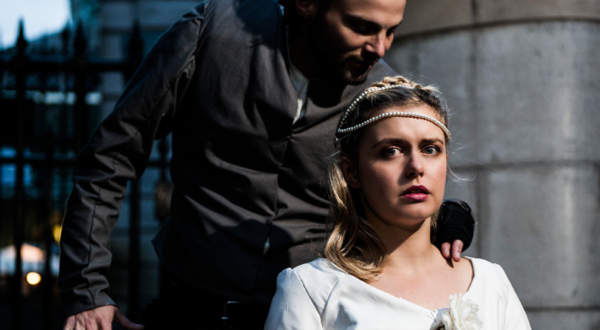 Pros: An outstanding portrayal of Richard III by David Hywel Baynes. Cons: You’ll need to hope and pray for decent weather. Shakespeare’s violent, bloody, and wicked play Richard III is a tempestuous journey through an immersive world of Shakespearean war-torn England. Throughout the evening, the audience travel along with the characters as they head from set to set. Time is spent both outside and inside the historic Saint Paul’s church in Covent Garden as we uncover the story of Richard III’s violent and turbulent rise to the throne. The scenery is minimal but impactful. Most of it is cleverly&hellip;

A lively and well-acted interpretation of a Shakespearean classic.

User Rating: 3.45 ( 9 votes)
Shakespeare’s violent, bloody, and wicked play Richard III is a tempestuous journey through an immersive world of Shakespearean war-torn England. Throughout the evening, the audience travel along with the characters as they head from set to set. Time is spent both outside and inside the historic Saint Paul’s church in Covent Garden as we uncover the story of Richard III’s violent and turbulent rise to the throne.

The scenery is minimal but impactful. Most of it is cleverly and beautifully done using sharp, jutting bamboo poles, colourfully painted and lacquered as needed for the different sets. The scene in which Queen Elizabeth walks through a field of red and white ones is gorgeous, and the Game of Thrones allusion that surrounds the throne inside the church is not at all unwelcome. The lighting on the various stages is very clever too, and the softly flickering orange candle light in the final church scene is wonderfully atmospheric. Appropriate background sounds accompany the different settings, but they can occasionally drown out the character’s dialogue. They are best used in the camp scene prior to the battle, but they do well to enhance the atmosphere throughout too.

The actors deliver a strong performance as individuals, and as a cast they make a wonderful collective, swapping roles with ease. Mark Hawkins is almost unrecognisable as he goes from role to role; he absolutely shines as the spitting and vengeful Queen Margaret. In this production, men play women, and women play men. There is no comedic or drag element involved; gender of the actor is completely irrelevant as to how they bring the part to life, and it’s something that is to be congratulated in this performance.

The cast are all enjoyable, but the absolute star of the show is the outstanding performance from David Hywel Baynes as Richard III. Baynes’s Richard III is a sociopath. He grovels to those around him in a piteous, snivelling manner, but his motives are abundantly clear as he turns and faces away from the victims of his violence. He is capable of no remorse and yet brings a surprising humour to his role. That he adapts his body so adeptly to such a twisted, contorted role further adds to the character. Baynes is at his best when pitted against the initially meek and harassed Laura Wickham as Queen Elizabeth. One of the strongest scenes in the play is a battle of wills between the two, and it is at this point that Wickham truly opens up and comes alive as a defeated and bereaved but enraged mother.

It is extremely challenging to pick a favourite part of this performance. Is it the haunting finale, with the voices of the female singers soaring high above the smoke and body of the deceased king? Or is it the nightmare sequence in the camp tents prior to the battle in which Richard’s devolution is raw and feverish? I may need to see it again to be sure.

This is a very good and extremely easy to follow production. I highly recommend seeing it, but do note: you must dress warmly and be prepared for rain in this production. Most of it is open air, and it would be an absolute shame to have a performance of this high calibre ruined through weather.