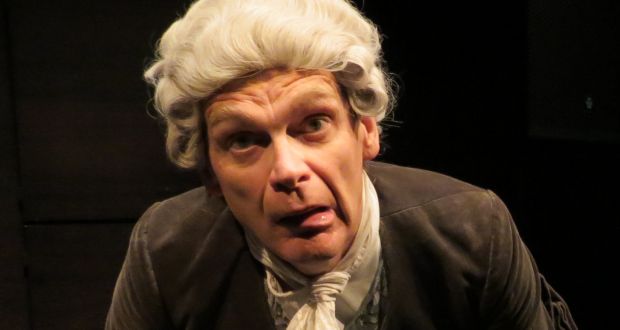 Pros: A light hearted romp of a play, this is an artfully conceived and superbly acted one man show.

Pros: A light hearted romp of a play, this is an artfully conceived and superbly acted one man show. Cons: Catch it while you can, it’s only at the St. James Studio Theatre for a short five day run. This classic 90 minute adaptation of the 18th century novel The Life and Opinions of Tristram Shandy Gentleman by Laurence Sterne, pays testimony to the fact that truly great writing is fit to stand the test of time. It is no wonder then that this latest run at St. James Studio Theatre sees Stephen Oxley reprise his role once again&hellip;

This classic 90 minute adaptation of the 18th century novel The Life and Opinions of Tristram Shandy Gentleman by Laurence Sterne, pays testimony to the fact that truly great writing is fit to stand the test of time.

It is no wonder then that this latest run at St. James Studio Theatre sees Stephen Oxley reprise his role once again for fresh audiences – this time in aid of St Andrew’s Youth Club Charity. It is a role Oxley has been perfecting for over a decade and, if last night’s audience reception is anything to go by, is continuing to prove as popular as ever.

This one-man virtuoso performance of 18th century gent, and class A buffoon, Tristram Shandy is full of laugh-out-loud moments, bawdy physical humour and whimsical digression. Oxley’s Shandy is quite simply a joy to watch. His grasp of Sterne’s florid prose is performed with such an eloquent lightness of touch and love of the language; it’s clear to see Oxely’s training with the Royal Shakespeare Company has been put to good use.

This appropriately titled Cock and Bull story is full of absurd observational humour, loosely tracing the narrative of Shandy’s conception, childhood mishaps and unconventional family life. Each character is energetically and skilfully brought to life by Oxley. He has become adept at navigating a complex script featuring rambunctious impressions of mother, father, maids, midwife, Parson Yorick and family Doctor. Not to mention re-imagining the part of his uncle Toby in his military mishaps and amorous misadventures with the widow Wadham, along with many humorous asides to the audience.

For many actors, the physicality and range required would make this an extremely challenging role, but in the hands of Oxley it all comes together rather beautifully. There was never a lull in pace or engagement as the audience laughed heartily through explicit details of Shandy’s birth, tales of collapsed noses, accidental circumcision and the reasons for his father’s fits of melancholy.

The condensing of this celebrated and important novel into a fun and frolicsome form resonating so keenly with modern audiences is something of which Oxley should be very proud. The play retains both the humour and gentle philosophical sentiments of the original work, making it as entertaining for its farcical and egocentric musings as it is endearing for the easy sophistication of Oxley’s performance.

The beautifully designed, intimate surroundings of the downstairs studio at The St. James Theatre perfectly complements the stand-up model of this play, ensuring there is plenty of audience interaction as Oxley’s Shandy strides flamboyantly across the small stage set, occasionally reaching out to kiss a lady’s hand or direct a quip.

Though the set itself is minimal, comprising a chair, chest and a few books, it adds just enough touches to set the scene with period detail, leaving plenty of room for the main man to dominate the stage.

This is a play faithful enough to please the most serious fans of Sterne’s work and the perfect introduction for those unfamiliar with the tales of this most famous English raconteur.

Previous: A Day in the Death of Joe Egg, Greenwich Theatre – Review
Next: In Good Company, The Place – Review