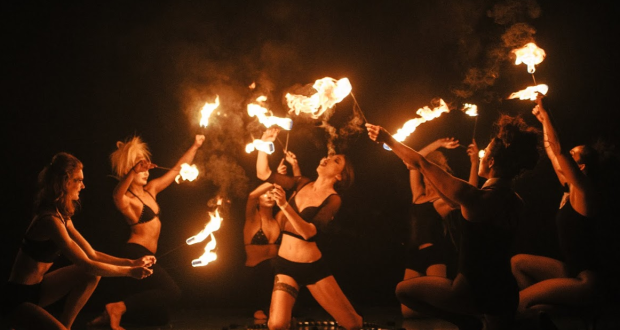 Pros: Seeing the acts up close makes you appreciate the work that goes into putting a circus show together. It definitely makes the performance come alive.

Cons: The feeling that a performer is going to fall from a rope and land on you could be a downside of the proximity.
Midnight Circus, Jackson’s Lane Theatre – Review

Pros: Seeing the acts up close makes you appreciate the work that goes into putting a circus show together. It definitely makes the performance come alive.   Cons: The feeling that a performer is going to fall from a rope and land on you could be a downside of the proximity. The London based company Aircraft Circus has put together a risqué and naughty show, Midnight Circus, for audiences to enjoy at the stage inside Jackson's Lane Theatre. The show takes off the mask of you might find in other well-known acts such as Cirque Du Soleil and Circus&hellip;

This show is filled with a dark, lurid energy that will leave you wanting more. The staging, concept design and gravity-defying feats give an amazing perspective into the raw nature of circus performance.

On top of all the contortionism and sexiness happening on stage, it was quite surprising to discover a story unfolding. I got hints of a more elaborated performance rather than just as succession of classic circus acts from the introductory number: Alex Frith, who also is the company’s artistic director, wildly moved to the rhythm of the live band under the skillful direction of Dave Kemp. It created a doorway that allowed the company to weave a more intricate plot design, adding intensity to the already heart stopping numbers.

The numbers cover the range of what you would expect for a dedicated and passionate company: static trapeze, rope, acrobalance, aerial hoop, silks…plus a few added ones that work incredibly well with the racy nature of the show: stripper pole, fire spitting and metal grinding from both a metal block held at the arm, and another placed on top of the crotch. I’m still not sure if that number is urologist approved, but the performer was definitely having a blast sending the sparks flying.

To give you a better idea of how these elements come together; one of my favourite numbers featured the silks; two long satiny ropes that glowed in an ice-blue light as the performers, a man and a woman, climbed up and proceeded to stretch and bend all over one another.  He went up first, securing his place by tangling the ropes around his legs and turning upside down, then lifted the woman up. From that moment we watched an elegant sequence of gravity defying figures. As they revealed more poses, the couple would sneak a few moments to themselves, almost like unwatched lovers, making the number more and more suggestive.

It is a very well put together show indeed, lighting, stage effects and music included.  The small DJ space situated on a platform above the main stage gave us brief glimpses into the working muscle of the eerie and heavy metal soundtrack. Additionally, there were moments when Kemp filled the theatre with the spine chilling wailing of a saxophone.

This is no ordinary circus act, but the thing that won me over was the fact that every number had an outstanding level of skill. You could really feel all the hours of training and practice the company puts in.