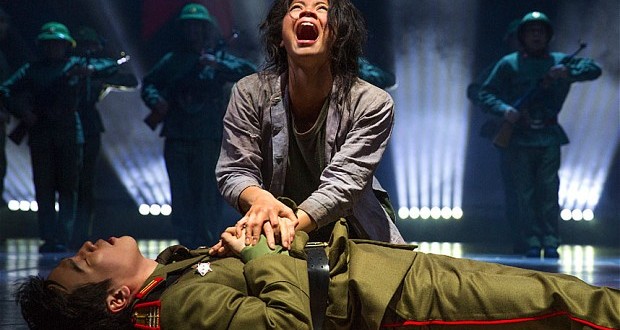 Pros: Claude Michel Schonberg’s score is as beautiful as ever. Miss Saigon has some of the best songs in any musical.

Cons: Some of the staging and singing is not as impressive as it could be.
Miss Saigon, Prince Edward Theatre – Review

Pros: Claude Michel Schonberg’s score is as beautiful as ever. Miss Saigon has some of the best songs in any musical. Cons: Some of the staging and singing is not as impressive as it could be. Alongside many other people, Miss Saigon is my favourite musical of all time, so when it was announced last year that it was coming back to the West-end, the anticipation was pretty high. Miss Saigon is based on Madame Butterfly but set in the Vietnam War. A young woman, Kim, (Eva Noblezada) goes to Saigon where she is coaxed by The Engineer (Jon&hellip;

Miss Saigon is a stunning musical and will entertain audiences for many years to come but this revival doesn’t quite live up to die-hard fan’s expectations.

Alongside many other people, Miss Saigon is my favourite musical of all time, so when it was announced last year that it was coming back to the West-end, the anticipation was pretty high.

Miss Saigon is based on Madame Butterfly but set in the Vietnam War. A young woman, Kim, (Eva Noblezada) goes to Saigon where she is coaxed by The Engineer (Jon Jon Briones) into becoming a prostitute in a bar. On her first night, she meets an American GI, Chris (Alistair Brammer) and they fall in love. In spite of their attempts, when the Americans pull out of Vietnam, she is left in Saigon as the city falls to the Vietkong. She falls pregnant and is left to cope alone, Chris moves on but his past eventually catches up with him.

For those who have seen it before, you will notice some changes, some for good, some not so much. There were some word changes that result in the song no longer flowing properly. As for the new song for Ellen of ‘Maybe’ it just didn’t add anything to her character and the melody of the song may be a bit prosaic for modern audiences.

I was, however extremely pleased to see one addition to this revival, the song which never was, ‘Too Much For One Heart’. Written for the original but never seen on stage, it is really lovely for fans to finally see it. The show is also much more gritty, violent and sexy, reflecting much more the reality of war.

Other changes have resulted in more rounded characters. Thuy, Kim’s betrothed and who later becomes a commissar following the end of the Vietnam War, is definitely a character that has grown. Previously he was just an angry man coming to take what was rightfully his. Now he is much more subtle, and Kwanh- Ho hong’s performance is certainly emotional and powerful.

The rest of the cast varies significantly, with the stand out performances from Eva Noblezada and Jon Jon Briones. Incredibly, Noblezada makes her professional debut in Miss Saigon (following in the footsteps of her aunt, Annette Calud, who starred as Kim on Broadway) but easily holds her own against the more experienced cast members. She comes to this role with poise, feeling and a truly stunning voice with echoes of Lea Salonga (who originated the role in 1989). Jon Jon Briones is wonderful as the Engineer. He is charming and yet conniving, seedy, funny, savage, ruthless and sleazy and commands even an empty stage; everything the Engineer should be.

Unfortunately, Alistair Brammer and Hugh Maynard don’t quite hit the spot as GI’s Chris and John. Maynard, when he is singing with others, seems to step up a notch but when on his own, he just isn’t powerful enough. Brammer as Chris occasionally struggled to hit the notes and only shows any true emotion in one scene. All in all, the depth wasn’t there; the tears didn’t seem to be flowing around me at the points that I would expect.

The moment everyone waits for – the life size helicopter descending on to the stage, was unfortunately not as impressive as it could have been, it is somewhat smaller and partly done with a projection. Miss Saigon will always be a massive spectacle. It is sold out at weekends until October and I don’t doubt that it will continue to be popular but if you are already a fan, I think it may leave you a little disappointed. However, if you are new to it, I urge you to go and enjoy the beautiful music, emotional story and stunning talent of Eva Noblezada.