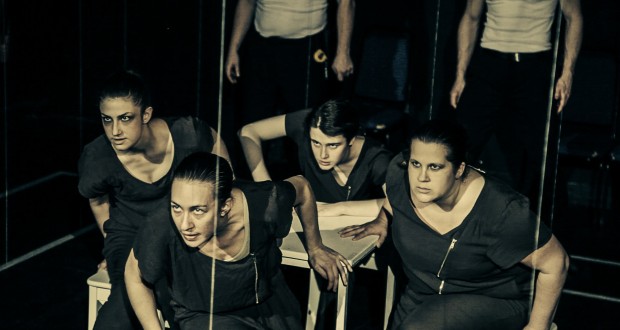 Pros: Impressive physical unity among the cast. Crisp and unsettling harmonies that linger long after the performance ends.

Cons: Some of the immersive aspects were a little wearying.
Laqueum, The Rag Factory – Review

Pros: Impressive physical unity among the cast. Crisp and unsettling harmonies that linger long after the performance ends. Cons: Some of the immersive aspects were a little wearying. Laqueum is set in a women’s prison to which both the audience and the cast are consigned. From the moment you arrive at the venue the theme of gender, and the way in which our sex separates and constrains us, is emphasised. Men get given a sticker saying ‘Officer in training’, whereas women get the word ‘laqueum’ ink-stamped on their hands (already giving the women the short straw – what an&hellip;

An intricate and sometimes disorientating piece of immersive-style theatre that explores the darker side of female suffering and despair.

User Rating: Be the first one !
Laqueum is set in a women’s prison to which both the audience and the cast are consigned. From the moment you arrive at the venue the theme of gender, and the way in which our sex separates and constrains us, is emphasised. Men get given a sticker saying ‘Officer in training’, whereas women get the word ‘laqueum’ ink-stamped on their hands (already giving the women the short straw – what an inconvenience to have to wash it off afterwards!). A prison officer escorts you to your seat in groups according to gender. You enter into a dark space with the distinct impression that you’re walking into something that you might not come out of again. It’s worth noting here that the play’s title is a Latin word that translates as ‘noose’ or ‘trap’.

The Rag Factory is an affordable arts space just off Brick Lane and makes a good choice of venue for creating this initial suspense. The lights go up to reveal a simple but impressive set design. The audience are sat on all four sides facing the prison G-block cell, a cube constructed from ceiling-to-floor wires that act as the bars. Four incarcerated women are within. We follow their growing desire to escape from the physical torment and extreme abuse of the three male prison guards. They are all at the mercy of a masculinised female warden played by Siobhan McMillan, who sets the deprave rules of the prison. While the warden is dressed head-to-boot in black, the women’s flesh coloured uniforms and bare feet highlight their vulnerability as mere bodies.

Huntley Street have worked hard to produce a dizzying mix of polyphonic singing, physical theatre, and a montage of new writing and texts from classical and popular sources. You’d be hard pressed to find another play that incorporates text from Euripides, Shakespeare, Moulin Rouge, Disney’s Beauty and the Beast and plenty besides. The staging and the music are complex and very well directed. The live violin accompaniment provides a discordant, eerie touch. The performances from this international cast are equally as strong. All the actors offer something unique, both vocally and physically.

The enigmatic character L – the women are assigned letters for names – played by Helena McColl, is the central focus. The play asks you to question who she is. She may be more than just another new inmate. Does she even exist? Or is she perhaps a fantasy of the women’s desire for freedom and escape from under the sinister, dehumanising male control?

I wasn’t sure what benefits there were to some of the immersive aspects of the piece. Some audience members participated by shouting out statements told to them by the guards and at one point half the audience is forced to move from one side to the other. One person clearly didn’t want to participate, until they realised that if they remained seated, they would be the only person on that side of the room. For a 75 minute show, I felt slightly drained by the end, partly from the harsh lighting that made it difficult to see sometimes, but more so from trying to figure out so many disparate elements of the performance at once.

I’m encouraged by the company’s hopes to develop the piece into a full scale, original installation theatre piece. I suspect that their hope of using original text, compositions and lyrics will bring a cohesion and potency to the piece that was hard to achieve with so many contrasting ideas and references. Meanwhile the current show is worth seeing too, for it provides an unconventional insight into the psychological toll of the abuse of women imprisoned within a world of suffering from which there is no escape.