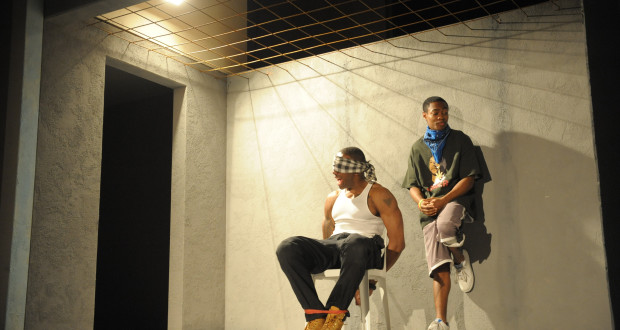 Pros: Great performances, and laugh-out-loud funny. Cons: The comedy and pathos never gelled together. Apart from Goldie (who in the programme is given the enviable title of ‘music pioneer, contemporary/graffiti artist, drum &amp; bass icon, DJ, actor and producer’) Kingston 14 isn’t a ‘star studded show’. However, most of the actors in this all-male cast are ‘that guy from that thing.’ ‘That thing’ in the case of Brian Bovell, who played Corporal Marcus Blake, is The Bill, I realised after spotting Police Constable Jim Carver in the audience. Indeed Bovell was right at home in this piece about the&hellip;

Not spectacular but funny and with enough surprising turns to keep you entertained.

Apart from Goldie (who in the programme is given the enviable title of ‘music pioneer, contemporary/graffiti artist, drum & bass icon, DJ, actor and producer’) Kingston 14 isn’t a ‘star studded show’. However, most of the actors in this all-male cast are ‘that guy from that thing.’ ‘That thing’ in the case of Brian Bovell, who played Corporal Marcus Blake, is The Bill, I realised after spotting Police Constable Jim Carver in the audience. Indeed Bovell was right at home in this piece about the Jamaican police and their struggle to solve a murder case while being watched by visiting English detective, the prim and proper James (Derek Elroy), and being hounded by local gangster Joker (Goldie) and his crew.

Despite the subject matter, the play was very funny, with the Jamaican police officers resembling wannabe teen gangsters and Elroy looking very English amongst them. This difference was highlighted by TV screens, which subtitled the dialogue of the Jamaican characters who speak in a Patois dialect. Although I was at first grateful for the help in understanding the lines, the text became a crutch and a distraction. If you really concentrated, you could understand the dialogue; it’s not all that different from English once you get used to it. In the second half, I resorted to shielding my eyes to avoid them flicking to the screens and missing the onstage action.

The decision to include the screens was one of a few technical issues I had with the play. The set design was impressive, slipping seamlessly from police station to back alley, to Joker’s safe house. However, I was never convinced by Joker’s cell, which slid out and hovered above much of the action. I couldn’t help but wonder if its sole purpose was to buy a side-lined Goldie more stage time. I don’t often comment on props but the guns in the play drove me up the wall, as they so obviously sounded empty and yet the characters continued to cock them – a minor issue maybe but one that bugged me.

The comedy that dominated the first half of the show switched abruptly just before the interval to a much more serious tone when two of the Jamaican detectives, Carl (Charles Venn) and Neil (Ashley Chin) are kidnapped by Joker’s gang. The solemn and the comedic are slammed awkwardly against one another and a balanced blend never quite materialises. There is one scene, however, when there is a kind of harmony struck and that is between captive detective Carl and young gang member Adrian, played by Gamba Cole, who impresses on his professional stage debut. This scene was quiet and moving but also funny. It is the relationship between these two characters that has stuck with me well after curtain.

Despite what is purported in the press materials for the show, this is not a play about an English police officer in Jamaica, nor is it very much about race (if you expected as much given Williams’ famed Sing Yer Heart Out For The Lads). But it does have something to say about Jamaica, the spirit of the island and how this still lives in its people. Although I can’t help but feel that this message could be more cleverly interweaved throughout the play rather than tumbling out all at once, the feeling of it was definitely there.