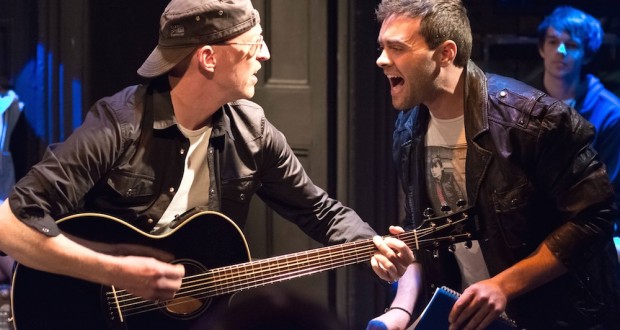 Credit: From the Fog Productions

Pros: Powerful songs in the second act, cool set design, heartfelt performances from the cast. Cons: The story holds few surprises. The Landor is one of the best pub/theatre setups I've yet seen. The cozy bar downstairs full of squashy couches and mismatched chairs looks like a great place to while away a weekend afternoon, and there's even a garden if it's sunny. In the upstairs theatre, The Landor has done some very clever things with what could otherwise be a cramped and limiting space. The Landor always provides live music for its shows, adding immediacy during the songs. Also notable&hellip;

A solid contemporary musical at a great venue.

The Landor is one of the best pub/theatre setups I’ve yet seen. The cozy bar downstairs full of squashy couches and mismatched chairs looks like a great place to while away a weekend afternoon, and there’s even a garden if it’s sunny. In the upstairs theatre, The Landor has done some very clever things with what could otherwise be a cramped and limiting space. The Landor always provides live music for its shows, adding immediacy during the songs. Also notable in this production are the monitors hung along the back wall, adding multimedia depth during various scenes.

In addition to writing the music, book and lyrics for Best of Friends, Nick Fogarty also takes on the role of the villain of the piece, Jim Ryan. Jim and his friend Mike Chariot (Aidan O’Neill) start a band together in their youth, dreaming of the big time. But when things aren’t going as planned, Mike auditions for and eventually wins the huge national talent show The Face and Voice. In his success, he leaves behind all his former friends and bandmates. Jim doesn’t take this well. Neither does Mike’s girlfriend Natalie (Rosie Glossop), who turns out to be pregnant. When Mike informs her the record company has asked him to pose as single in order to increase sales, in a fit of pique, she decides not to tell Mike about the pregnancy and leaves him.

Twenty years pass. Mike grows increasingly disillusioned with his corporate record label and he decides to go back to his roots and buy the old youth club where he and the band used to practice. He develops it into a venue for nurturing new musical talent. Meanwhile, Jim has become deeply involved with the nefarious underworld of the London crime scene, demonstrated in his villainous solo “Life of Crime.” Imagine Putin singing about pride in his ruthless skill at drowning a surplus basket of kittens, or something. That’s what the glowering Fogarty singing “Life of Crime” is like. (So much glowering! So villainous! You can just tell Jim is the kind of guy who really doesn’t know how to lighten up.)

Meanwhile, Natalie’s son Taylor (Alex James Ellison) has grown up to love music more than anything, just like his father. She’s told Taylor that his father died before he was born, so when Taylor inevitably rocks up at the youth club, he and Mike have no idea who the other is. Between that and Mike’s hustle to get enough money to keep Jim from being a controlling partner of his new venture, hijinks inevitably ensue. Fairly predictable hijinks, but the cast is charming enough to make it worth watching.

Musically, the stronger stuff seems to be in the second act, with O’Neill and Glossop’s duets: the ballad “Alone for My Sins” and the playful and up-tempo “First Kiss” getting especially good receptions from the audience. There’s a warmth and chemistry between O’Neill and Glossop that’s shown particularly effectively in “First Kiss.” Sarah Goggin’s moving solo “Stay” also enriched the second half. As the bustling record producer and former “Face and Voice” runner-up Lilly Star, Serena Giacomini gives a sparkling performance, and I would have liked to hear more from her. Ellison’s portrayal of young Taylor is earnest and likeable but a bit hampered by sound, but uninspiring songs.

There are also a series of unintentionally comedic moments involving O’Neill’s misbehaving snap-front shirt. I, for one, hope nobody takes it into their head to get the guy a new wardrobe, because the frisson of excitement as we all wondered when it was next going to accidentally pop open was practically another subplot.

In sum, Best of Friends won’t leave you with any burning questions about life, but it’s an entertaining ride.