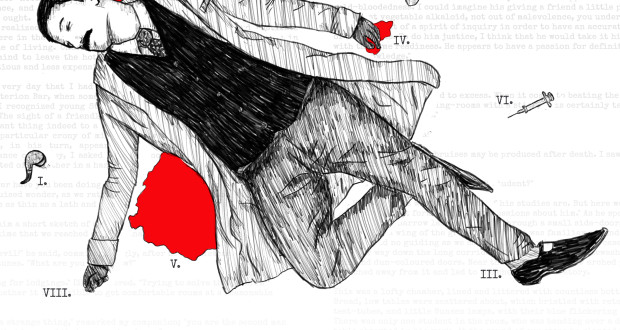 Pros: Engaging and comic performances by the strong two-man cast.

Pros: Engaging and comic performances by the strong two-man cast. Cons: The play’s wordy script becomes a little confused. The famous Sherlock Holmes and John Watson have had a great deal of screen time in recent years, and this small scale play, featuring just two cast members - Nico Lennon and James McGregor as Sherlock and John respectively - is a very nice addition to the plethora of current adaptations of Conan Doyle’s most enduring detective couple. Now in the 1930s, Sherlock Holmes’ and John Watson’s golden days of detection are behind them, and the team, or rather just&hellip;

Strapped for cash and remembering the good old cases, The Final Revelation is a playful adaptation of England’s most famous detective duo.

The famous Sherlock Holmes and John Watson have had a great deal of screen time in recent years, and this small scale play, featuring just two cast members – Nico Lennon and James McGregor as Sherlock and John respectively – is a very nice addition to the plethora of current adaptations of Conan Doyle’s most enduring detective couple.

Now in the 1930s, Sherlock Holmes’ and John Watson’s golden days of detection are behind them, and the team, or rather just John, is relying on romanticised redrafts of old cases to pay their way. Sherlock’s cocaine habit is wearing at both his health and John’s nerves, and the single room that they have been ensconced in for days is barely holding up to their bickering. Plus there is the worrying matter of Sherlock having to lead a waltz despite an unfortunate disliking of physical contact, and the possibility of him having committed a murder to contend with.

Although writer Tim Norton’s portrayal of two of the most iconic characters in English literature wasn’t especially memorable, there was no denying that it was both very amusing and true to the original. From observing the audience it seemed that it was popular with the younger women of London in particular, an attraction perhaps riding on the explosion of two Sherlock adaptations on either side of the Atlantic, BBC’s Sherlock and CBS’ Elementary, not to mention the two blockbuster films from Warner Bros. For fans of those productions this portrayal of the beloved Holmes and Watson would satisfy, with ample nods to implied homosexual subtext encouraged by a wonderfully camp Watson, and plenty of the usual routine of John’s excruciatingly slow penny-dropping moments endured by Sherlock.

In terms of production, the set, arranged on a rotating stage, was intricate and well dressed. With ample puffs of dry ice it gave the stuffy little room a sense of the antiquity that would be imagined for a traditional, dim and smoky Sherlockian world. Placing the story in the 1930s seemed to have no real significance, but as an admirer of the Art Deco period, it was nice to see some original set pieces used.

The script at times did become a little long-winded and verbose, which may have been a little difficult to keep up with for some of the younger members of the audience, but it didn’t seem to impede the progress of the play too much. Against the dashes of playful and light-hearted humour, an atmospheric, metaphorical moment brought some depth to the themes of the play when all the clocks stopped, signalling that time, unbeknownst to Sherlock and John, was running short. Although this particular moment did seem to promise a turn for the melancholy, the play’s conclusion did leave a little to be desired. The grand final revelation became a little confusing instead of enlightening, and a sudden mention of Conan Doyle himself in the final moments of the play brought an unexpected self-awareness that admittedly felt a little jarring.

Overall, The Final Revelation of Sherlock Holmes is an enjoyable and entertaining production, an easy watch for Conan Doyle fans, and – for younger viewers – an accessible introduction to the world of Holmes and Watson.

Previous: Tell Me on a Sunday, The Duchess Theatre – Review
Next: Fucking Outside the Box, VAULT Festival, Waterloo Tunnels – Review

Screenwriting student. With an unhealthy love for musicals that can’t and won’t be tamed, she spends a lot of her time squealing in the West End. Having next to no friends, she spends the rest of her time writing, writing, writing. She will happily devour any and all kinds of theatre, and being born and bred in Brighton has made her open to the weird and wonderful. She is learning French and Cornish alongside writing, both of which will be equally useless to her. So is knowing every single word to Les Misérables, but someone has to.