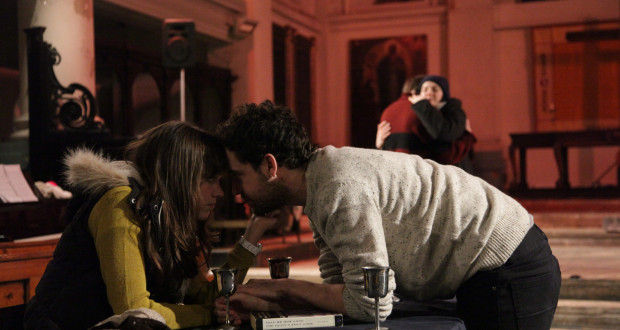 Cons: Despite a well-written script, I personally found the content self-indulgent and same-y in a way that made the production drag on.
Sun, St Leonard’s Church – Review

Pros: An inspiring site-specific venue in St Leonard’s Church, used in it’s entirety, quite skilfully. A well constructed show supported by excellent production values and strong performances. Cons: Despite a well-written script, I personally found the content self-indulgent and same-y in a way that made the production drag on. Every once in a while I come across a production that I want to give both 2 stars and 4 stars to at the same time, and Sun falls into this category. As a whole, the production cannot be faulted. It is written and constructed with obvious skill; directed to&hellip;

This is a well put together production from the writing to the direction to the performances, that has positioned itself to appeal to a very specific taste in theatre and art.

Every once in a while I come across a production that I want to give both 2 stars and 4 stars to at the same time, and Sun falls into this category.

As a whole, the production cannot be faulted. It is written and constructed with obvious skill; directed to use the vastness of St Leonard’s Church reasonably well and to encourage, for the most part, natural and honest performances; it utilised sound and lighting in ways that I would imagine might be tricky for a non-theatre space and supported the performance well; and the acting was impressive. To these aspects of the production, I would award four stars.

My hesitation in giving the entire show four stars lies in the subject matter alone. The play is a contemplation on the end of the world, presented in an absurdist style and in which the components of the piece seem disparate and disconnected (although they usually mean something to someone) and typically lack a cohesive narrative. I found the production to be rather self-indulgent with not much new to say on the topic.

However, while the production begins with scenes and characters which you’re not quite sure will be revisited (and are not), it forges on to reveal a through-line for the production as a whole, exposing the writing to be rather clever.

Examining different human relationships dealing with their last night on earth, there were moments of poignancy and beauty, specifically the scene of a break up of a marriage that was played once by one pair and repeated simultaneously by multiple couples in different ways. Additionally, the moment at which the audience along with the characters experienced the “apocalypse” was particularly impactful as we sat in the darkness of the church with the sound of water and waves crashing around us.

However, there were also the cliché moments that you see in many artworks about the end of the world: the nonsense conversation, the big emotional moments – cheesily mended relationships, scenes of chaos and destruction and loss, moments of hope and life set amongst death – it’s all in there.

Most interesting was perhaps the representation of what comes after the end of the world and what people both know and not know about how the world used to exist – a scene that was at once uncomfortable, despairing and funny.

The church space was used well, creating an intimate setting on the ground level while still using the balcony to suggest ‘other’ places and spaces. Particularly impressive was the use of the church acoustics and echo to augment the weight of what was happening to the world and to the people in that small space. Sinking the audience into the darkness (and cool temperatures) that the characters living their last days on earth are enduring was also effective, if slightly too long.

A solid and thoughtful piece as a whole, this production is best for those who are open to an alternative theatre, who are willing to challenge and be challenged.