Written and directed by Matthew Radway
★★★

Pros: Great British one-liners and an enjoyable first half.

Cons: Falters in places, mostly towards the end.

Our Verdict: A good work in progress that can and, no doubt, will get better. 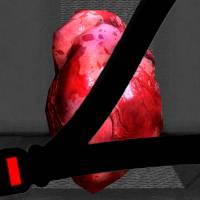 With a living room over-flowing with Princess Diana memorabilia, the stage is set and we immediately get a clear idea of who we think this Diana-obsessed couple are. Queen of Hearts is an interesting look at the fickle nature of entertainment and how far people will go for the sake of ‘good TV’. The play, a work in progress by Matthew Radway, shows us just how easily we can be led into doing things we’d never imagine ourselves agreeing to. We revel in watching the poor couple get themselves so far into a situation that gets widly out of control. This aspect of the plot is more worthwhile than the other bits of pyscho-analysis that the story tries to do. Using Princess Diana’s death as a focal point for the couple being interviewed, their own lives are psycho-analysed, resulting in disaster.

Both Christopher Rithin and Harriet Layhe do well in their roles as loved up partners and work nicely off one another. Layhe’s performance as Elaine stands out and I thought her fluctuation between vulnerable and slightly unhinged worked very well for the first half. However when the plot takes a very strange turn towards the end, I felt a lack of commitment from all the cast. From the opening scenes, I thought we were all set to descend into farce or a healthy exercise in absurdism. What we get, however, doesn’t do this but instead wavers between heavily dramatic and farcical. It felt as if the cast too were uncomfortable with this uncertainty.

That being said, the first half of this piece is rather enjoyable. There’s plenty of fun to be had at the expense of both the couple and the TV journalist filming them as we begin to get hints of the chaos that will ensue. The script is funny, with plenty of one-liners that are well-delivered, hitting the mark.

What spoils things is the climax of the play, which is vastly different in tone from the rest and did not make any impact upon me. I was unsure and I got the sense that others were confused by it too. Half of us wanted to laugh at the madness unfolding and the other half realized the grave turn of events signified that this was now definitely not funny. I felt the play could have been just as gripping without trying to do so much in the final few minutes and I wonder if perhaps in the case of this play, less is more. Unfortunately for me, if a play doesn’t end strongly, it doesn’t end. However, there were worthwhile moments inbetween and I am confident that the climax can be developed and that the play as a whole could go quite far.

Previous: Podcast: An Interview with Jamie Nichols
Next: The Thebans Season, The Scoop