Pros: Storytelling at its best, aided by a wondrous cast.

Cons: The continuous melodrama may not appeal to all.

Our Verdict: The American Plan is worth taking a look at. Passion oozes from the cast as the sun not only shines brightly over the Catskill Mountains, but also the stage at St. James Theatre.

Transferring from The Ustinov Studio at the Theatre Royal, Bath, The American Plan has now landed in 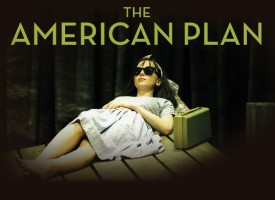 London. St. James Theatre and its 312 seats is a suitably sized auditorium where do not feel far from the stage, wherever your position is.

So what is The American Plan? Put simply it was the American version of Butlins. Popular in the 1960’s, New Yorkers would take a summer break from the city that never sleeps and head for the Catskill Mountains. Resorts sprung up everywhere and to provide value for money, there was round-the-clock consumption of food and non-strenuous activities, all included in the price.

Here the play is set on the bank behind a private jetty, overlooking Catskills resort. A lake separating the two places and its inhabitants. Well, it tries to. Resident in their holiday home is Eva, played by Diana Quick. Eva is shrewd and dominates all those who cross her path. Perhaps the result of escaping Jewish persecution in Nazi Germany to America, only to find similar prejudices in the land of the free. At that time America was still dominated by white anglo-saxon protestants, who occupied the higher echelons of US society. Perhaps this explains why Olivia, the African-American maid played by Dona Croll, is treated like family, rather than a servant.

Eva continues to have it tough. We soon learn her young daughter Lili, played by Emily Taaffe, is unhinged and on medication. She needs attention and Lili desperately wants the fairytale – a man to take her away from her mother and her life. Right on cue, Nick arrives. He is a writer, soon-to-be architect and on first glance, an ideal suitor. Things are not as they seem and here the story develops, with an added entanglement towards the end of the play with the arrival of Gill who is suave and slightly mysterious. Eva, the ever protective mother and skulker of bushes in the moonlight, soon has him sized up.

What truly makes this play is the cast. They are all fantastic and their passion for the play shines just as bright as the sun in a hot American summer. All the characters have something to hide, or are running away from their past. The play could easily slip into soap-opera because of this, but just stops short. Diana Quick is superb and is actually quite scary at some points in the play! She does a half decent German accent as well. Luke Allen-Gale also deserves a mention as the young confused American, with dreams beyond his reach. He really was the star of the show.

The staging is clever and simple. A wooden jetty with the belief of a cooling lake just beyond. A table and chairs positioned on the bank just behind, where afternoon tea is sipped. You can almost feel the heat coming from the stage, accompanied by a background noise of crickets and tweeting birds. It projects an image of an almost perfect American summer vacation. But as Richard Greenberg writes, happiness only exists for other people. Luckily for Richard though, he makes up for the anguish with near-perfect storytelling and an ensemble cast which must be the envy of other London productions currently showing.

Previous: Everyone Theatre: An Interview with David Jubb
Next: The Taming of the Shrew, Hampstead Theatre