everything theatre originally reviewed this production at the Trafalgar Studios. It is currently on a national tour until June 2013: http://www.yesprimeminister.co.uk/tour-dates/

Antony Jay and Jonathan Lynn
Directed by Jonathan Lynn
★★★
Pros: A very witty script and a batch of good performances.
Cons: Lacks that special something that allows you to really engage with it.
Our Verdict: It’s an enjoyable evening, but it left me with a slight feeling of anti-climax and disappointment. 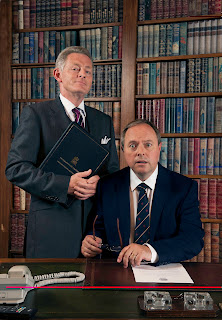 It’s a brave decision to revive a classic, especially when the classic in question is one of the greatest television satires ever to result from the license fee. Nonetheless, the writers of the original 1980s originals, Antony Jay and Jonathan Lynn, have teamed up again to modernise the story of The Rt Hon Jim Hacker MP and his now-legendary Cabinet Minister Sir Humphrey Appleby. Being a huge fan of the Yes Minister franchise myself, I was rather excited to see this new reincarnation, which is aptly being performed at the Trafalgar Studios just around the corner from the seat of political prowess that is Downing Street. However, whilst it has its moments, there is something missing from the production, and it’s very hard to put your finger on exactly what that something is.
The stage production has been brought forward to modern times with great success. Prime Minister Hacker is now heading a (presumably ConLib) coalition government, and items on his agenda include the global financial crisis, energy security, political instability in countries ending with ‘stan’ and global warming. One shouldn’t really compare it to the TV series; it is written for the stage and aimed at the modern day audience. Realistically though, of course we’re going to compare the two, and this is where the play falls down somewhat.
By no means is it all bad news, so let’s deal with the positives first. It remains wonderfully well-observed, brilliantly capturing the dilemmas faced by the politicians of today. Jay and Lynn have lost none of their trademark satirical wit, and in essence the script is excellent, full of subtext, hidden agendas and the driest of dry humour. In addition, there are some excellent performances. Robert Daws plays Jim Hacker with boundless energy, and unlike his TV counterpart this new Jim Hacker is louder and more prone to fits of panic. This creates a most welcome and entirely necessary element of physical comedy to complement the textual comedy provided by the script. To tell the truth, the whole cast are strong in their roles, but despite the fact that a first-rate script coupled with top-notch performances would usually be a recipe for success, there remains something missing, and this is where the bad news begins.
Understandably, the stage production has tried to create its own brand of comedy to dissuade people from drawing comparisons with the TV series. However, in doing so, it’s lost its heart. From the start I found it hard to suspend my disbelief and really connect with what was happening on stage. The brilliant satire which characterised the TV series has lost its edge, and it now feels altogether less punchy and less razor sharp. Part of the problem is undoubtedly the relationship between Sir Humphrey (played by Michael Simkins) and Jim Hacker. Sir Humphrey has lost that acute top-down intellectual snobbery which made him famous, and Jim Hacker seems to be far more in control of his manipulative Cabinet Secretary. The rest of the problem is harder to put your finger on, so I’ve stopped trying. It just feels like there is something missing, and that something prevented me from truly engaging with the play.
My concluding suggestion that you remove from your mind any preconceptions about what you are going to see. That was my mistake, and I’m sure the mistake of many others – the stage production is not a re-make of the television programme, it is a new script and a new style in its own right. If you can get that into your head then you’ll probably have a very enjoyable evening in the Trafalgar Studios, but if you can’t then I think you’ll find yourself yearning to get back to your television.
Please feel free to leave your thoughts and comments in the section below!
Yes Prime Minister ran at the Trafalgar Studios.
Box Office: 0844 871 7632 or book online at http://www.atgtickets.com/venues/trafalgar-studios/
Antony Jay Jonathan Lynn Michael Simkins Robert Daws Trafalgar Studios Yes Prime Minister 2012-07-08
+Everything Theatre