Everything Theatre’s James Hodgson argues that the success of One Man, Two Guvnors is a triumph for the National Theatre, the West End and the Arts. 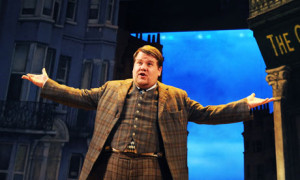 James Corden won widespread acclaim for his role in One Man, Two Guvnors

After a month of rumours, the National Theatre today confirmed that Nicholas Hytner’s hugely successful production of One Man, Two Guvnors will be transferring to the Adelphi from 8th November for a four month run. The news came just under a month after it was announced that Andrew Lloyd-Webber’s Love Never Dies, the West End’s first ever musical sequel, would be finishing its London run early after just 18 months.

From the outset, I want to make it clear that I have nothing whatsoever against Andrew Lloyd-Webber or his work. It is not to my taste, but I appreciate what he has done to popularise theatre around the world. I also feel that those who ran the campaign ‘Love Should Die’ are deeply misguided. As Mark Shenton said, their campaign was one of ‘intimidation, aggravation, lies and deceit’, which has no place in the theatre industry. Additionally, how sad do these ‘phans’ have to be to actively campaign against a musical?! It’s an innocuous piece of theatre, not a disastrous government decision!

Despite this however, I do believe that the early closure of Lloyd-Webber’s most recent musical is a good thing when it is considered alongside the rise of productions such as One Man, Two Guvnors and War Horse. The benefits of these recent events are wide-ranging, and are summarised as follows:

GOOD FOR THE NATIONAL
The National is riding the crest of a never-ending wave at the moment. It is still running at around 90% ticket sales across all its shows, and productions such as One Man, Two Guvnors, London Road and Frankenstein are continuing to keep box office income high. Additionally, the Broadway transfer of War Horse recently scooped an incredible five Tony Awards (Best Play, Best Director, Best Scenic Design, Best Sound and Best Lights) and the West End version is continuing to book over a year in advance (now until October 2012). The transfer of another National production into the commercial realm is yet another huge PR success for them, but more importantly it will act as another vital income stream. War Horse in the West End contributed £13 million of box office income to the National in 2009-10 which was around 20% of their annual turnover. The introduction of another show into the commercial realm will open another income stream, which is vital considering that this year they have had £1.4 million cut off their core Arts Council grant. The success of One Man, Two Guvnors will easily plug this gap, and possibly generate even more income for the ever more ambitious National Theatre.

GOOD FOR THE WEST END
The West End is (understandably) dominated by musicals backed by deep-pocketed investors. It is ruthlessly commercial. Plays tend only to be able to survive by getting big named cast members involved, and even then they only do short runs (usually around 3 months). So when a £6 million musical backed by the world’s most prominent theatre impresario is replaced with a pokey £500,000 comedy it is hard not to a smile. More importantly however, the introduction of a genuinely hilarious comedy into the West End is entirely necessary. At the moment, the commercial sector is in danger of becoming samey and lacking in true diversity. Musicals and serious dramas with serious actors are abundant, and comedies like The 39 Steps and The Mouse Trap are struggling. Of course Sonia Friedman’s immensely successful Much Ado About Nothing also helps to buck the trend, but despite its brilliance it is not anywhere near as funny as One Man, Two Guvnors. Perhaps this will cause complacent producers to take notice: we want more a more diverse West End!

GOOD THE FOR THE ARTS
Fundamentally, One Man, Two Guvnors is a great thing for the British Arts scene. It justifies continued investment in theatre, and if the rumours of a Broadway transfer materialise then it will continue to prove that some of Britain’s best exports come in theatre form. Will it enjoy the same level of financial success as War Horse? Probably not, not least because it is not clear who else could play the part of Francis Henshall other than James Corden! Nonetheless, it is a triumph, and a fantastic boost for subsidised theatre. It is yet another feather in the National’s cap (which now resembles a Native American Headdress), and it is tremendous for the British theatre scene.