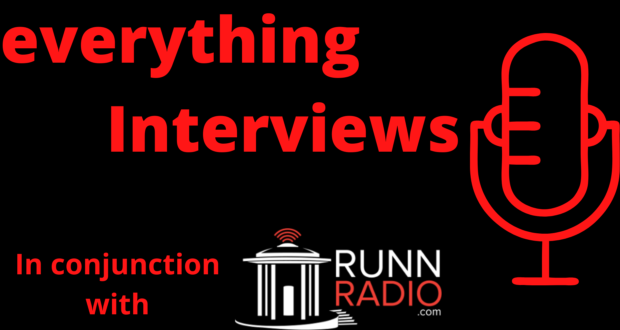 We’ve got loads of great interviews lined up for our radio show and podcast, so many in fact we’re not quite sure how we are going to fit them all in! So, we thought we should tell you what’s coming so you can help spread the news and support us, Runn Radio and all the amazing artists who have given up their time to chat with us.

Here’s the current list of future interviewees, and the date they will (provisionally) be broadcast on our Runn Radio show, with the podcast released usually within 24 hours. We’ve also included a link to bookings (if available at this time). We’ll update this as we confirm more guests for the next few months so do keep checking back regularly. We really do have lots more in the pipeline.

You can also catch up with all our previous interviews here.

Paul is bringing his show, Tell Me Straight, To Chiswick Plahouse soon. It’s a play about the up’s and down’s of relationships for a gay man, although as we discuss, much of it could be any type of relationship, gay or straight or otherwise. He also chats about the devleopment of the show since its original short run went at King’s Head Theatre.

Linus is someone we like to think of as a good friend of ET, so it was great to chat with him again about what he has been up to since we last spoke. And it turns out quite a lot, from taking his show on a short run around the country, to planning a new tour that will take him off on his travels for nearly three months.

We loved the press release for Steve & Tobias Vs Death. It’s a zombie horror that sees two brothers trying to patch up their relationship whilst the world outside their front door is fighting for its life. So we couldn’t resist the chance to chat to one of its writer, Sebastian, about the inspirations for the play, whether the front row of the audience should wear ponchos to protect them from blood splatter, and how autobiographical their recent show, I Lost My Virginity To Chopin’s Nocturne In B-Flat Minor was!

Sometimes we do interviews where we are well informed on the subject matter, and sometimes we do an interview where we really feel like we are going to learn something, plus hope we don’t make an absolute fool of ourselves by saying something utterly stupid! This was certainly one of the latter type; Pickle is a show about being a young Jewish woman and the conflicts in life between your family, faith and everything else life throws at you. It was fascinating to chat to Tanya and Deli and thankfully, we reckon we managed to avoid any foot in mouth!

Noga is another who we’ve spoken to before about her work, when her company, Harpy Productions, was bringing Bunker to The Camden Fringe. So long ago in fact it was before we started releasing the interviews as a podcast. She, and Harpy Productions, have been up to so much since then that we jumped at the opportunity to chat again. Not only are they bringing their new show, Lethe, to the Vault Festival soon, but they were also responsible for The Fright Before Christmas. There was certainly lots to talk about!

Tommy / The Queer Historian, How Disabled Are You?

A show about the demonisation of benefit claimants and the absolute carnage that is PIP assessments might should a rather dull subject, but we disagree. And we reckon Tommy, aka The Queer Historian, has a show that will show that you can tackle this topic in a way that will both inform and entertain. It’s an interview that really brought out the socialist in us as you will hear soon.

We first came across Charlotte when her play, Twenties, was online as part of TheSpaceUK’s online festival. We loved the show, so when we were asked to present at their (online) awards ceremony for the season, we gave Charlotte the Everything Theatre’s Make Do and Mend Award for Ingenuity in Lockdown Award. When we saw the show had beendeveloped into a full length play and was on its way to The Space Arts Centre (not to be confused with TheSpaceUK!) it felt like the perfect time to ask her how getting our award had changed her life. We were actually surprised when she said it really had, and just why!

Kim not only talks to us about Somewhere To Belong, which takes the form of an absurd gameshow as a way to highlight some of the perceptions people may have of the bi and wueer community, but she also makes for a fascinating discussion on the wider world’s perception of sexuality. It’s another interview that we feel like we learnt plenty from, as well as being entertained along the way.

Rosa and Maya are sisters who have also set up their own production company, which is bringing Experiment Human to The Vault Festival soon. We’re recording this one soon so we’ll see how in synch sisters can be when we delve deeper into the show.

Some shows do jump out at you when you read the press release, and this is certainly one of those. Taking us from 1486 Germany and a monk who wrote a guide to witch hunting, into modern day INCEL, there is certainly a lot to cover when we talk to Sidsel about the show.