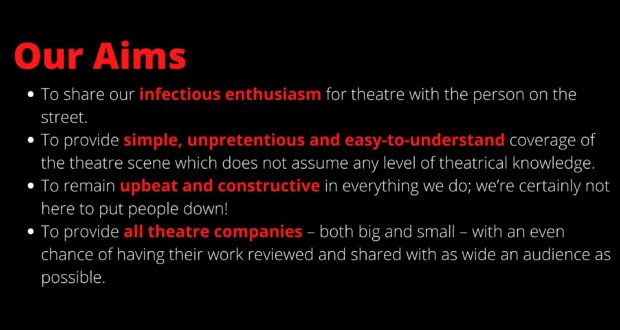 Everything Theatre is a real group effort, how else could we review so many shows? Each and every person who writes for us is an important cog in the big wheel that keeps us running. Over the years we’ve had more than 100 people write for us at various times, and we hope to see that number continue to increase in the future. Some of our team have been with us since the very early days, others stay for a short while, but we appreciate each and every one of them for their contributions.

We’re working on lists of our current and past reviewers, as we want to ensure they all get the recognition they deserve for their efforts. Check back soon and hopefully we’ll have it completed.

Rob joined the reviewing team in 2016. When the founders stepped down the year after, he offered to help out a little. That ‘little’ has grown quite a lot. Nowadays Rob is the one you’re most likely to hear from if you contact us about anything.

Sidonie has been helping out since 2018. She is our go-to person for all things social media, and has been a big reason why you will see us so much more active on Twitter, Facebook and, more recently, Instagram. She is also the go-to person if you want to know about West End musicals.

Mary joined the team at the end of 2019 to help out with editing. Since then she has become a valuable support in keeping things on track. Her sensible approach ensures we don’t go too wild with some ideas.

Mary is also our resident expert on anything puppetry – what she doesnt know about Zippy, (including the dark days he doesn’t like to mention) isnt worth knowing.

Clare took over the reins in 2016 and has helped keep things afloat since. Whilst not quite so hands on at the moment due to two teenage daughters taking up most of her spare time, she is still the person whose calm and sensible head acts as a great mentor when needed.

We don’t rank our reviewers, but when you’ve been with us for as long as some have, they deserve to be called senior. We reckon anyone who has managed 50 plus reviews deserves to be called senior in fact, so when they reach that magic number, they go into our hall of fame here.

As you may notice some of these photos are from when they started with us. We do keep asking for updated ones; maybe one day!