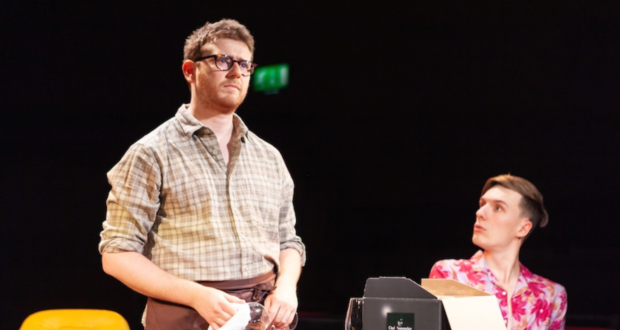 The bar of Southwark Playhouse is buzzing when I arrive on a muggy Friday evening; full of people sipping wine and waiting for the house to open. Next time, I’ll arrive hungry so I can sample their delicious looking pizza. It’s a welcoming spot, where you don’t mind sitting on your own and people watching for a while.Tasting Notes is similarly set in a wine bar, LJ’s, and delivers all the delightful awkwardness of a bunch of strangers who have become a family, working closely together over long shifts. There is the mutually unrequited love between colleagues; a self-absorbed&hellip;

A unique new musical filled with moments of tenderness, humour and surprise.

The bar of Southwark Playhouse is buzzing when I arrive on a muggy Friday evening; full of people sipping wine and waiting for the house to open. Next time, I’ll arrive hungry so I can sample their delicious looking pizza. It’s a welcoming spot, where you don’t mind sitting on your own and people watching for a while.

Tasting Notes is similarly set in a wine bar, LJ’s, and delivers all the delightful awkwardness of a bunch of strangers who have become a family, working closely together over long shifts. There is the mutually unrequited love between colleagues; a self-absorbed young man who misses shifts and barely apologises; the regular, who they seem to love and despise in equal measure; the chef from Hungary trying her best to fit in; and the owner, working herself to the bone to keep her dream alive. This new musical shares snippets of their story over 24 hours in a Groundhog Day-style narrative that delights, engages and shocks.

Like Bill Murray waking to hear ‘I’ve Got You Babe’ on the radio, the time rewind is musically indicated in this show. It’s a clever device and mostly easy to follow. Some of the funniest parts of the musical come from the varying interpretations of the same moments in the day by different characters. The young man, seemingly oblivious at first, just hears “blah blah blah” coming from his colleagues’ mouths. And the love-struck co-workers’ conversations differ widely when seeing the same scene from both perspectives. It’s a delightful showcase of how self-absorbed we can all be.

But it’s not all giggles and romance: there’s also a shockingly dark moment in the second half, which felt jarring and out of character for the production. While not exactly frothy beforehand, it does manage to retain a balance up until this point. This is a show that falls into the trap of a significantly stronger first half, and despite a hilarious song about how great cats are, the second act feels disjointed.

Whilst only having a short time in the spotlight, each role is fully formed. Nancy Zamit shines on stage. She plays LJ and is the first character to have her moment. She’s instantly likeable and it’s easy to warm to her. She’s also got a stunning voice, with a real emotional punch. Sam Kipling’s comedic timing as George is another highlight, and he beautifully balances moments of pure farce with tender depth when required. Wendy Morgan plays Eszter, a Hungarian chef with limited English, and whilst I’m not in a position to comment on her accent, moments of conversations in which she struggles to understand her colleagues are cleverly done.

Musically, this is a wonderful show, and although I wasn’t singing the songs all the way home like I have been known to do, the score was effective at showcasing each character’s moment in the spotlight. In the programme notes, the composer, Richard Baker, talks about how each character has their own unique identifying interval – the distance between two notes. And whilst I didn’t recognise this at the time (apologies to my music theory teachers), it’s an interesting way to give characters a distinct identity, and is particularly noticeable in the finale.

Tasting Notes is an interesting new musical, filled with warmth and love alongside moments of absolute hilarity. Despite the slightly weaker second half, it’s a brilliant show that really delves into the very core of what it means to be human.

Tasting Notes plays at Southwark Playhouse until 27 August. Further information and bookings can be found here.