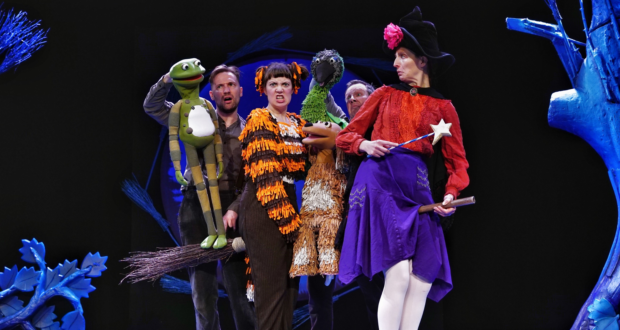 Tall Stories bring enormous energy and colour to the Lyric Theatre with this lively and enjoyable stage production. It’s a polished piece of work for ages 3+, and there's loads to like about the show: full of fun, silliness and laughter, it’s not too scary for tinies, but still excitingly surprising in places. The music and original songs are splendidly catchy, really playing the crowd, getting the audience singing and clapping along. There’s a strong, likeable cast: the characters are all well-rounded and beautifully enacted. The lighting is delightful, and there are some imaginative slow motion effects. It really&hellip;

A delightful, magical musical that’s great fun as it is, but perhaps not quite what it says on the tin.

Tall Stories bring enormous energy and colour to the Lyric Theatre with this lively and enjoyable stage production. It’s a polished piece of work for ages 3+, and there’s loads to like about the show: full of fun, silliness and laughter, it’s not too scary for tinies, but still excitingly surprising in places. The music and original songs are splendidly catchy, really playing the crowd, getting the audience singing and clapping along. There’s a strong, likeable cast: the characters are all well-rounded and beautifully enacted. The lighting is delightful, and there are some imaginative slow motion effects. It really is a good, fun day out for the kids. But if you’re expecting to see a page to stage version of Julia Donaldson and Axel Scheffler’s Room on the Broom – the best-selling book, known for its punchy format and distinctive aesthetic – this adaptation might not be quite the one.

An audience wanting to see a children’s classic on the stage probably comes with certain expectations. If they go to see the Moomins they might anticipate seeing identifiable white hippo-esque creatures on the stage. If they go to Peppa Pig they would want to recognise her and the family as they appear on the telly, or in books. It’s surprising therefore that this adaptation of Room on the Broom doesn’t adopt the distinctive visual aesthetic of the source material to any great extent. There’s a nice set design which is not dissimilar, and the witch’s costume hints at it, but that’s really as close as it gets. Clearly, having some of the illustrated characters played by humans is going to cause difficulties, but there are several puppets in the show which are made quite visually different from the book. It just feels an odd creative choice. It puts a distance between the expectation being sold and what is actually delivered.

A further change is that here the story is framed within a tale of hikers planning to camp out under the moon. They are taken aback when they see a witch soaring down towards them, and then the narrative switches, with the cast no longer campers; instead they are relating the tale from the book. The hikers reappear at the end of the show to round it off, and some of their equipment is linked in as props throughout, but really this device feels rather unnecessary. I couldn’t help wonder if a big bang musical number, which Tall Stories do so well, would have fired the show up rather more effectively and quickly, perhaps followed with a simple shadow puppet exit of the broom flying across the moon to close the play nicely.

This is a sixty-minute show made from a five minute book, so there is a need for extra material alongside the original text to pad it out. Much of that really brings value to the performance. The music and songs, for example, are excellent, helping describe the characters and situations more fully and bringing joy to the stage. The whole audience is invited to participate, sing and clap along, which they do with delight. Most of the script, however, is original dialogue, against which the distinctive, beautiful poetry of the book when it is introduced seems somewhat grafted – a different tone, and misfitting, which is a shame.

Ultimately the show captures the book’s warm spirit of camaraderie, and promotes the same valuable message of helping each other. It is certainly a fun way to spend an hour with the kids over the holidays: just expect the unexpected and you’ll enjoy a lovely production.

Based on an original book by: Julia Donaldson
Directed by: Olivia Jacobs
Design by: Morgan Large
Lighting by: James Whiteside
Music Composed and Sound Design by: Jon Fiber and Andy Shaw
Puppet Design by: Yvonne Stone

Room On The Broom plays at Lyric Theatre until 4 September, and then embarks on a nationwide tour. Bookings and all tour dates can be found here.