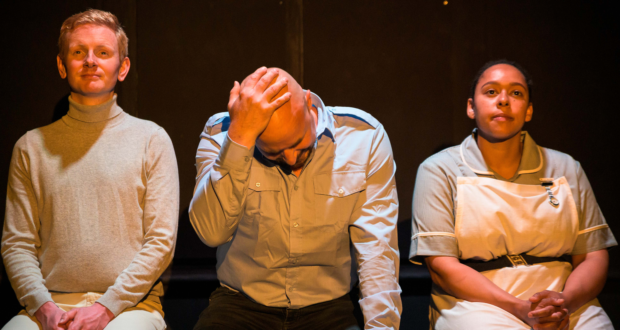 The Hope Theatre sits above the Hope and Anchor pub, just a few minutes from Highbury &amp; Islington station. It’s a wonderfully welcoming spot. From the friendly staff at the bar to the delicious bacon and maple syrup flavoured chips, it’s the perfect place to while away a few hours before a show. Top it off with an unexpected heavy downpour resulting in a spectacular rainbow over Islington’s Upper Street out of the window, and I could already sense that this evening was going to be something special. Moment of Grace sounds intense; just reading the synopsis has an&hellip;

This is an emotional, striking, and powerful play with a remarkably talented cast. It deserves a bigger stage to share its story.

The Hope Theatre sits above the Hope and Anchor pub, just a few minutes from Highbury & Islington station. It’s a wonderfully welcoming spot. From the friendly staff at the bar to the delicious bacon and maple syrup flavoured chips, it’s the perfect place to while away a few hours before a show. Top it off with an unexpected heavy downpour resulting in a spectacular rainbow over Islington’s Upper Street out of the window, and I could already sense that this evening was going to be something special.

Moment of Grace sounds intense; just reading the synopsis has an impact. As my Mum said before the show, everyone remembers seeing Diana walk into that HIV/AIDS unit and shaking hands with the patient. It’s an iconic moment that even those of us born a few years later feel like they remember. But to capture this event on stage seems like a daunting task. Do you really want to try and imitate the People’s Princess? How do you capture such a momentous moment in a small pub theatre? Well Bren Gosling’s play makes it look easy, it’s a true masterpiece, perfectly telling the story of this day through three characters: a nurse on the unit, a patient, and a fire-fighter – estranged from his gay son.

The play is beautifully written, with three characters who never directly address each other, yet a narrative which seamlessly moves between them. All the characters speak directly to the audience, reflecting on their story, as though one of Alan Bennett’s Talking Heads.

We first meet a nurse, Jude, played by Narisha Lawson, as she waits for her bus after a shift on the HIV/AIDS unit. Her compassion and strength is striking from the outset, and some of her descriptions of the patients and the attitudes towards them is truly heart-breaking. Lawson delivers her role with such warmth; it makes you want to leap out of your seat and hug her.

One of her patients is Andrew, played by James Taylor-Thomas, who gives an understated yet powerful performance. Although his narrative is tragic, there are some wonderful moments of light relief when he talks about what Diana is wearing and what he will say to her.

Completing this remarkable line up is Richard Costello, who somehow manages to inject warmth and generate compassion for Donnie who, on paper, we should all hate. He’s bigoted and narrowminded, yet his closing lines will leave you gasping through your tears.

There’s very little set or lighting in use, yet on reflection the lighting programmed by Laurel Marks is ingenious. Subtle changes such as the flash of the press cameras on Diana moving from the side of Jude to in-front of her as she explains the moment they met. Or the subtle flicker of the TV as all three characters gather around their respective sets, watching the story unfold on the 6pm news and registering the implications this moment has.

I wasn’t sure this play was how I wanted my Pride celebrations to begin, but as Backstory Ensemble Productions have produced it in association with the National HIV Story Trust, a registered charity which ensures the true history of the HIV/AIDS Pandemic of the 80s and 90s is not forgotten, it seems fitting to remember all those who suffered and died from the illness, as well as remembering the need for compassion, not ignorance.

With Gosling’s remarkable script and the spectacular cast, this story feels in safe hands, and I feel privileged to have been witness to it tonight before I don my rainbows for Saturday’s march.

Moment of Grace plays at The Hope Theatre until 16 July 2022. Further information and bookings can be found here.

Previous: Review: The Woman In Black, Fortune Theatre
Next: Review: Beauty and the Beast, London Palladium