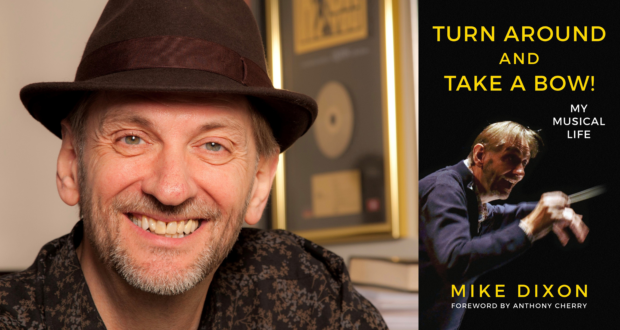 Book Review: Turn Around and Take a Bow! My Musical Life

Book Review: Turn Around and Take a Bow! My Musical Life

Written by Mike Dixon In another life I’d be a professional musician; in fact it very nearly happened. 10 years ago, I was eagerly, and sometimes naively, going to studio recordings at Abbey Road and Maida Vale, and playing in the pit for a range of amateur musicals with my sights set on a musical life. Whilst my career took a different direction, I will never forget those early experiences. So, I was intrigued to get stuck into this autobiography of Mike Dixon, who has remained faithful to the music industry for over 40 years and had many fascinating&hellip;

A fascinating insight into the inner workings of a musician at the top of their game, with a remarkable career that generates gripping stories.

In another life I’d be a professional musician; in fact it very nearly happened. 10 years ago, I was eagerly, and sometimes naively, going to studio recordings at Abbey Road and Maida Vale, and playing in the pit for a range of amateur musicals with my sights set on a musical life. Whilst my career took a different direction, I will never forget those early experiences. So, I was intrigued to get stuck into this autobiography of Mike Dixon, who has remained faithful to the music industry for over 40 years and had many fascinating experiences along the way.

What first struck me was the number of similarities between Mike and I in our early days, and the sanctuary that music provided to us both. As the girl who scheduled her piano lessons to clash with PE, I was amused to read that “rehearsals generally meant that dreaded PE/Games could be avoided” and struck by how the music room was also a “place of refuge” for Mike.  His lasting musical friendships and experiences from his days at Trinity College of Music ring true with the fond memories I have of Saturdays at Junior Trinity – “Being at Trinity gave me such a rich and varied experience both in my musical and social life”. But this is where our similarities end: whilst I got swept up in a new career that’s led me to happily write about plants all day (and theatre at night) Mike went on to have a truly remarkable career that many musicians can only dream of.

This book is heaving with incredible anecdotes and stories from Mike’s career. He’s been involved in multiple West End shows, plus a huge range of TV and radio projects, and he crams in as many stories as possible with warmth, humour and humanity. You really get a sense for who he is, as well as learning a great deal about the inner workings of the industry. It’s particularly fascinating to hear about how a West End show develops, with Mike often stepping in to compose additional music or suggest changes to the score. He’s honest about the issues he’s encountered, giving irresistible nuggets of gossip, whilst remaining professional in his analysis of situations.

Mike has been involved with many incredible projects outside of the glitz of the West End, and although there are some slightly frantic chapters towards the end, he generally does a good job of not falling into the trap of just listing his various achievements. Each gig he describes is given enough context to be genuinely interesting to read about, whether that be Eurovision or the Royal Variety Show. A highlight is his experience with Dame Shirley Bassey on the Pyramid Stage at Glastonbury; despite all his remarkable achievements beforehand it was lovely to read about how much it meant to them, with a very experienced horn play “beaming from ear to ear” and Mike himself saying “it was truly epic”.

Nearing the end of the book, Mike reveals more personal details, and a particularly tough time is detailed through sharing emails he was sending family and friends; a clever way to tackle what must be hard to reflect on.

This is a fascinating book, whether you have experience in the industry or just want to know what really goes on behind the scenes. Mike comes across as a warm, funny, and charismatic musician, and his career is a testament to how much he is respected by all who meet him. Had my career taken a different route, it would have been an honour to work with Mike.

Turn Around and Take A Bow is available now from all good book sellers.

Previous: Review: Symbiont, The Vaults
Next: Review: On Me, The Questors Theatre