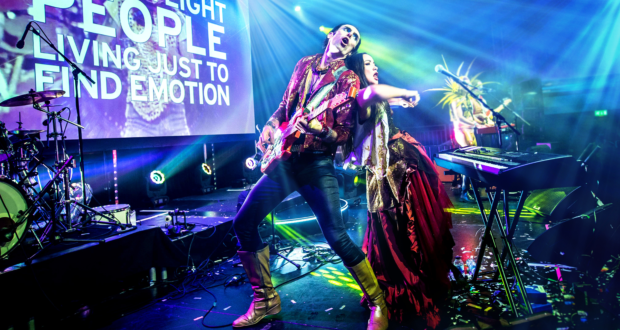 It’s Saturday night in Clapham Junction and the streets are filled with smartly-dressed people returning from the races at Ascot, staggering out of the station in search of fried food with their fascinators askew. There’s also the usual crowd, pre-drinking before a night at Infernos or finishing up an indulgent afternoon on Northcote Road. And then there’s the wonderful crowd I found myself part of at the Clapham Grand – brought together by a love of musicals, and of singing along to show tunes. The concept of a Massaoke: Sing the Musicals event is simple: pile a group of&hellip;

An absolute treat for any musical theatre fan. It’s a spectacular celebration of show tunes, and a safe space to channel your inner Elphaba, Fantine or even Baloo.

It’s Saturday night in Clapham Junction and the streets are filled with smartly-dressed people returning from the races at Ascot, staggering out of the station in search of fried food with their fascinators askew. There’s also the usual crowd, pre-drinking before a night at Infernos or finishing up an indulgent afternoon on Northcote Road. And then there’s the wonderful crowd I found myself part of at the Clapham Grand – brought together by a love of musicals, and of singing along to show tunes.

The concept of a Massaoke: Sing the Musicals event is simple: pile a group of theatre-loving, probably slightly tipsy, people in a room, then get a spectacularly-dressed live band on stage and spend two hours singing your heart out. It’s brilliant fun. I had some reservations; would it just be full of hen dos who weren’t really bothered? And although there was some of that going on, and occasional people who really hit the G&Ts a bit too hard, there was also an incredible atmosphere, with a warm and friendly vibe throughout the theatre. The cheers that went up when we all realised we were about to sing ‘Do You Hear the People Sing’ from Les Mis or to belt out ‘Consider Yourself’ from Oliver was a clear sign this is a serious musical-loving crowd: we’re not just here for pop hits that happen to be in jukebox musicals.

The band were fantastic, dressed in over-the-top Hugh Jackman-esque showman outfits, or bedraggled corsets you’d expect to see on Fantine. Their showmanship really carried the night and lifted it to be so much more than just karaoke. Kirsty Newton’s vocals were particularly spectacular. The whole band were brilliant at encouraging everyone and helping us along when we got a bit lost (turns out no-one knows every verse, even with the words on screen).

The one criticism of the night would be that some of the songs were altered or cut, presumably to try and cover as much as possible and not lose the crowd. This was a little frustrating. Although it could have been dire, it would have been fun to let ‘The Phantom of the Opera’ run into the section when the Phantom demands Christine sing to him – as we all wail higher and higher. Ok, perhaps that wouldn’t have been so good. But then in ‘Defying Gravity’ from Wicked they cut out some of the best sections as the song builds to its climax, which was a little disappointing.

Perhaps there are performance rights issues around newer shows but more than a short chorus of ‘My Shot’ from Hamilton would have gone down very well, and inclusion of some other more recent shows like Come from Away or Six would have also been welcome. We could have done a great version of ‘Welcome to the Rock’.

You can’t please everyone at a show like this, and it does cover songs from a huge range of genres and time periods; from The Wizard of Oz through to The Greatest Showman. Towards the end of the show, as my Mum and I performed a surprisingly emotional version of ‘I Will Always Love You’, I realised what a special night this is. The passion and enthusiasm of the audience was infectious, and it was impossible to leave without a huge grin on your face (and a sore throat the next morning).

Massaoke: Sing The Musicals played for one night only at Clapham Grand. Check the company’s website here for future dates and other shows.

Previous: Review: That Is Not Who I Am, Royal Court
Next: Review: Her Hem, Etcetera Theatre