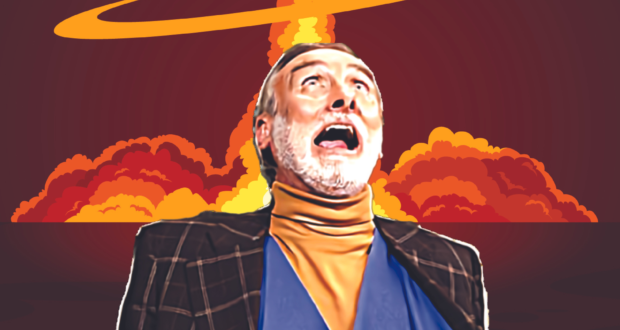 Author: Everything Theatre in Features and Interviews 26 June 2022 0 502 Views

John Hewer tells us about The Bed Sitting Room

On Sunday 3 July, Hambledon Productions, my theatre company, is holding a Spike Milligan Gala Night. A brilliant cast, fantastic guest speaker Jane Milligan, a pop-up Milligan Exhibition, plus more. The headline event of the evening will be a rehearsed reading of an updated version of John Antrobus and Spike Milligan’s post-apocalyptic dark comedy The Bed Sitting Room. But what exactly is The Bed Sitting Room? And why is it overdue a fresh appraisal?

2017, and I was looking for a new, big project for 2018 when a friend flagged up that it would be the centenary of the Mighty Milligan… Bingo! The Bed Sitting Room! Rather than trot out episodes of The Goon Show, it was Spike’s irreverent playscript that most tantalised me…

The Bed Sitting Room seemed just too good to be true. In the early days of the internet (in our house, at any rate, about 2000) an IMDB search threw up this title. Directed by Richard Lester, it was the cast list that made my eyes stand out on stalks! Michael Hordern, Sir Ralph Richardson, Harry Secombe, Marty Feldman, Cook and Moore, Jimmy Edwards, Rita Tushingham… the list just went on. It was practically mythical. No TV broadcast since the 1980s, no VHS release… it seemed fated to remain ‘legendary’ without even being witnessed.

Then I discovered eBay!

The film instantly became a perennial favourite of mine. It’s a 60’s smorgasbord, not so much psychedelic, but bleak, garish, topsy-turvy and visually stunning. Yet incredibly, growing up through this nightmarish landscape, cutting through the grim and the absurd, were jokes. Good jokes. Bad jokes. So bad, they’re good jokes. Some jokes which haven’t aged well, true, but also some jokes which are still yet to come of age.

The playscript and the film adaptation are very similar (John Antrobus, who co-wrote the play and adapted the screenplay, did a remarkable job at translating it to a different medium). However, by the sheer nature of live theatre, it is more stark (more Graham Stark!) while also being more ribald and surreal. The playscript, published to tie-in with the film in 1969, tries its best to ‘keep up’ with Milligan’s frequent liberal attitude towards the original script. However, Antrobus, the brainchild, had the ability to harness Spike’s creativity, while also maintaining his own distinctive style. Putting it simply, when working on The Bed Sitting Room, they were interchangeable and worked as one. Imagine my delight, then, to discover, that not only was Mr. Antrobus happy, and keen, to discuss a revival, but also he wanted to work on a fresh revision of his text alongside me.

Spike’s rare but always tantalising dalliances with theatre are legendary; likewise, Antrobus’ theatre work is astounding. Arguably, however, their crowning achievement, for stage at least, is the co-creation of The Bedsitting Room. It’s a timeless text. The overall message I take from it is that, if civilisation as we know it were to end, we’d probably begin, in earnest, to restore it to what we already had; without seriously questioning what we were going back to. And there are elements of that as we continue to emerge from the pandemic, and there are certainly tensions revolving around that with the outbreak of war in Europe. And on this blank canvas of a new, theatrical world, Antrobus’ and Milligan’s writing, their surreal characters and their anti-establishment messages flourish.

This was an amazing time. John, an extremely gracious, and also extremely busy chap, and I spent three months working on The Bed Sitting Room for a 21st century audience (the play had not been performed on stage since the 1980s). John’s enthusiasm matched mine, and Jane Milligan, who took time out from her own busy schedule appearing in the West End in a production of the musical Kinky Boots, put me in touch with Norma Farnes, Spike’s former secretary and now custodian, manager and promoter for Spike Milligan Productions for nearly forty years. Norma was now settled in Spike’s former office at No. 9 Orme Court (known colloquially as The Fun Factory); a roomy, ornate, bay-windowed Georgian terrace. Accolades and personal keepsakes were everywhere. I struggled to focus on our meeting, I was so in awe of my surroundings and the ongoing situation. It felt as otherworldly as Spike’s own Goon Shows.

Norma ultimately had to decline the project; she was already co-producing another centenary tour; a bold and excellently executed recreation of The Goon Show as a live radio recording, co-produced by Spike Milligan Productions and Apollo Theatre Company (who, incidentally, we’ve teamed up with to co-produce a UK tour of Steptoe and Son Radio Show. Shameless plug!) This meant that, not only could she not afford the time to ensure that the show would be a fair recreation of Spike’s seminal work, but she was also concerned that there would be a conflict of interest when it came to tour booking. Like so many projects, the idea was postponed until parties were free… Never an easy task. For Norma, it sadly proved to be an impossible task; she passed away at the age of 82 in 2019.

As we began to emerge from the pandemic, in early 2022, 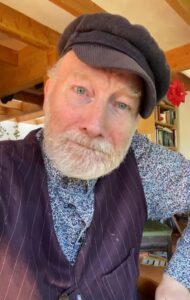 with the fifteenth anniversary of Hambledon Productions looming ahead, my thoughts were ‘go for gold’; ‘nothing ventured, nothing gained.’ And so I approached Jane Milligan, now a director of Spike Milligan Productions, and John Antrobus. They were both happy for us to revisit the possibility of staging The Bed Sitting Room. Result! Coincidentally, 2022 marks sixty years since the play premiered, and also twenty years since Spike’s passing.

The evening will star Jeremy Stockwell giving his quite dazzling interpretation of Milligan. I first saw him become Spike in his stage show A Sockful of Custard at the Edinburgh Fringe with Chris Larner, and, together with all the critics, I was amazed by his mimicry and sheer Milligan energy. Jane Milligan, having performed recently in the West End in Magic Goes Wrong, will also be joining us, in a live Q&A session as we salute the Might Milligan.

Spike Milligan Gala Night will take place at Riverhead Theatre in Louth on Sunday 3 July. Further information and tickets can be found here.