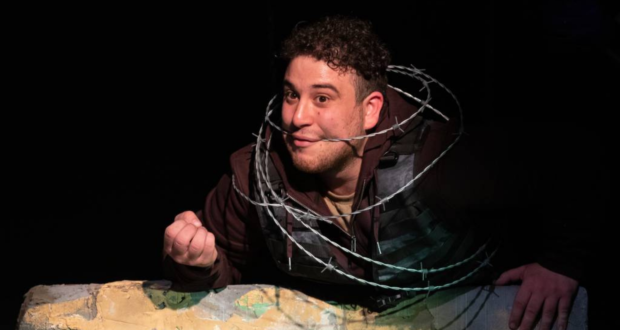 In an entertaining if muddled evening, this play tackles challenging subject matter using dark humour and inventive storytelling. But it fails to rise to the challenge of reaching a meaningful conclusion.

As Hala Omran playing Reem, our narrator-cum-compère, assures us “It’s ok, you’re allowed to laugh”. The play is studded with amusing punchlines and outrageous, hilarious scenarios, which keep the audience chuckling and onside with Reem and her languorous husband Sayeed (portrayed soulfully by Miltos Yerolemou). This darker-than-black humour allows the play to access and explore the torrid existential nightmare of surviving in Palestine in 2043 – another wise-crack on the never-ending nature of this conflict.

Reem invites us to play a contorted version of ‘Simon Says’ but this time it’s ‘Bibi Says’, a sly dig at Benjamin Netanyahu (who, we are told, has died, become a corpse and been reincarnated to make it to 2043). One family member tries to climb the barbed wire fence separating Israel and Palestine but gets stuck: sardonically, he survives two years ‘on the fence’, each relative unwilling to transgress the border to help him down. He does, however, become a major tourist attraction. The rye humour of the piece is one of its major strengths.

Strong also is the sheer smorgasbord of storytelling devices energetically pumped out by the ensemble cast, occupying a shambling bomb-shelter of a stage. There are times when this achieves real theatrical heights. As Reem tries to tell the story of how a young Israeli conscript was murdered by her son, the soldier’s spirit interrupts. Through clever use of on-stage microphones we really feel the victim attempt to wrest back control of the narrative of her death. The play toys well with this idea of who should be telling the story, forcing us to question who is on the right side of this conflict. As Reem says, her story is only true “because I’m telling it”. Later Adam (Philipp Mogilnitskiy), an Israeli will give an almost carbon copy speech of Reem’s, lamenting the loss of a child. two Palestinians certainly highlights the futility of the constant anguish and violence.

Whilst the piece has a strong voice, it is guilty of not really working out what to say with it. A strong first half leads into a long slog to reach the 2 hour 50 minute run time. The episodic structure of the play tries to cover too much, the narrative flits between different characters, and as we draw near the climax it’s still not clear what the central message is. In an attempt to draw these threads together, Ibrahim sends Reem a letter – from the playwright – in which he tells her she is not real, that he doesn’t know how to tell her story, or the story of Palestinians. It’s incredibly underwhelming. Instead of being a clever conceit, it feels more like the writer has dumped their insecurities into the conclusion of the play in lieu of an ending. If you don’t know how to tell your story, it feels incredibly disingenuous to tell your audience this after almost three hours.

Despite this rather deflating finish, I reflect on an entertaining evening that tackled difficult subject matter with deft humour and inventive staging. I just wish this play had more gut-punching depth to complement the punchlines.

Previous: Review: Patricia Gets Ready (for a date with the man that used to hit her), Brixton House
Next: Podcast: Dictating To The Estate

Matt's love for theatre started with with his first role as a Harley Davidson-riding granny at the age of 9. Since then he has played the beating heart of a Jabberwocky at the Edinburgh fringe, directed a Rhinoceros (puppet) in a West-end venue, and bloodied several audience members (with a production of Titus Andronicus). Away from theatre he is training to be a patent attorney and to mix an excellent French martini.