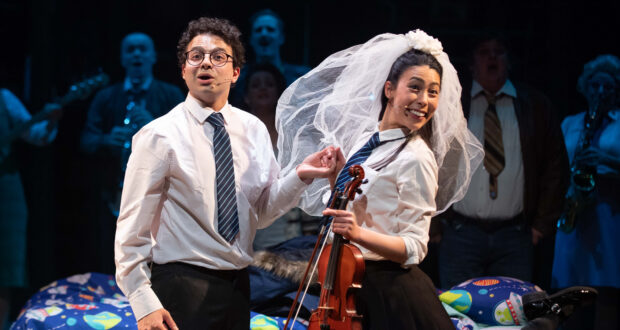 It was in the second half when placenta flew into the air during the school nativity, which might have been before or after the red sock protest, that I wondered if I'd fallen into someone's hallucination of their 80's schooldays. Queen's Theatre Hornchurch is currently home to The Secret Diary of Adrian Mole aged 13 3/4 The Musical. Based on the first book book in the wildly popular series by Sue Townsend and originally published in 1982, the books centre around a teenage boy called Adrian growing up in 80's Leicester, with all the trials and tribulations therein. I&hellip;

A production with strong performances and some laughs, but painfully dated.

It was in the second half when placenta flew into the air during the school nativity, which might have been before or after the red sock protest, that I wondered if I’d fallen into someone’s hallucination of their 80’s schooldays.

Queen’s Theatre Hornchurch is currently home to The Secret Diary of Adrian Mole aged 13 3/4 The Musical. Based on the first book book in the wildly popular series by Sue Townsend and originally published in 1982, the books centre around a teenage boy called Adrian growing up in 80’s Leicester, with all the trials and tribulations therein. I never read these books as a kid. I’d heard of them, like a lot of people who grew up in this country, so I was curious to check out the show and finally have some insight into this cultural phenomenon.

The production takes us through a year in the life of Adrian (James Hameed) with events featuring, but not limited to, falling in love with the new girl at school Pandora (Sally Cheng), being hospitalised with tonsillitis, organising a protest, learning of his mother’s affair and observing his parents’ separation and reunion.

I go into every show wanting to love it. I emerged from this one a bit bemused.

Firstly, no shade on the production, cast or creatives: all aspects of Adrian Mole are the usual high standard seen at Queen’s – a beloved theatre whose praises I can’t sing highly enough – and the acting is on par as always. The set looks wonderful, the sound is good, the musical numbers are performed with gusto and both serve the story and paint character well.

And yet, my one moment of identification with any character came when Adrian’s cantankerous schoolmaster (Dominic Gee-Birch doing his best John Cleese), so horrified at Adrian’s interpretation of the birth of Jesus, throws his hands up in the air and declares if anyone needs him, “I’ll be in the back row shooting myself!” For me, quite simply, the tone of the play is off, and the content dated. Neither production design nor strength of performances are enough to counter that.

While the story style is necessarily episodic – built from diary entries – and there are threads that run the length of the narrative, I felt the structure falls in on itself in the second half as it becomes a cyclorama of frenetic, unconnected events, with nothing to add to the story other than the expectation the audience find amusement in them.

Doubtless, it’s all intended to be taken with a wink and an elbow nudge, but even donning my rose-tinted lenses, when Adrian fantasises about having a marriage like Charles and Di’s, or Pandora’s nickname is revealed as ‘Box,’ (look it up on Urban Dictionary if you don’t already know the slang), or when Adrian’s Mum (Sioned Saunders) is slut-shamed over her clothing choices, you can tell me it’s intended to be watched ironically . . . but does that make it good entertainment in the year 2022?

Enid Blyton’s books still fill bookshop shelves, but not with their original text. A wink and an elbow nudge isn’t always enough. A lot of beloved kids books have gone under the knife in order that they might remain on shelves to be discovered by new generations. Even the 2002 film of Spiderman, when recently televised, had a joke cut from it that’s now considered offensively homophobic, and that was made a mere 20 years ago.

Adrian Mole’s diaries are 40 years old, and in my opinion, should have undergone some keyhole surgery before being staged. The handling of certain content is dated, and the stories aren’t fresh enough to be performed in their original glory. I mean, come on, have you ever met a 13-year-old called Nigel? (Wink, elbow nudge).

Throughout the evening I was painfully aware that I was laughing in the wrong places and for the wrong reasons, but as someone born at the tail end of the 80’s I perhaps fall perfectly into neither of the age brackets able to appreciate the show, because most people around me did seem to be having a good time: those old enough to have been Adrian’s age in the early 80’s, and those young enough for whom the decade is a dusty relic from a century of which they were not a part.

The Adrian Mole books are not on my childhood love list. Perhaps that’s why this show did nothing for me. Maybe you just had to be there.

Running at Queens Theatre Hornchurch until May 21 2022.
Booking Link: https://www.queens-theatre.co.uk/whats-on/show/the-secret-diary-of-adrian-mole

Previous: Interview: Giggles and Sex, What More Is There?
Next: Review: American Idiot, Bridewell Theatre