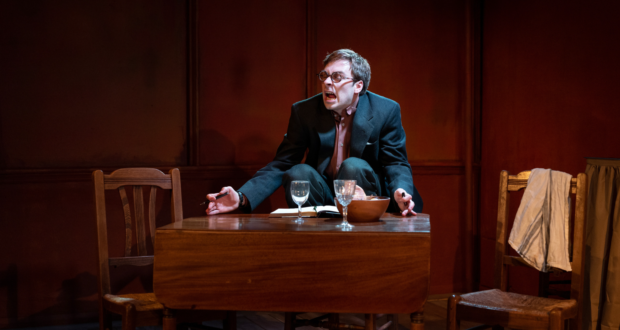 Harold Pinter's The Dwarfs is a semi-autobiographical piece that began life as a novel – his only one – in the early 1950s, before he began playwriting. It was later reinvented as a radio play, and finally became a stage production; initially in a cut-back form by Pinter himself, but later in a 2002 adaptation by Kerry Lee Crabbe. This current revival at the White Bear Theatre echoes that sense of transformation, re-writing and passage, in its form and narrative. The story follows three young men who are old friends, going about their everyday lives in post-war East London.&hellip;

A meticulously performed portrayal of male friendship, betrayal and vulnerability. Entertaining, but ultimately, a little shiny.

Harold Pinter‘s The Dwarfs is a semi-autobiographical piece that began life as a novel – his only one – in the early 1950s, before he began playwriting. It was later reinvented as a radio play, and finally became a stage production; initially in a cut-back form by Pinter himself, but later in a 2002 adaptation by Kerry Lee Crabbe. This current revival at the White Bear Theatre echoes that sense of transformation, re-writing and passage, in its form and narrative.

The story follows three young men who are old friends, going about their everyday lives in post-war East London. As the play progresses flaws in their relationships are exposed and the dynamic changes, particularly with a girlfriend thrown into the mix. As any good Pinter production should, it offers an acute attention to detail, using vernacular language that fascinatingly pins down an exact time period and place. It also depicts difficult themes in an unstable world, including mental illness and domestic abuse; sadly reminiscent of today.

All of the actors offer focussed, meticulous performances. Ossian Perret as Len plays a highly entertaining yet poignant, oddball character and is endlessly watchable. He’s often hyper, plays the recorder and knows the bus timetable inside out. Len also hallucinates that there are dwarfs living in the garden – sometime friendly, sometimes terrifying. This exposes his inherent vulnerability, which is underscored by the volatile relationship his two friends develop.

Pete (Joseph Potter) is a bit flash, and works in the clothing industry. The only one of the three with a regular girlfriend, he displays an explosive temper, verbally abusing and humiliating her. Potter handles Pete’s challenging range of behaviours, from mental instability to extreme anger, with panache. Meanwhile, Mark (Charlie MacGechan) is an actor; a bit of a lothario, who quickly jumps into the girlfriend’s bed when the couple split up. This forces the men to re-examine the uncomfortable reality of their friendship. MacGechan gives a solid performance, but could perhaps inject more sleaze into his insidious seduction of Pete’s girlfriend.

Denise Laniyan plays Virginia in a sultry, understated fashion. A woman in an age when men ruled the home, Virginia is disquietingly compliant, even when abused. At the end of the play, when she has all the power, there was opportunity to really turn this on its head and emphasise the stronger side to her, which was teasingly close but didn’t emerge. I would like to have seen her be cockier in her triumph.

The staging is simple, using carefully selected furniture and props that succinctly pin down the time period. Thoughtful lighting enables us to visit multiple locations, and a pleasing sound design eases transitions between places. The lighting also effectively facilitates moments of intensity, focussing in on intimate scenes to literally give them the spotlight.

The term ‘Pinteresque’ describes features common to the author’s plays, many clearly present here. There are his long pauses, vernacular vocabulary, sometimes nonsensical dialogue, and incidents of aggression. Another thing his work is associated with is menace, and although dark and brooding I found the production a little lacking in this. I suspect that the characters, although precisely directed and giving sterling performances, were just a little too shiny. This might partially be to do with the accents, which weren’t entirely East End. I like a bit of grit in my Pinter and this production somehow lacked grubbiness.

That being said, it is a highly entertaining evening with a fine cast and precision direction. It will draw you in to an evolving, toxic relationship, leaving you laughing and squirming in equal measure.

The Dwarfs plays at White Bear Theatre until 5 June. Further information and bookings can be found here.

Previous: Review: The Breach, Hampstead Theatre
Next: Interview: Going From Online to Onstage Looking for a Hat