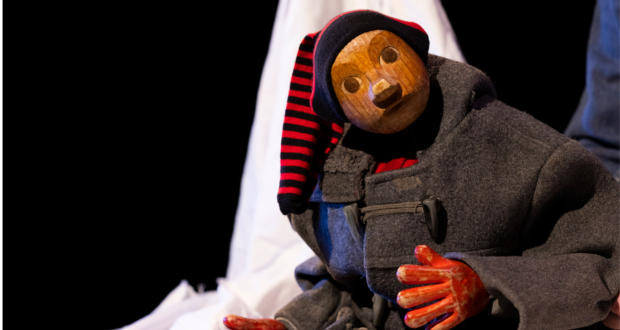 Sometimes when I go to see children's theatre there’s an overwhelming sense that there's 'a message': the kids are there primarily to ‘learn something’, and occasionally this worthiness sucks the fun right out of it. But here at the Little Angel you can forget about that. Pinocchio, performed by the hilarious Steve Tiplady, does have a message of caring and commitment, but it’s all in the context of enormous family fun and interaction. From the very start of the show Tiplady constructs a unique conversation with his audience – both children and adults – that changes every time. It’s&hellip;

A laugh-out-loud show, full of surprises! Making magic from ordinary objects, it lets dads shine, and shows we all deserve to be loved, whether person, puppet or penguin.

Sometimes when I go to see children’s theatre there’s an overwhelming sense that there’s ‘a message’: the kids are there primarily to ‘learn something’, and occasionally this worthiness sucks the fun right out of it. But here at the Little Angel you can forget about that. Pinocchio, performed by the hilarious Steve Tiplady, does have a message of caring and commitment, but it’s all in the context of enormous family fun and interaction.

From the very start of the show Tiplady constructs a unique conversation with his audience – both children and adults – that changes every time. It’s a wonderful performance: he has the spectators in the palm of his hand as he encourages them to shout out ideas, and then tailors the script to cater for their responses. At times it’s silly, raucous and anarchic, but it’s always an exuberant group effort. Without giving my age away, it has a bit of a Tiswas vibe!

His Geppetto is a dead-ordinary dad. He hates the cold of winter and likes bit of a chat. But here in the simple workshop, magic happens! We see and hear him using a real saw to cut through a branch. Then reality and illusion quickly begin to cross over when, from a simple piece of wood, he somehow extracts an exquisitely carved puppet boy, giving him arms and legs from scraps lying on the workbench.

The magic continues throughout the show as the workshop yields puppets hidden in plain sight, inventively transformed from everyday objects. A peg becomes a talking cricket, dustsheets transport us to a hilarious circus tent where acrobat gloves take the crowd by storm, and saws become the giant fish that swallows up the carpenter and his wooden son, under the sea. A particular highlight is a fox that is in reality all brush! The characterisation is brilliant, and there’s also some great slapstick comedy as Pinocchio sets off to explore the world.

This story is much more like Carlo Collodi’s original book than the familiar Disney movie, with only a minor nod to an extended nose. Louise Warren’s neat adaptation retains Pinocchio’s cheeky defiance – which the audience find hysterical – and some elements of mild peril, but reminds us that Geppetto is a constant, caring and really likeable presence for the boy as he learns from his mistakes. It culminates with a display of warm affection between them.

The puppetry is impressively varied and surprising, offering real possibility for imaginative engagement at home later (though don’t play with your dad’s chainsaw kids!). There is lovely use of lighting to spotlight individual objects and their transformations, and even an unexpected explosion of daylight as Geppetto determinedly sets off to look for Pinocchio. Additionally, the workshop objects are repurposed into percussion instruments that bring a wonderfully dramatic soundscape to the performance.

Pinocchio is aimed at ages 5-11, but there really is something for everyone in there to enjoy, including parents and carers. It’s a funny, innovative production, particularly suitable for any dad who is the proud owner of his own toolkit. So if you don’t rush to see it right away, why not think about getting tickets for Father’s Day in June.

Pinocchio plays at Little Angel Theatre until 26 June. Further information and bookings can be found here.

Previous: Interview: Hopping on the Kindertransport to the Little Angel
Next: Interview: Taking a Stroll Down Gutter Street