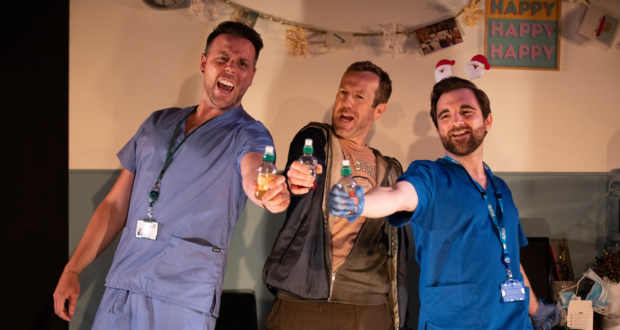 Gianni Schicchi is lamented as the only comic opera of the great Italian verismo composer Giacomo Puccini. Guided by music director David Eaton, Puccini’s cold hand has just written another one in The King’s Head Theatre’s La Bohème.

Bohemian novelist and romantic Robin (Daniel Koek as our new Rodolfo) finds a match on Grindr, (not the sort our original Mimì was looking for) in Lukas, a perfume salesman known to his friends as Mimì (Philip Lee). They intend on hooking up to the tune of the overly romantic ‘O suave fanciulla’ but take things slowly and fall in love.

Meanwhile, in the pub, sculptor Marcus (Matt Kellett) tries to avoid his ex, Marissa (Grace Nyandoro), out on the pull on Christmas Eve. In a great reimagining of the episode in Cafe Momus that does away with extraneous characters, the scene instead pulls down the fourth wall so Marissa can find them in the audience. As is to be expected, these turbulent lovers get drunk and end up back together.

This witty contemporary libretto gets its legs in Mark Ravenhill’s new production. Despite the clear focus on contemporary themes such as the familiar ker-klunk of a Grindr message notification and Marcus’ delight to have moved, in the third act, so close to a Lidl, the emotion and connection between Robin and Mimì remains.

This is never more the case than in the last scenes, as Mimì slowly dies of a drug overdose in Robin’s arms. Here, some beautifully plaintive singing from Koek and Lee wraps us in sorrow, just as Puccini intended. Although more RENT than Bohème, this event should come as a surprise to no-one, as Ravenhill uses Bohème’s brief musical interludes to foreshadow it, with multiple flash forwards to the moment throughout the show.

Eaton has done an excellent job at trimming down Puccini’s score for 90 minutes and one piano, bringing out the pantomime elements and giving due prominence to the opera’s catchy themes and motifs. This really works to Nyandoro and Kellett’s advantage; the former an absolutely electric soprano, for whom act two is completely her own, and is the highlight of the evening. Taking full advantage of the space, she is incredibly flirty with the audience, who sub in for the rest of the tavern. It’s such a shame that she isn’t in it much else (not their fault, Puccini’s). Comic baritone Kellett too is at home on the stage at the King’s Head Theatre having played numerous roles for Charles Court Opera. He provides excellent light relief and is a fantastic counterpoint to the soppy Robin. It all makes for a witty and entertaining evening of stripped back opera offering some fine performances, and set in a satisfyingly inventive new context.

La Bohème runs at the King’s Head Theatre until 28 May. Further information and bookings can be found here.