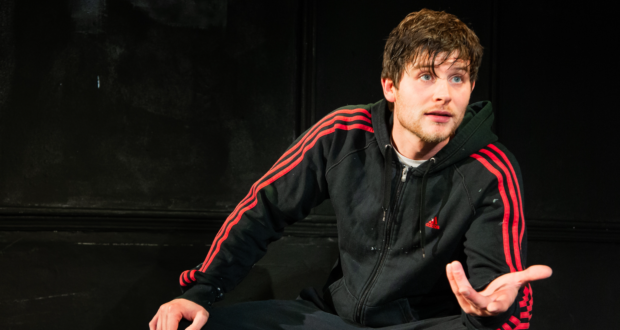 The White Bear pub and theatre have changed a lot since my last visit, some six years ago! After a £1.3M refurbishment before the pandemic, the pub space has a more modern feel but retains the intimate atmosphere, which has made it a key waypoint on the London Fringe Theatre scene. It was a fitting location for Encompass Productions‘ Homecoming Festival, showcasing new writing.

A poignant story of isolation and redemption, brought to life by impressive characterisation.

Scab (written by Luke Stapleton and directed by Jamie Biddle) deals with an unlikely friendship between a young man working night shifts in a coastal English town, and an isolated veteran estranged from his family. The show begins with the un-named narrator (Conor Lowson) saving the life of the old man, who he finds collapsed outside a pub. The two form an unlikely and sometimes uncomfortable friendship, which dredges up difficult memories.

The story is well crafted, raising notions of social isolation, anger, trust and, eventually a form of redemption. The performance was full of colourful characterisation and zingy one-liners, but had a strong emotional core to balance the more light-hearted moments. Lowson clearly enjoyed playing his role, impressively personifying the narrator, while bringing to life a host of secondary characters. Frequent breaking of the fourth wall invited the audience into the story, and it felt like a tale being told by friends over a drink. The programme hinted that Scab has, at times, had a difficult journey and many iterations, but this format seemed like a winner.

A promising plot device ties together a series of monologues: a work in progress which has space to mature and develop.

The second half of the evening featured the ensemble piece Dreamliner, written by Dominic Conneely Hughes and directed by Adwitha Aramugam. It describes the events of a short airline flight in which all passengers and crew experienced vivid hallucinations. This plot cleverly linked together a series of monologues (the interviews of the passengers describing their experiences), interspersed with scenes of the investigators piecing together the facts, to deliver a report on the incident, and come to terms with their own misgivings and doubts.

The individual monologues, which describe the hallucinations, were inspired by the performers‘ own experiences. While this helped to bring authenticity to the delivery, I found that these accounts were not as vivid as one might expect or desire from the premise of the play. Indeed, the “hallucinations” often seemed more like witty or astute observations about our world and society. Although these were enjoyable to watch, I felt that an opportunity was missed to craft more diverse and sensory representations of such delusions, involving light, colour, and sound. Some monologues did go in that direction: for instance, Tara Choudhary‘s description of walking into a bar to find all her former lovers there too. The beauty of this monologue was the organised heckling from the ensemble, which represented the chaos in her own mind as she tried to escape the situation. The ensuing cacophony delivered some genuine laughs while the tension built: the soundscape helped to build a vivid picture for the audience.

The interspersed scenes between the investigators provided timely breaks between monologues and helped to structure the story, although I couldn’t help wondering why the authorities had been so concerned by the incident. Indeed, no one had been injured, and in the show’s stylised recreation of the plane journey the passengers all seemed perfectly calm after what ought to have been a traumatic ordeal. Further, the described hallucinations seemed largely upbeat, or comic, with only occasional dark themes mixed in. All this contributed to a lack of urgency to justify the investigators barking at each other and breaking down as they fail to understand what happened.

Despite these reservations, the plot device had a lot to offer and the cast clearly enjoyed performing the script, underlining that. I suspect that Dreamliner will continue to develop and mature (it is still described as a work in progress in the programme), so that it can reach that potential.

All in all, these two productions provided a vibrant and entertaining evening; a great showcase of interesting new writing. The Homecoming Festival marks Encompass Productions’ 12th year in operation, and it’s clear that their mission to foster new work is in full swing.

Homecoming Festival has completed its run at The White Bear Theatre.