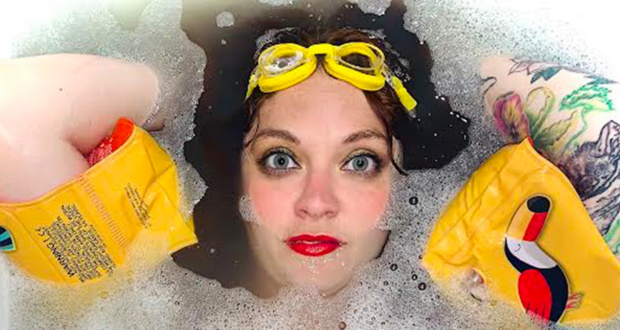 The Hope theatre is a little 50-seater venue in the Hope &amp; Anchor pub in Islington. As ever with a venue that small, the possibilities for complete absorption are endless. It also means thought there is nowhere to hide. Happenings opens with a couple on a sofa having an argument.&nbsp; Jane (Grace Collett) is desperately hung over, having spent the previous night drinking excessively whilst complaining to anyone who would listen about the mundanity of her life, to the extent that she declared she wanted to throw herself off the nearby Beachy Head. Her boyfriend Joe (Tom Hobart) is&hellip;

A story with a heart wrenching story at its core, but muddled by over complicated plotlines and unnecessary props.

The Hope theatre is a little 50-seater venue in the Hope & Anchor pub in Islington. As ever with a venue that small, the possibilities for complete absorption are endless. It also means thought there is nowhere to hide. Happenings opens with a couple on a sofa having an argument.  Jane (Grace Collett) is desperately hung over, having spent the previous night drinking excessively whilst complaining to anyone who would listen about the mundanity of her life, to the extent that she declared she wanted to throw herself off the nearby Beachy Head. Her boyfriend Joe (Tom Hobart) is at a loss as how to offer comfort whilst being appalled at her crass declarations of suicide in a town beset with such tragedies.

Jane’s endless self-absorption becomes really quite painful. She appears to be grappling with the meaning of life without wanting to take any responsibility for it herself. I am sure the characterisation is intentional, but her diatribes are lengthy, wearing the patience of the spectator. Both actors are adequate but lack light and shade: Collett in particular mainly shouts her lines, whilst Hobart rarely changes the rhythm in his speech delivery and is permanently fixated at one spot in the distance.

The introduction of Jane’s best friend, Fran (Zo Biba-Leonard) does bring improvements. Fran has an edge to her, and so feels considerably more realistic as a character. She has a false brightness that suggests something hidden and fragile. Biba-Leonard manages to capture this nuance brilliantly and is clearly comfortable in such a small space.

The heart of this piece focuses on suicide; the emotional and mental anguish and isolation that compels an individual to take that irreversible, traumatic, final step. The final scene sees each actor holding up handwritten plaques with names of individuals that have died so tragically in this way. It is a genuinely heart wrenching moment.

This is clearly a subject that resonates with the cast and creatives and deserves to be treated with respect and attention. Unfortunately, clarity would have been better achieved if much of the structure and plot had been reduced.  Each of the three main characters are seemingly burdened with mental health issues, suggesting they are suicidal. This just obfuscates the genuine trauma that one of them is hiding. There are plot developments at the beginning, such as an incident with Joe’s dog, which are just bizarre and reduce the credibility of the piece, resulting in subsequent declarations, vital to the plot, feel meaningless. Then there are characters, such as Fran’s dad, that are completely surplus to requirement. I really don’t know why they are there. There is a lot of prop detritus in the living room, not least the amount of junk food that was eaten that left me queasy, which further detracts from what was going on, particularly when the actors needed to clear it up at the end of the scene. Less in all of these cases would definitely have been more.

That’s not to say all is bad, because of course it wasn’t.  The gap between scenes are punctuated with strong musical choices and the ending is moving and unexpected. The heart of the story deserves illumination, but to achieve it, this piece requires a good edit.

Written by: John Berry, with additional material by Zo Biba-Leonard
Directed by: Matt Turpin
Produced by: Not Your Muse Theatre

Happenings has completed its current run at The Hope Theatre. It will play at The Space on 12 and 14 June. Further information here.

Previous: Interview: Dictating To The Estate
Next: Review: A Final Act of Friendship, Bridge House Theatre