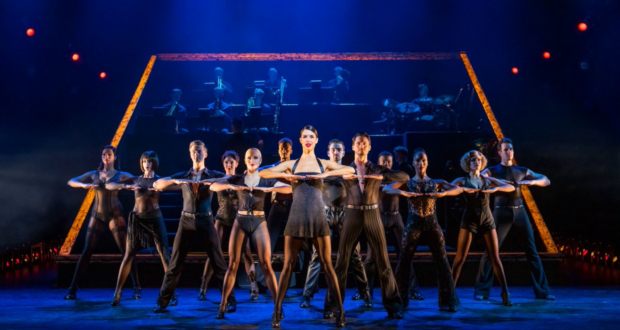 Created by musical theatre icons John Kander and Fred Ebb and featuring choreography from the master himself Bob Fosse, Chicago truly has become one of the musical greats. It’s probably had more revivals than Roxie Hart’s had men! Now, this sassy, international smash hit has just embarked on a national tour of Great Britain, kicking off in blood-stained stiletto heels at the glorious New Wimbledon Theatre.&nbsp; This searing revival puts the music into musicals, the show into show tune and the jazz into jazz hands. The sass, sweat and sex of this show is just off the scale, and&hellip;

A sizzling hot musical, so splendiferous it’d be criminal to miss it!

Created by musical theatre icons John Kander and Fred Ebb and featuring choreography from the master himself Bob Fosse, Chicago truly has become one of the musical greats. It’s probably had more revivals than Roxie Hart’s had men! Now, this sassy, international smash hit has just embarked on a national tour of Great Britain, kicking off in blood-stained stiletto heels at the glorious New Wimbledon Theatre.

Set amidst the razzle-dazzle decadence of the glorious 1920s, Chicago is the story of Roxie Hart, played to perfection by former Corrie star Faye Brookes. Hart is a housewife and nightclub dancer who murders her on-the-side lover after he threatens to walk out on her: seems fair enough if you ask me. Desperate to avoid conviction, Roxie dupes the public and fame-obsessed media by hiring Chicago’s slickest criminal lawyer to transform her malicious crime into a barrage of sensational headlines, the likes of which might just as easily be ripped from today’s tabloids. Brookes, fresh from her Dancing on Ice success, is sheer musical theatre precision. Her facial expressions and comic timing are constantly on point and her renditions of both ‘Roxie’ and ‘Me and My Baby’ were show highlights.

Roxie also has to dupe her rival cellmate, the infamous Velma Kelly, tonight played brilliantly by West End star Djalenga Scott. What Scott does with a chair in ‘When Velma Takes the Stand’ is quite something to experience, as is her sensational voice. Scott and Brookes together are deliciously lethal femme fatales that own the stage with every wink, grin and sashay, so make sure their names are on your lips.

Russell Watson as the esteemed, yet delectably sleazy lawyer, Billy Flynn, razzle dazzles as always and Three Degrees pop sensation, the incomparable Sheila Ferguson, as Mama Morton is thrilling. Jamie Baughan is the downtrodden Amos – a character which breaks my heart each time I see this show – and is wonderful. His ‘Mister Cellophane’, white miming gloves included, was beautifully sung and had the entire New Wimbledon Theatre audience giving him a massive ‘Aaaaaaaaw’ as he slowly disappeared off stage. As smitten tabloid journalist Mary Sunshine, BE Wong is a delight:  his deliberately inaudible rendition of ‘A Little Bit of Good’ was comedy gold. Indeed, this entire company, with all the hot and sexy backup boys and girls, is just flawless.

Walter Robbie’s slick direction, combined with Ann Reinking and Gary Chryst’s choreography and the entire onstage orchestra effortlessly belting out hit after hit, really makes this a big bambooz-a-ler of a show to devour! Get your bowler hat out, put on something black and tight fitting and be prepared to have your flim flam flummoxed…and all that jazz.

Chicago plays at New Wimbledon Theatre until 21 May as part of a UK wide tour. Further information and dates can be found here.

Previous: Review: This Last Piece of Sky, The Space
Next: Book Review: Noël Coward: The Playwright’s Craft in A Changing Theatre