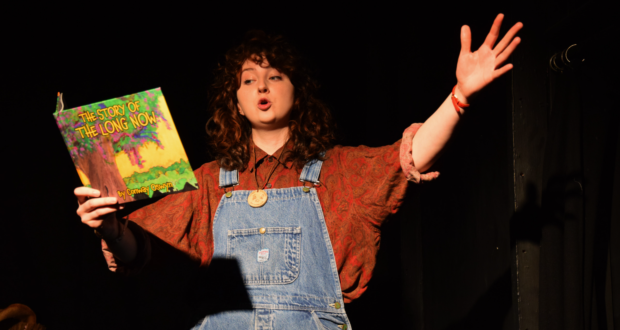 Author: Everything Theatre in Features and Interviews 9 May 2022 0 517 Views

Gutter Street on bringing their Street Night to ChewFest

We had our first walk down Gutter Street last year with Feathers. At the time we weren’t aware of the company, but the play certainly had us interested in future work. We also had no idea about their Gutter Street Nights. But Chewboy Productions were singing their praises during a recording of our podcast, and informed us that they would be taking over the Friday night of the upcoming ChewFest at Lion and Unicorn. So it seemed the perfect opportunity to delve into their world and find out just what it is that they have planned.

It was our pleasure then to chat with co-founders, Leo Flanagan, Isobel Warner and Josh Barrow and ask, just where is Gutter Street?

What do you have planned for ChewFest?

We’re going to be bringing Gutter Street Nights to ChewFest. Our monthly new writing night for musicians, poets, actors, comedians and all manner of artists. We ask five featured performers to create or curate a piece of work centred around one central theme, this month’s theme is ‘Homeward’. We then do a little pub quiz and open the stage for the audience to jump up and share whatever they like on our open mic. We usually host these nights at our spiritual home of Green Note in Camden but we’re excited to travel up the northern line one stop to Kentish Town and bring Gutter Street Nights to the Lion and Unicorn Theatre!

How have you gone about selecting the five creatives for the night?

For this particular event we have asked five artists who have all performed with us at some point over the last few years. We usually programme creatives from those who have reached out to us or chatted to us on one of our nights. Our aim with the whole company is to build a community and develop real relationships with creatives. It’s great when someone has come down to one of our nights to support a friend and on a whim jumps up on the open mic, and then the next month they’re sharing their first bit of writing as a featured performer with us.

Do you help with input and advice along the way?

We don’t really involve ourselves with the writers pieces. We do strive to get at least one first time writer at every one of our nights, people who have flirted with the idea of writing something of their own but never got round to it. We’re always there for those creatives and if they would like a bit of support or guidance we’re more than happy to help and provide a bit of feedback but really the first time we’re seeing their pieces are when they’re on stage! 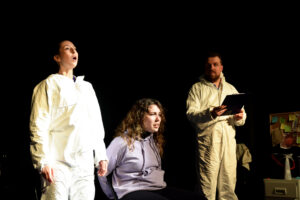 Your own work is all based along your fictional “Gutter Street”, does this mean they are all based on the same dystopian world that existed in Feathers?

All of our plays and stories do take place in our fictional ‘Gutter Street’ world, but we’ve given this world a very wide timeline of 10,000 years to fill! Feathers takes place somewhere along this timeline and we do have other plays and tales that take place around the same time, but our next story could be 1000 years before the events of Feathers. We didn’t want the plays to be direct continuations or sequels/prequals but anthologies. Individual fables that if you were to watch one on their own you’d enjoy the story presented to you, but if you had seen a few and connected with some of the moral questions, myths and background set up, you may walk away with a different experience to someone who hasn’t.

Is ChewFest a great opportunity to get your work seen by a new audience?

Absolutely! We are all massive fans of the work that ChewBoy put on and when they asked us to produce one of our ‘Gutter Street Nights’ for the festival we had to jump at the chance. It’s also a great challenge to adapt from our regular venue (Green Note) which is so ingrained into the DNA of our nights to the beautiful black box space of The Lion and Unicorn. We hope that our regulars feel the vibe and personality of Green Note bleeding through at the Lion and Unicorn this month and that newcomers get a real flavour of our regular nights.

And you promise an open mic slot at the end of your evening at ChewFest, is that something you normally do, do you get many takers then?

We do an open mic at the end of every ‘Gutter Street Nights’ and it’s always such an energetic and exciting part of the evening, because it’s full of creatives who didn’t really expect to perform or share that little poem they’ve had written on their notes app for months, or that song they’ve had in the back of their minds. We’re never short of people who want to get up and perform, especially after watching the first five featured performers. They’ve seen the warm, enthusiastic and vocal response from the ‘Gutter Street Nights’ audience and think ‘I fancy a bit of that!’. We also film everyone’s performances so they can take it away and use it for whatever they like, which as performers ourselves, we know is really useful.

Our thanks to Leo, Isobel and Josh for their time to chat with us. Gutter Street will be taking over the Friday Night of ChewFest. Further information and bookings can be found here.