Home » Features and Interviews » Interview: Hopping on the Kindertransport to the Little Angel 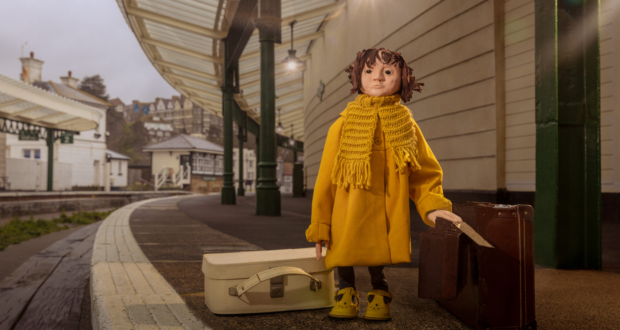 Photo credits @ The Other Richard

Interview: Hopping on the Kindertransport to the Little Angel

Kinder is an immersive new show for children, hitting the stage of the Little Angel Theatre this May. Set just before WW2, it tells the story of a small Czech-Jewish girl called Babi, who is sent away from her home on a journey to safety in the UK.

We had a chat with Director Molly Freeman of Smoking Apples, the award-winning puppetry and visual theatre company, who have created this intriguing production, to find out more.

So Molly, Kinder is about the Czech Kindertransport rather than the more familiar German one. Did they both happen at the same time? Why have you chosen to explore the Czech one?

The Kindertransport in Germany and Czechoslovakia, took place at the same time, yes. This was all just before the outbreak of WW2, in 1938. The catalyst for this movement was Kristellnacht, where the Nazis undertook violent acts against Jewish people and businesses in Germany.

A lot of people are familiar with the German Kindertransport, but Europe and the Jewish communities were very connected so word got out elsewhere that these violent acts were taking place. As a result, the British authorities allowed minors to seek refuge and enter Great Britain from Germany and German-annexed territories, which Czechoslovakia fell under.

We wanted to explore the Czech Kindertransport for a number of reasons. Firstly, there can often be a sense of compartmentalisation with these stories, as in, ‘oh that happened in Germany because that’s where the war started’. But we wanted to reflect that the repercussions of the early situation in Germany had a ripple effect across Europe, impacting and affecting a huge number of people elsewhere. Secondly, the Czech Kindertransport was instigated by Sir Nicholas Winton, a British man, and myself and my co-artistic directors, Matt and Hattie used to live in Prague, so it felt like we would be able to tell this story from a place of understanding, in terms of the locations and cultures. 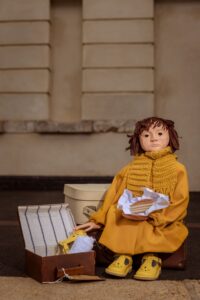 I understand you have rather an unusual immersive space for the show. Can you tell us a bit about it and how the audience fit in?

The space is a freestanding, self-sufficient box structure. The audience are seated inside and the performers play from the outside of the box inwards, through a series of hatches and openings. The set allows us to be completely in control of the show environment and to reflect the visceral nature of Babi’s journey; her excitement, bombardment and, at times, fear of it all. It also means that wherever we take the show, the audience can always have the same experience, whether that’s in a theatre, a community centre or a school hall.

Smoking Apples are renowned for their fabulous puppetry work: I was very impressed with your giant walking tree last summer! What kind of puppets are in this show? And why use puppetry rather than just do a straight play?

Ah yes, that was our Arbor, the tree! He’s pretty hard to miss! Kinder uses a combination of table-top bunraku-style puppetry, shadow puppetry and object manipulation. We are a puppetry company but we always ask ourselves ‘why puppets?’ at the start of every show. For Kinder, it allows us to jump backwards and forwards in the timeline of Babi’s story, but the form itself allows us to bring new resonance to actions. Across her journey, the actions that both Babi and the people she encounters around her are magnified and this helps the audience to focus on them as catalysts. When an actor performs an action, you read it as a whole but you may miss the importance of it because it is natural and already in human form. When a puppet performs an action, it is magnified because of the effort and care that has to be taken in order for it to do it.

Are there any other interesting or unusual production features you can tell us about?

In Kinder we are, for the first time, using a combination of shadow puppets, silhouette and OHP puppetry to form our overall shadow puppetry strand. This is a fairly new system of working for us but enables us to have a more film-like quality to the work.

We’ve also taken inspiration from Czech illustrators, such as Miroslav Sasek, to create illustrated backgrounds for the shadow puppetry, so there is additional visual depth there. Czech illustration, as a broad style, is very striking and often warps scale and perception, which felt appropriate as a reflection of Babi’s young mind. We also use verbatim throughout the show, so there are segments of stories from real people who were evacuated on Kindertransport trains. The Voice/Vision Holocaust Survivor Oral History Archive kindly gave us permission to use them and the piece would be very different without those.

What themes does the show explore? Presumably, it’s not just a bleak and depressing war story?

Not at all! Mostly, Kinder is about hope and about how the acts of kindness that Babi encounter along the way really do make all the difference to her; in fact, they save her. Of course, there is difficult content in there and we wouldn’t be doing the story justice if we didn’t cover that, but it’s a tale of humanity, in all its various forms. For me, that’s what’s so compelling, particularly in light of the situation in Ukraine. Despite nationality, despite culture, despite race, despite religion; what binds us is that we are human and if we can hold on to that, kindness will prevail.

You’ve made a show for older children, age 11-16, which is brilliant to see, as teenagers can often miss out on this kind of really creative, visual theatre. Is Kinder just for schools, or for wider family groups?

We wanted to make a show specifically for teenagers because as you say, they’re often missed out.  We regularly work with young people, so something the story focuses on is this idea of identity and what that means. Teenagers are often asked to make really tricky calls on their futures; who they are, what they want to be. But ultimately, it’s sometimes OK to not have all the answers, to change your mind, or to just not know.

We’ve also reflected the age group in the actual construction and presentation of the work. Sometimes shows can feel physically and emotionally very distant, making them hard to engage with. By placing the audience literally in the centre of the action and actively removing the preconceived notion of sitting still and being quiet, we hope that their engagement and investment will be much greater. Kinder is definitely something that wider family groups can enjoy though, and whilst we wouldn’t recommend it for younger audiences, it’s a great show for families, as familial ties are at the heart of our story and you see Babi as a grandmother, revisiting her past with her Grandson.

What do you hope your audiences will come away with from Kinder?

As I mentioned, Kinder is a show about hope. There are joyful parts and there are sad parts, but ultimately it is a reminder of all of the things that unite us when conflict tries to divide us. Being sat inside the set, with the show taking place around you, brings a different perspective on the work, one that we hope will resonate with our audiences.

I believe the show is going on a journey of its own, isn’t it? Where will your tour take you?

We’re opening the show at the Little Angel Theatre in London and then we’ll be visiting the National Holocaust Centre and Museum in Newark (near Nottingham) before heading on to Harwich Festival. We’re planning on touring Kinder fully next year and will be visiting theatres, schools, festivals and community centres.

Many thanks to Molly for taking the time to talk to us. Kinder is on at the Little Angel Studios from 12–14 May, and is aimed at ages 11-16. Further information and bookings can be found here.