Home » Features and Interviews » Interview: From France. With Love 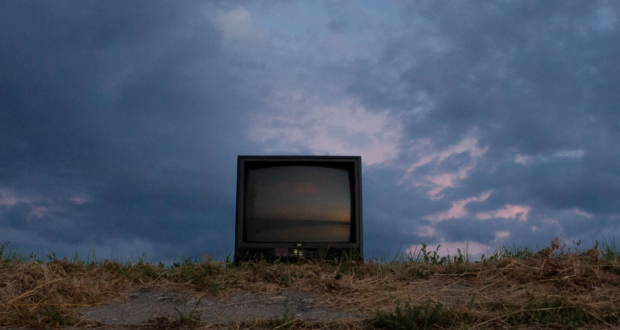 Author: Everything Theatre in Features and Interviews 11 May 2022 0 705 Views

This Last Piece of Sky is set across two cities, following two young people. The first is Louis, who finds himself in hospital as his family cannot cope with his behaviour, and it’s here he dreams of a girl called Sarah. The second person just so happens to be called Sarah, and she also is causing her family anguish due to her behaviour at school. But what is it that connects the two?

The play is from French writer Kevin Keiss. But don’t panic, Charis Ainslie has translated it into English for us, and along with director Sibylla Archdale Kalid, is now bringing it to The Space next week. We catch up with both of them in this interview to find out why they think audiences are going to love this play.

Our knowledge of French theatre is, to be honest, lacking, so we thought we’d ask Charis and Sibylla to give us a little education.

Bonjour, mesdames… ok, that’s the limit of our French*, but we guess you speak it?

Charis: Yes, I’ve been visiting France since my early teens and lived there for two years. As a translator, I’m working with it in written form pretty much all the time, and I’m currently working with three French writers so am getting to speak it a lot more. 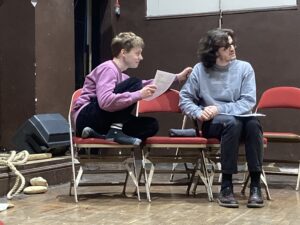 So what first attracted you both to this French play?

Charis: I loved the mysterious feel of it. It’s quite poetic, but it also has a real sense of urgency to it. When I first read it I couldn’t wait to find out what would happen. The characters are brilliant – right from the start I could hear what the characters would sound like in English, and that’s really exciting. I particularly loved the character of Granpy. He initially comes across as a cantankerous old man, always finding fault with his grandchildren. But as soon as the family is threatened, it becomes clear that he’s fiercely loyal and will do anything to defend them.

Sibylla: The first time I read it I was left with a lot of questions and a lot of images in my head of the key moments in the play; a TV that won’t tune in, a young person’s scribblings on a wall, a family walking to a bus stop. The text is fairly sparse and doesn’t explain itself, so it was a tantalising creative challenge to get under its skin and fill in the gaps.

How easy is it to translate a play such as this? Do you have to alter much to keep the lyrical flow of the original?

Charis: The writer, Kevin Keiss, uses language creatively to create the ‘other-wordliness’ of the play and in particular to convey the mental state of the main character, Louis. Louis believes he has discovered the secret of the universe, and his language expresses both his wonder – in flowing, lyrical passages – and his sense of frustration and despair – when his speech becomes clipped and truncated, marked by abrupt hiatuses. The biggest challenge was to recreate that without worrying that it sounded ‘off’ or awkward. Once I gave myself permission to recreate the strangeness of the language, I really enjoyed playing around with the poetry of it and recreating its rhythms.

The play explores mental fragility in young people, is this a theme that is the same whether it’s France on England?

Charis: I think it is, yes. Although Louis is depicted as a mathematical genius, there’s a truth beneath that romanticised version of neurodiversity. The isolation. The medical world’s preoccupation with diagnosis. The sense that no-one is actually listening to you and what you have to say – if you could even put it into words. There’s also something hugely relatable in the way Louis’s family responds to him – their concern, and their sense of powerlessness as they try to support him. And after the last two years there’s something universal in the feelings of isolation depicted on stage. But there’s also a sense of solace created by the unlikely friendship of these two young people, without the play ever descending to offer solutions or trite answers.

Sibylla: I think what’s so compelling about the play is that it’s not clear that it is about mental fragility; is Louis mentally unwell, or is he on to something that the rest of us are too close-minded to entertain? Either way, as Charis says, the resulting experience of isolation is close to the bone at the moment, whichever side of the channel you live on.

The play is set across two locations, one of which has experienced a military coup, is this based on real events or pure fiction?

To answer this, it’s helpful to start with Louis’s experience. Louis is discovering – or at least suspects – that the universe does not operate along our accepted notions of space and time. It’s significant that, while nobody believes him, the world of the play confirms his suspicions. We’re invited to believe in a world that could be tomorrow or yesterday, that has echoes of real events but could also be presaging the future. The clues in the play don’t necessarily point to a real place or a given reality but invite us to believe in something we can’t explain. In that sense, we inhabit Louis’s world.

Have you thought how you plan to portray two separate locations when you are at The Space?

Sibylla: One of the challenges of staging the play has been depicting two distinct locations whilst also allowing for the increasingly fluid boundaries between them as the story goes on. Technology – a TV, phones – have been a useful way of delineating different time periods, and our design consultant, David Medina Aguila, has carefully designed the costumes to use colour and period details to indicate different times and places. The script itself also helps in this sense, as the tone and energy of the scenes set in the two places are notably distinct from each other.

Charis: We’re also going to be exploring the connections and porosity between the two worlds through sound, music and lighting. We’re working with a brilliant Sound Designer, Raffaela Pancucci, and a brilliant Lighting Designer, Catja Hamilton, and we’re very excited to see what they come up with! There’s already a strong musical motif in the play: Louis speaks of the genius of Glenn Gould – a Canadian pianist who made a famous recording of Bach’s Goldberg Variations in the 50s – and there’s a strong parallel between them: Gould was a musical genius, and a very eccentric individual. Music is also an inherent part of Sarah’s family – her grandfather was a classical violinist. One of the most poignant scenes in the play is when the family are forced to destroy their record collection because music has been banned by the regime.

You’re taking the play to a local school after your run at the Space, what is the reason you wanted to do this?

Charis: We want to make theatre for young people, and we want to make it accessible to everyone. The Space has strong connections to its local community, and we wanted young people there to be able to enjoy a theatre experience they might not otherwise have – to imagine other worlds and dream a little after what they’ve been through these last couple of years. It fits with our view of what theatre is about more generally. I mean, just this week people are talking about a show that’s charging £400 for a ticket! That’s the polar opposite of what we want to do. So many small theatres are putting on great work – and the Space has an incredible programme: great theatre, great acting and shows that will echo in you long after.

Any plans for what is next for you, or this play, after this run?

Charis: We’d love this play to have another lease of life – not least because it’s the first part of a trilogy! And I also have another play by the same writer for younger children that I need to find a home for. It’s about a boy whose father has died, and his quest to remember his father’s voice – aided and abetted by a huge whale, two beautiful golden birds and a family of guinea pigs. What’s not to love?!

Sibylla: Working with the cast on this play has only whet my appetite to explore this play further; it’s opened up so many possibilities and strengthened my conviction that this is a furiously timely piece of work, so we hope to bring it back to audiences soon. To continue Charis’ children’s theatre theme, I’m also in development with a BSL-integrated devised piece about a female astronaut for 7-11 year olds, which I am co-directing.

Merci beaucoup pour votre temps to Charis and Sibylla. This Last Piece of Sky plays at The Space between 17 – 21 May. The play will also be livestreamed on 17 May, and available for a further two weeks on-demand following the end of the live run. Further information and bookings can be found here.

* We would also like to apologise to our reviewer Jane Gian for suggesting we cannot speak French. Jane is fluent and will be even be reviewing Dom Juan at The Vaults during one of its French performances this weekend.

Previous: Review: Til Death Do Us Part, Theatre503
Next: Podcast: No Need for Wellies at ChewFest 2022