Home » Features and Interviews » Interview: Delivering For Arcola Outside 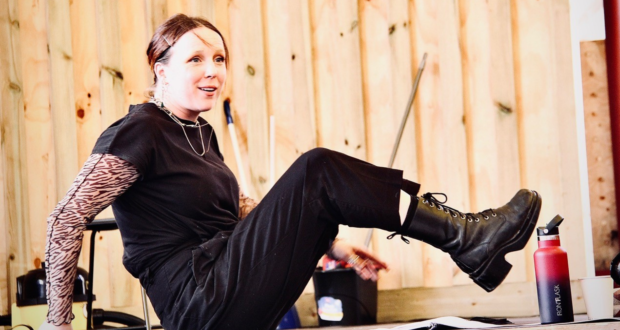 Author: Everything Theatre in Features and Interviews 21 May 2022 0 586 Views

We’ve all heard of the gig economy, a labour market characterized by the prevalence of short-term contracts or freelance work as opposed to permanent jobs. It’s certainly not new, but it is something that is becoming more and more normal in today’s ever-changing society.

One of the big drivers that has grown the gig economy is our desire to have everything delivered immediately. Not just your Amazon parcel, but takeaways and last minute groceries needed for tonight’s dinner. Which leads us nicely to Rainer, a new play coming to Arcola Theatre Outside in June. It’s about a solitary delivery rider called Rainer, the type you probably see passing you on the street all the time but never really think about once out of sight. The play followers Rainer as she cycles from job to job, creating stories in her head to help pass the time. But what happens when someone close disappears, and what effect does such a job have on someone’s mental health?

We slipped on our lycra shorts, hopped on our bike and headed out to meet up with director, Nico Rao Pimparé to ask more about the play.

What is it about Max Wilkinson’s writing that attracted you to direct Rainer?

Max has a unique, poetic and witty approach to text. His plays are as funny and incisive as they are dramatic. Rainer is the story of a young woman who stands for thousands of Millenial Londoners who love the city, but cannot seem to find their place in it. When first reading the script, I felt that Max had captured a very real part of London, that I belong to, and that I never see in TV, film or theatre. His frenetic, non-realistic writing mirrors the cynicism, but also the exuberance of our generation. Its disjointed nature makes it all the more closer to life.

The play feels as if it is going to be set very much on the streets, and Rainer will be doing a lot of cycling. How do you plan to portray this on a stage?

Rainer (the name of our protagonist in Rainer), does indeed do a lot of cycling! But I might disappoint you here – we don’t actually have a bike on stage. The story focusses on Rainer’s emotional and mental journey, on her friends, her family, her boss, her therapist and her love life. You will feel like you have travelled from the grimiest streets to the most exclusive parties, to clubs, to parks, and to chicken shops.

From reading the press release, the play feels a mix between a look at the loneliness of the job and a tale of a missing person, what is it we can really expect when we come to see the play?

Expect to laugh, cry and be moved by Rainer. The play does not tell you what to think. It is not an academic study. It is simply the story of one woman, struggling to find a direction in life, sometimes struggling to keep on going, and yet finding the resilience and humour to persist. Rainer is much more than a delivery rider – her brazenness and her curious and satirical outlook on life paint an unexpected and rebellious portrait of London. Expect to fall in love with Rainer, and to hate her. I can’t tell you too much without spoilers, but I know for certain you’ll see something you’ve never seen before. 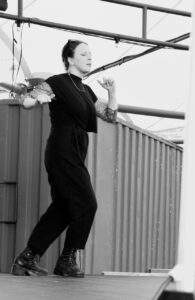 She is a delivery rider, which Max has experience of doing as a job – have you discussed the job with him so you can get those small details into your directing?

Of course. And so has our actor, Sorcha Kennedy. But the reality is that most of us, me included, have lived under the poverty line (currently set at £276/week) for many years. That’s the real issue. The mentality and outlook on life that comes with that kind of subsistence living, is the more nuanced and complex thing to look at. You can’t make it up. We have a twisted view of poverty in this country, we don’t realise how eclectic and varied the people who live below the poverty line are. I have lived in squats, eaten food out of bins, and preferred walking to taking the bus to save money. I won’t speak for others, but I can guarantee that that’s the norm in our industry, and for many young people currently living in London. There are too many depictions of Millennials in the culture that romanticise their mode of life, and not enough that give an honest and realistic picture of what their life is really like. Understanding that picture is what I have in common with Max, and what attracted me to this project in the first place.

Do you have much contact with Max as you rehearse the play, or is their role as writer now done and you keep them at arm’s length? Are writers all different in how they get involved at this stage?

Max and I do like to discuss and collaborate. This project was first born as a work-in-progress showing last October. The script has gone through many transformations, which I have read and given feedback on. Similarly, I’m keen to get Max’s opinion on my work – he’ll see a couple of run-throughs during rehearsals. But for the most part, he sticks to writing and I stick to directing!

How are you planning to get Rainer’s daydreaming across to an audience?

Through the magic of theatre! No – seriously, the whole piece is like a very long daydream. It is monologue, so it lets us into Rainer’s thoughts and lets her dream with her.  But I can’t tell you too much without revealing the plot. Sorry. You’ll have to come and see it!

It’s probably safe to say delivery riders are almost invisible to most of us, out of our thoughts the moment they are out of sight. Has working on this play given you a new appreciation for them?

Yes. And I think it does to most people who’ve worked on the play or seen it. The world of delivery drivers is fascinating – you can have anyone from a Colombian PhD student to a mother of three trying to make ends meet. And more broadly the play gives you an insight into the psychology and the intensity of the gig economy, and of what it is like to be young and broke in London.

The play is going to be on at Arcola Outside – does this space feel appropriate in gicing the impression of being out on the streets of London?

Yes – the space has been an amazing find for this play. The sights and sounds of London provide the backdrop for our play. Sometimes you won’t even be able to tell whether a sound is sound design or actually a helicopter flying overhead. Also – the sun sets over the course of the play, so you begin in broad day light and end in a much more intimate, dramatic environment. All of these are really very exciting challenges to work with. The play is about the city, and distinctly set in the city. It’s very appropriate. But don’t let the ‘outside’ space worry you too much – it is a gorgeous, covered and very cosy venue!

Our thanks to Nico for taking time out of his day to chat with us.

Rainer will play at Arcola Outside from 1 – 18 June. Further information and bookings can be found here.