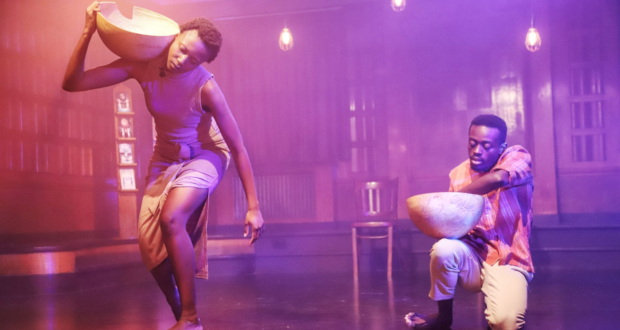 It's Friday night in Brixton, a community vibrant with life. I'm visiting Brixton House, an arts centre built on principles of sustainability, and now the home for the former Ovalhouse, famed for fringe productions and support of unorthodox artists. I'm interested to see if these principles and this history builds into tonight's show. Writer Sonny Nwachukwu’s Saturn Returns is a choreopoem. I admit I had to look that up. In fact, there's a lot I had to look up about the show, but having watched it I feel that's part of the learning process. It's a performance that combines&hellip;

A fascinating performance of poetry, music, dance and movement; sometimes confusing, but ultimately offers a powerful challenge to learn about and understand Black history in a new way.

It’s Friday night in Brixton, a community vibrant with life. I’m visiting Brixton House, an arts centre built on principles of sustainability, and now the home for the former Ovalhouse, famed for fringe productions and support of unorthodox artists. I’m interested to see if these principles and this history builds into tonight’s show.

Writer Sonny Nwachukwu’s Saturn Returns is a choreopoem. I admit I had to look that up. In fact, there’s a lot I had to look up about the show, but having watched it I feel that’s part of the learning process. It’s a performance that combines poetry, movement, dance, music and song to create an emotional response, rather than tell a linear story. Importantly, the term was coined by Black writer Ntozake Shange, attempting to move away from traditional Western storytelling. I also learnt that the Saturn Return is an astrological marker, signifying a 30 year cycle that brings challenge. Supplied with a helpful flier, I knew to expect serious themes surrounding Black history, including murder, suicide, and slavery, along with ideas of past, present and former lives.

My first impression on entering the auditorium was that it was choked with haze! It was uncomfortable waiting for the performance to start, with the first few minutes somewhat lost in fog. However, Rudzani Moleya and Durassie Kiangangu took to the stage with confidence, moving beautifully and claiming the space, as they communicated poetically about the Black experience with words and movement. The piece poignantly discusses the cyclical nature of events and how recognition of what’s gone before makes one stronger for the next struggle. Its form leaves impressions on the audience, as do cycles of history. A beautifully interwoven soundtrack of music, sound and voices from Ffion Campbell-Davies evokes inter-generational stories of Black people, as moments of trauma are sensitively represented.

The pair orbit each other synchronously, expressing ideas of swimming, struggling, growing; actively supporting each other at times, or building upwards with strong bodies. Their words tell of the Igbo Landing, a mass suicide by captive people refusing to submit to slavery, and of repetitive destructive actions. They are sometimes argumentative, speaking of pain and cycles of hurt, but the focussed performance illuminates how the past is always present in the modern world.

Key images struck me, including a confessional box sitting onstage, at one point extended and later deconstructed. It alluded to Western religion, contrasting with the mystical, ritualistic movements portrayed. Questions of needing to suffer to be redeemed then play against hope of escape through spiritual or psychic means. However, during other sections of the performance the dominant structure felt redundant, leaving me unsure if it was still relevant. At the climax a striking giant circle, radiating under the lights, is drawn with grain and danced upon, and the multiple histories related are played backwards in a dynamic, exciting choreography. It was fascinating to see this symbol of a cycle restructured from a solid shape to constellations across the stage, as the dancers redefined it.

As a white audience member, I honestly didn’t understand all of the story told, but I’m not sure I was expected to. Instead I felt perceptions of pain, love, hate, anger, dignity, growth; all of which speak toward the experience enacted. I thoroughly enjoyed the talent of the performers. Although initially confused, I left feeling I’d viewed a process of learning about history; about means for human sustainability, and that formed my response to the show. A response that is to look up what I’d seen expressed in an effort to understand it more and think differently about it.