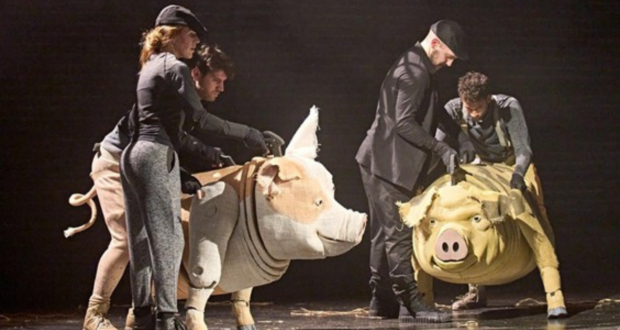 Here at ET we are all for supporting not just young and emerging theatre makers, but also writers. Some of our reviewers are still at university, many are just finding their feet with their writing. But we love how we provide a home to help them devleop their writing, and we offer them all the support that we can.

So how could we say no when we were approached asking if we could publish a review from 15 year old Angus to support his Silver Arts Award portfolio. And besides, we’ve never had a review from Newcastle, so it’s another place we can tick on our map of where we’ve reviewed.

So, over to Angus… 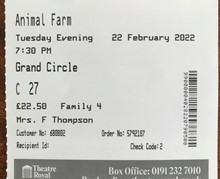 We went to the Theatre Royal Newcastle to see an adaptation of George Orwell’s Animal Farm on February 22, 2022. Animal Farm is an allegorical novel of the Russian Revolution by Communism, which led to the establishment of the Soviet Union. Written by George Orwell and published in 1945, the play retells the story through a puppet show, which was enjoyable and (mostly) faithful to the orignal book. I found the presentation engaging, especially as the theatre group used clever creative techniques.

The puppets were life-sized and fully articulated with a modern layered look, a bit like an armadillo. Although I’ve seen puppets before, I’d never seen life-sized one and was curious as to how well they would work. They were controlled by puppeteers in a few different ways. Some of the smaller ones, such as the birds and the cat, were simply held by puppeteers, dressed inconspicuously in black, and controlled by poles and wires. The medium-sized puppets, like the pigs, were half animal, half puppeteer. The puppeteers wore dyed trousers to look and act like the animal’s back legs, with the puppet controlled by various handles and levers. With the largest puppets, such as the horses and cows, the puppeteers would stand inside them and control it from there, often with the head controlled by a further puppeteer on the outside. This enabled the puppeteers to move freely around the stage, and display a full range of movement, expression and animal behaviour.

One thing I noticed about the animal expression and behaviour was that the puppeteers had clearly studied animal behaviour and action. For example, the goose’s head movement looked authentic; the cat groomed itself and cleaned its ears with very feline movements. They also showed the gradual decline in Boxer’s health from strong and robust to weak and exhausted by subtle changes in his leg position and drooping his head. There were times when the emotional expression of the animals was displayed in a human way, although this was mostly with the pigs as they became more humanlike. For example, Napoleon was cross at one point and stamped his foot in frustration. This combination of human and animal expression made the characters believable as animals but understandable in their emotional range.

Other things they did rather well was that even though puppeteers were all on the stage all the way through, they were just dressed in black. Once you grew accustomed to their presence you really didn’t notice them. This was enhanced by having the lighting highlight the puppets and leaving the actors more in the dark. The stage was also fairly bare with few props emphasising the animals. Props were used scarcely and only when needed to add to the story. However, those that were present communicated well what was happening and supported the story telling. For example, a lighting rig beam was lowered at times and smaller versions of the animal puppets were walked along it. This was used to show the constant drudgery of the animals working when harvesting or especially when building the windmill. It was also used to show Boxer’s commitment to the constant work that worsened his exhaustion.

A big screen above the stage showed the date line of the story; hours, days, weeks, months and years since the revolution. This conveyed easily the development of the story without unnecessary dialogue and explanation. It was also used to display the name, breed, age and method of death of the animals during the invasions. This emphasised the brutality of the human regime, and the way that the pigs gradually emulated their actions and method of aggressive oppression.

The music for the play was brilliant: at the start it was triumphal, jingoistic and almost Western America cowboy-hero style. It expressed the joy and elation of the animals after liberating themselves from the oppression of Mr Jones. You can hear it on the YouTube advertisement for the play below. This music slowly transforms to a darker and more overbearing feel as Napoleon becomes more dominating and tyrannical. It conveyed both an oppressive and overbearing atmosphere but also slightly mistrustful as the plot darkened and became more dystopian.

All the dialogue and soundtrack were pre-recorded, not something I would have thought of doing but it worked better than I could have imagined. It allowed the puppeteers to fully focus on their job and not have to concentrate on their lines and cues as well. From a practical perspective this also allowed the puppeteers to be more flexible as they could play more than one role, making the play more portable, thus keeping the ticket price down.

The play was fairly faithful to its source material except for a few small changes which made total sense. For example, in the book the animals, without any planning, chase Mr Jones out of the farm after being starved. But there is a lengthy backstory to this, so instead the play sees the animals plot to scare Mr Jones out. This was very humorously done and made total sense, avoiding the need for long explainations which would be a nuisance and boring. Other notable changes included turning Clover the horse into a cow. This once again made sense because having two horses and no cows as main characters would be rather one-sided, plus having two horses and a cow would just be more to transport, and make the stage too crowded. They managed to keep the relationship between Clover and Boxer faithful, but allowed Clover to also represent the issues faced by the cows.

Overall I felt the company did a good job of retelling Orwell’s allegory with their faithful recreation of Animal Farm. The puppetry was good and the visuals clever. If I had any complaints it would be that the back end of the plot was rushed, but fitting the entire book into an hour and a half would have been hard. It wasn’t rushed enough that it detracted from the plot. I think that it was a faithful yet carefully done recreation of Orwell’s masterpiece which conveyed the feel of the book well.

This production of Animal Farm has now completed its run at Theatre Royal Newcastle. More information can be found here.