You can use WP menu builder to build menus
Home » Features and Interviews » Interview: Every Rain Cloud Has A Silver Lining 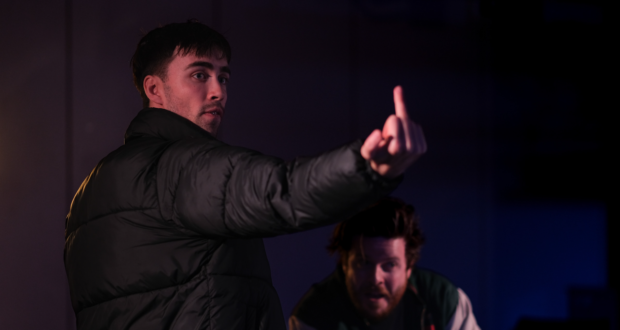 Interview: Every Rain Cloud Has A Silver Lining

Author: Everything Theatre in Features and Interviews 25 April 2022 0 306 Views

Julia Bentley and Elan Butler on A Little Rain In Monaco

It’s been a tough couple of years for theatre makers. And even if it isn’t Covid making life hard, it’s venues cancelling shows for completely different reasons! So our heart went out to Sober Riot Theatre who’s show, A Little Rain In Monaco, suffered that last minute cancellation earlier this year. But like all good theatre, it couldn’t be kept down for too long, and the show has now found a new stage to play on at The Pleasance (11 – 14 May).

A Little Rain In Monaco rasies that all-important question; how you or your team would handle the PR disaster of punching Phillip Schofield live on TV? For those with longer memories, you may recall it wouldn’t be the first time the deity of daytime TV has been attacked live on TV, just ask Carter USM’s Fruit Bat how it affected their careers!

And because ET is always here to support young theatre makers, we couldn’t really not ask them to sit down with us for the afternoon and tell us a little more about the show and it’s journey just to make it to the stage. So that’s just what we did, with Producer Julia Bentley and writer Elan Butler.

Let’s get this out of the way first, how excited are you that you’re finally going to get the play on the stage after everything you’ve been through just to get here?

Very, VERY excited. It’ll be special for us and the cast to finally have an audience reacting and (hopefully) laughing at this comedy drama. That adrenaline rush before a show is something that we’ve all missed and it’s just so special to get to do it at The Pleasance. The months preparing and repreparing have given us some big learning curves early on, which makes the final showing even more satisfying. We’ve been so lucky to have a supportive and friendly team of people working on this, who’ve poured everything into rehearsals and deserve a successful week of shows. The Pleasance has been a real shining light for us and we can’t thank them enough, we’ve been buzzing for weeks.

Have you ever considered the troubles you’ve gone through are karma for your play suggesting (in jest we hope) that national treasure Philip Schofield should be punched live on TV?

I (writer Elan Butler) feel like Phillip has been watching over the whole project since it began, him being the three things we all learnt about God in R.E, omniscient, omnipresent and omnipotent. We have joked in the past about there being some sort of Monaco curse, like we’re the last few characters in a Final Destination movie waiting for another catastrophe to happen…maybe we should have considered a character punching Holly Willoughby instead…maybe that would have had less consequences.

It feels like the play has more than a passing nod towards cancel culture. Is that a fair assessment?

It’s fair, but I (Elan Butler) feel like it talks about cancel culture in a way that isn’t too cringeworthy for the regular theatregoer. I think there’s a dangerous line to walk with anything too media or internet based in the theatre realm, it can quickly become quite generic and samey, we’ve aimed to avoid that.

Really, the main protagonist is on the verge of cancellation throughout the play but it’s about the inner motivation that drives him to walk that tightrope that’s interesting. What makes these celebrities enjoy being the bad guys? Is it an adrenaline rush? Is it validation? Or is it something deeper?

And there are themes of class, identity and mental health – are these common threads to what you have experienced yourselves trying to bring your show to the stage?

The characters in the play all struggle with the class difference between them, it’s what subconsciously drives them to do and say most things. The illusion that the grass is greener with money and fame, or perhaps not, is a discussion I’ve always strived to get in this play, even from the earliest draft. It’s something I’ve (Elan Butler) personally thought or assumed, like most immersed in the arts “industry”, I put industry in quote marks because I don’t even like the term, another thing reflected in the play that represents a somewhat class divide. Topics of identity also derive from real life. I’m very much interested in portraying the struggle I’ve seen of identification whilst immersed in lad culture or other repressive environments.

What do you hope the play will say to people, what do you want them talking about as they grab a drink at the bar afterwards?

I’m ( Elan Butler) cautious of saying what I hope because everyone takes different things and whatever I say it will be the opposite. I once heard Simon Stephens say a play should be like a football match, the audiences should be roaring and booing and kicking and celebrating, I agree.  I don’t want to see people endlessly talking, that’s Chekhov, I want to see action! So I’d hope people walk out feeling like they’ve witnessed a champions league final that finished 5-5 and went to extra time and penalties. Iwant it to be an experience, not just a play, and have them consider what really makes them happy, then put all their attention into it.

Sober Riot is another theatre company that has come out of East15, and not the first we’ve had the pleasure to chat to. Is there a reason that place seems to be producing so much fresh young talent?

The Contemporary Theatre Course at East 15 is definitely a breeding ground for fully-rounded theatre makers, it celebrates the art of making your own work and creates life-long partnerships with people that enable your work to flourish. We sort of accidentally (yet thankfully) became writers/directors/musicians/producers, during our time at East 15, where we began a journey (like many others) thinking acting was the only route for us. Often people find their people on the CT course, who they want to collaborate and make work with, or sometimes people discover they solely want to work individually, and that’s great too. It’s sort of a beautiful coincidence. It proves the only limitation to getting work as a creative is yourself, and that the possibilities of what can be created are endless with the right mindset. We have Uri Roodner (Head of The BA Acting And Contemporary Theatre Course) to thank for that!

The show now plays for 4 nights at The Pleasance, what plans do you have for after that? Or are you too scared to plan further ahead?

We’ve got a lot of work in the pipeline currently around a handful of projects, which will all be revealed across the course of the year, so everything depends on time, capacity, and dare we say it…funding. As a lot of emerging companies, we often have plans and projects in place, but then an opportunity is thrown our way that we weren’t expecting and steers our work into exciting, yet unexpected routes. At the moment what we’d love is to organise a small ‘A Little Rain In Monaco’ tour around regional theatres, so more communities can experience the show outside of London. We’re a Midlands born company, so bringing the show back to our home county is something we always strive for with our work.

And finally, are you going to invite Philip Schofield, we could help get an invite to him if you like?

We haven’t…yet! We’re not too sure how Philip would enjoy being fictionally punched on live TV, possibly he’d enjoy it? Who knows! But if the original contemporary theatre scene is Philip’s jam, then somebody get a big slice of bread to match. It’s a very tempting offer. Philip, if you’re reading this, would you like a ticket?

Many thanks to Julia and Elan for their time to chat. A Little Rain In Monaco will play at The Pleasance between 11 and 14 May. Further information and bookings can be found here.

Previous: Review: How It Is (Part 2), The Coronet Theatre
Next: Guest Post: Abuse of Power Isn’t Always So Black and White