You can use WP menu builder to build menus
Home » Features and Interviews » Interview: East Meets West In Ealing 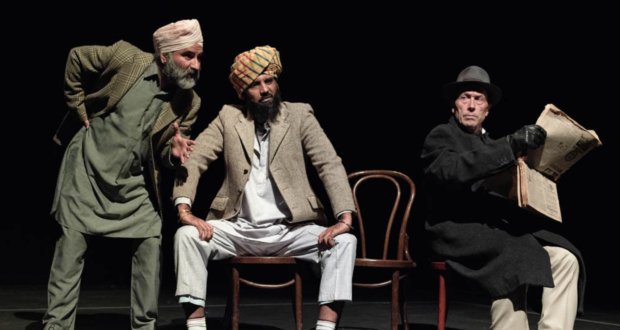 Author: Everything Theatre in Features and Interviews 22 April 2022 0 556 Views

Questors Theatre has only recently found its way onto our list of venues we’ve visited, and we do wonder just why it has taken us so long to do so. But now we know it’s there, we are overjoyed to share it with everyone. For an amateur theatre, they are still willing to be brave in their programming, and India Gate, coming to their stage at the end of April, certainly seems to evidence that bravery.

India Gate marks the country’s 75 years of independence and is made in collaboration with the Punjabi Theatre Academy. The play follows Edwin and Emily Lutyens and their connection with the Indian community in London and Delhi during the construction of the All India War Memorial (India Gate). Their story is interwoven with that of the Sikh Martyr Udham Singh, whose extraordinary fight for India’s independence from the British Raj began in 1919 in Amritsar.

So it was a pleasure to chat with Questors’ Howard Shepherdson and Punjabi Theatre’s Tajinder Sindra, who have worked together to bring the show to the stage.

What has brought you together to make India Gate?

Howard: I was involved in some outreach for the Questors looking at arts and community groups that we could get involved with and an ex colleague put me in tough with Tajinder. I remember looking at the Punjabi Theatre Academy website and thinking they would be interesting to get involved with in some way. We first met on Zoom, then face to face, and came up with the idea of a workshop production together to see how we got on. Alex Marker, the Questors Artistic Director, was keen on the idea and suggested a couple of performance nights in July las year.

Since Howard and I started working together in May 2021 we have gripped the interest for both communities, British and Indian, to enjoy the production and provide an opportunity to see the India freedom movement and British support for them, such as Lady Emily.

And what brought you to the story of Edwin and Emily Lutyens?

Tanjinder: The play was never intended to be a documentary; it is about storytelling and real people. It is the human story behind the history and that makes it accessible. I have seen and meet people who were affected by the Amritsar massacre and now we can provide a wider platform for people who have less knowledge of the incident.

Howard: Certain moments of history are revealed in the play but most are shown indirectly through their effects on people’s lives.  You could describe the play as a collection of personal stories.  and we have not tried to cover every complex detail, especially the political turmoil dominating events. There are clear signposts for the audience as to where a scene is set and during what dates. All designed to make the story telling easier.

For many of us, thoughts of Indian culture on the stage and screen will be filled with bright colours, dancing and drums, are we going to be treated to any of these in India Gate?

Howard: The play is set in the 1930s and 40s so dress codes were certainly not flamboyant amongst the British characters. However, the Indian roles are more colourfully costumed. And there are drums, even fireworks and a Punjabi song, but it is not a Bollywood style play by any means.

Tajinder: Moreover we are trying to preserve the old Punjabi folk style; poetry, singing and highlight the values of our tradition.  Also, bringing Punjabi culture in the play for abundance and entertainment. Generally when people think of Indian culture they immediately think Bollywood, whereas Indian culture is made up of 50 separate states, each rich in their own traditions. With India gate, we are giving an insight into just one of these that is Punjabi culture.

How has it been co-directing the play, when we assume you both come with very different styles and ideas?

Tajinder: British theatrical culture is very different to that in the Punjab. For a start they rehearse for much longer and go deeper into the technical aspects of a play. My productions are perhaps more spontaneous, based on more historical sagas, and India Gate focuses on one of the richest, that is Punjabi cuture. It is cast from both our companies and my actors have enjoyed working with the people from Questors and with Howard as a director.

Howard: For a full stage production at the Questors, someone had to take the lead and Tajinder let me take that role. He has been really valuable in helping keep a sense of authenticity, especially with the Punjabi characters. He has also given great advice on music and costume and what I have loved most is his passion for community and shared understanding. Although India Gate is a serious play, we have fun in the rehearsal room and our joint WhatApp group is busy day and night!

Is it importantant bringing Indian culture to the stage?

Howard: Absolutely, especially in a place like West London where there is a significant Indian population.  We have a unique shared cultural history, even if it has not always shown the British in a good light.  Theatre is a place where communites can have real dialogue and learning. Working with all different cultures is important and we need to see their lives on the stage. There are some brilliant Indian actors around now and we need to see more of them.

Tajinder: This has been our mission of Punjabi Theatre Academy to keep Punjabi culture alive, and performance is a great way to achieve this.  Working with the Questors is a great opportunity to expose ourselves to a new audience and connect with mixed audiences.  More India production please everywhere. Put them on and people will come!

And do you hope that it will bring in a very different audience to the theatre?

Tajinder: From the two workshop productions last year over 50% of the audience came from an Indian background, which was so satisfying. We also had five West London MPs attending. All this goes to show that there is an audience out there hungry for this type of project.

The play is in English and Punjabi, are you planning surtitles or will the language barrier not be a problem to understand what is happening?

Howard: We are using some subtitles both in English and Punjabi but there will not be any simultaneous translation because the play speaks well for itself and the story telling is clear.

There’s been lots of talk recently about reviewing our history books to better represent the less appealing sides of British occupation and the empire – is this something India Gate is likely to touch upon?

Tajinder: Yes, both directly and indirectly. There is a line that Howard wrote for one of the characters who is being congratulated on the birth of India as a new country. She replies that it is not a birth, but regaining something that was taken away. We need to recognise that. It is not rewriting history but perhaps revisiting it from a different perspective.

Howard:  I prefer to describe it as carefully stripping away ther layers of interpretation and discovering the truth. The history of the British in India is both complex and controversial and so are some of the events amongst a divided Indian population. It befits us all to understand that history properly. There is a lot we can celebrate even when we strip away the excesses of Empire.

What do you hope audiences will take away from watching the play?

Howard: One audience member spoke to me a few days after seeing a workshop performance last July and said “I learnt so much and wanted to carry on learning. So I went home and did hours of research on Google”.  But people also felt they had spent time listening to events unfolding in the lives of some fascinating characters. “I didn’t realise that these events happened” was another common reaction.

Tajinder: We also want people to realise that our shared heritage has made both nations what we are today and that understanding can only bring us closer together.

And after the run at Questors, what next?

Howard: We will be touring the play to Birmingham Crescent Theatre and the Lacemarket Theare in Nottingham during July and also hope to perform at the Nehru Centre for the Indian High Commission.  If we can raise the money we have ambitions to take the play to India.

Thanks to Howard and Tajinder for taking their time away from regersals to chat to us. India Gate opens at The Questors Theatre on 30 April. Further information and tickets can be found here.