You can use WP menu builder to build menus
Home » Features and Interviews » Interview: And stretch 2, 3, 4… 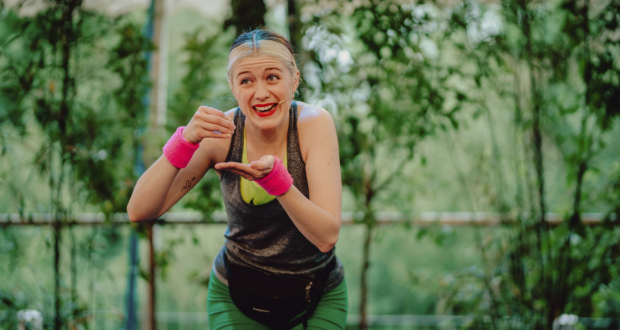 Author: Everything Theatre in Features and Interviews 27 April 2022 0 310 Views

Amelia Gann on her new one woman show, Dreamworld

Amelia Gann has already received plenty of plaudits for her show when it played at the Edinburgh Fringe in 2021. Dreamworld follows Cathy, a leiscure centre worker, who dreams of becoming a performer. Through multi-roling, physical comedy and dance routines Cathy takes us through her workouts via a fever dream of pop nostalgia, childhood dance shows, queer identity and suburban village life. It promises to be messy, camp, desperate, confused, entitled and kind of scary!

Not content to just sit back and bask in her glory of those Edinburgh reviews, she has given it a new name (more on that in a moment) and is about to bring the show back to London and Bristol in the coming weeks. (You can see the dates at the bottom of the page.)

Always in need of a good work out, we sent one of our team to wiggle into their leotard (not a pleasant sight, so we do apologise if you’re just eating) and join Amelia in her fitness class (we can’t call it Zuma for legal reasons), where we somehow managed to get some questions answered before we had to give up having pulled a few muscles we hadn’t used for quite some time.

First things first, why the name change then?

So apparently ‘Zumba Gold’ is copyrighted, who knew?? Well to be honest I should have known that as it’s a very well known franchise but when the show was getting off the ground everything was moving so quickly I never actually sat down to consider the title – so ‘Zumba Gold’, just stuck. Then after a little nudge from some Zumba lawyers who thought that I was teaching Zumba without a certificate I just thought it would be less hassle to change the title. So now it’s…Dreamworld!

The show sees you working in a leisure centre running Zumba classes, why on earth would you put yourself through such torture?

Well I really love dancing and I thought it would be so fun to perform a show centered around all this movement but I must admit that being backstage knowing I’m about to endure 50 minutes of such intensity I do wonder why. But also the Zumba class is such a wonderful environment for comedy, some people just want to have fun, some really mean business. It brings out some brilliant traits in people especially when the teacher is as crazed and narcissistic as Cathy.

Were you inspired by the many online fitness videos we were all encouraged to watch during lockdown?

100%. I was living with my partner and a friend at the time who both encouraged me to do a Joe Wicks workout with them, the next day I lost my taste and smell, coincidence? I think not. My preferred workout at that time was to play loud music and dance around the bedroom, and when you come to see the show you will be able to experience some of these moves.

How much training have you had to do to ensure you can perform what looks a very energetic show and not just collapse on the stage halfway through?

I’ve learnt my lesson now to make sure I am doing some regular yoga to stay strong. I also need to work on my vocal stamina as most of the time I’m speaking and dancing at the same time, otherwise the audience gets lots of lovely panting and heavy breathing.

And after so long locked down, were you able to fit in your lcyra body suit comfortably by the time you got to Edinburgh?

I was able to squeeze in luckily! But still nothing could quite prepare me for doing 9 shows consecutively.

Please tell us this isn’t an immersive show, you aren’t going to be asking us to get up and do a few squats or anything are you?

Although I do like to address the audience as my zumba students, there is no physical participation. A great moment at the fringe was when an audience member arrived wearing all the gear and ready to do a zumba class, I hope they weren’t too disappointed to realise that it was not in fact an interactive show.

Obviously there is much more to this than a woman wanting to be a performer, what can you tell us about the themes you address?

The play addresses how we ourselves are often the only person standing in the way of what we want in life – and although Cathy is quite an awful person I think that everyone has a little Cathy inside them, the self-saboteur, impatient and frustrated and driven completely by ego. But also some other general themes are pop nostalgia, queer identity, suburban village life and dance – things that are all very personal to me.

You took the show to Edinburgh Fringe last year, how did it go? 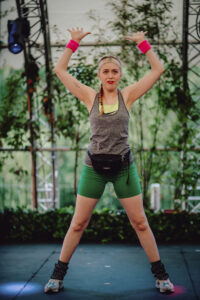 It was so brilliant, despite it being a very different fringe, with far less venues and attendees. I performed in Pleasance Courtyard which was a stage set up in a marquee with an incredibly green and luscious backdrop – it truly felt like I was in a village fete which suited the show perfectly. The audience responses were also fantastic and it was just great to see a real range of audience members enjoying themselves, and to come home with 5 and 4 star reviews (inc The Stage!) was the cherry on top.

Have you done many rewrites since Edinburgh?

Yes there has been some new material added which is very exciting including a new character and another dance routine (I think I’m insane). The new rewrite has only been performed once so far so I’m looking forward to seeing some more reactions to it.

You’ve got a short little tour coming up, what are your plans following that, more dates for this show or is there something else in the pipeline?

I’m definitely open to taking the show elsewhere but will probably take stock after the London and Bristol shows because producing your own work is pretty tiring! In the meantime I’ve been doing a bit of stand up comedy and am itching to create a new show, but would love to collaborate for the next one so I’m on the lookout for some like minded artists.

Thanks to Amelia for the workout and chat. You can catch the show in London and Bristol at the following venues: