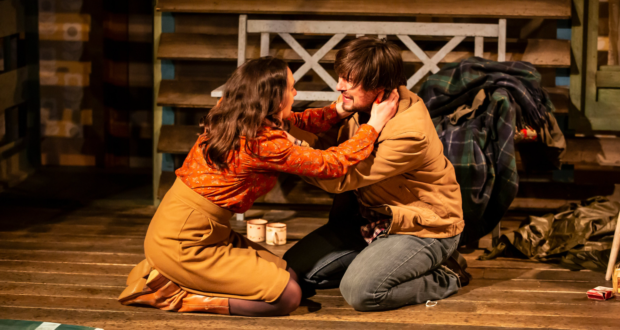 Southwark Playhouse truly is one of my favourite fringe venues in London. This glorious theatre, located between Borough and Elephant and Castle, has put on some incredible productions over the years and rarely disappoints. So, it's with a heavy heart that I write this review, as its current production of David Mamet’s The Woods is most unsatisfying, and by the end it wasn't hard to work out why it’s not been performed in the UK for 21 years.  Mamet is the glorious playwright who gave us theatrical gems like&nbsp;Oleanna, Glengarry Glen Ross&nbsp;and&nbsp;Speed the Plow,&nbsp;so I must admit I was intrigued to&hellip;

A confusing and convoluted 80 minute ‘battle of the sexes’ that lacked both lustre and purpose.

Southwark Playhouse truly is one of my favourite fringe venues in London. This glorious theatre, located between Borough and Elephant and Castle, has put on some incredible productions over the years and rarely disappoints. So, it’s with a heavy heart that I write this review, as its current production of David Mamet’s The Woods is most unsatisfying, and by the end it wasn’t hard to work out why it’s not been performed in the UK for 21 years.

Mamet is the glorious playwright who gave us theatrical gems like Oleanna, Glengarry Glen Ross and Speed the Plow, so I must admit I was intrigued to see The Woods, as I’d genuinely never heard of it. Set in a remote cabin in the middle of the woods, the play focuses on beleaguered couple Nick and Ruth who come to the cabin for a weekend away. It appears pretty straightforward at first, but within minutes you sense everything is not quite as it seems. As a premise, I was all over this: I love hidden angst, high drama and fraught tension. But this production never quite hit the spot for me, and I found the play overall to be quite weak.

Over 80 minutes the couple push their relationship to breaking point through a series of lost recollections and violent fights, only to rediscover their deep and tormented need for one another. The constant yin and yang of fights and reconciliations became predictable after a while, which might explain why audience members on either side of me were checking their phones every five minutes. There were some great key moments, one involving an oar smacked across the head and the other a drowning, where I felt the play could have escalated into a gorgeously gruesome stage adaptation of horror classic Eden Lake or dare I say it The Cabin in the Woods, yet alas it never did. Mamet’s script is incredible, but with monologues about oversexed grandmas and Martians, l left the theatre perplexed and let down, much like I did when I saw his most recent work Bitter Wheat, with John Malkovich, in 2019.

Francesca Carpanini as Ruth, making her UK debut in this production, is superb and really held the show together for me. I found her portrayal engrossing and annoyingly needy in equal measure. Her scene next to the tree trunk splattered with blood – cleverly placed by set designer Anthony Lamble among the audience – was quite something, but I wanted more. Sam Frenchum as Nick was good, but he never really came into his own and at times was acting by numbers. I guess my main beef with this production is that there was a serious disconnect for me and I just didn’t care about this poor couple, who clearly both have some serious issues and demons. Unlike in Phillip Ridley’s Tender Napalm or even Noel Coward’s Private Lives, where you believe the emotion and want the couples to survive, in The Woods I just didn’t care enough.

I found the direction by Russell Bolam a bit disjointed and the constant ’fight, reconcile, fight, reconcile, oh no wait another fight, and just one more reconcile’ so monotonous that the play became uninteresting and I, along with those people checking their phones, couldn’t wait to get out of the woods and into the bar. The key moments going up a notch, or two, really could’ve helped cover the weaker scenes.

All in all, a disappointing production I’m afraid. To quote the eerily creepy Teddy Bears Picnic “If you go down in the woods today, you’re sure of a big surprise….”

The Woods is on at Southwark Playhouse until 26 March. Further information and bookings via the below link.

Previous: Competition: Win Tickets for My Soulmate’s Husband’s Soulmate
Next: Feature: The Women’s Prize for Playwriting