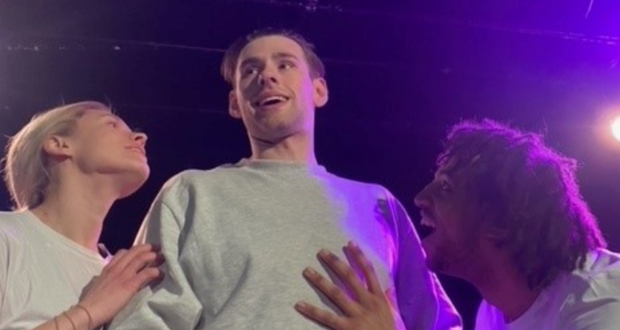 Telling the real-life story of a man who has spent most of his adult life in prison is surely a daunting task, especially for an emerging theatre maker. And so great credit must go to Unmark Theatre and writer/ director Aaron-Lee Eyles, who decide to tackle the true story of Mark DeFriest not in a safe, linear drama-based fashion, but rather one that takes the audience out of their comfort zones, throwing in elements of physical theatre, comedy, puppetry and even musicals. In fact it must equally take the four strong cast of Jay O’Connell (who plays Mark DeFriest)&hellip;

Fringe theatre that takes some serious risks and should be praised for doing so. At times wacky, at times touching, it really makes for an unforgettable experience.

Telling the real-life story of a man who has spent most of his adult life in prison is surely a daunting task, especially for an emerging theatre maker. And so great credit must go to Unmark Theatre and writer/ director Aaron-Lee Eyles, who decide to tackle the true story of Mark DeFriest not in a safe, linear drama-based fashion, but rather one that takes the audience out of their comfort zones, throwing in elements of physical theatre, comedy, puppetry and even musicals. In fact it must equally take the four strong cast of Jay O’Connell (who plays Mark DeFriest) Brandon Burke, William Bassoumba and Olivia Jannesson, out of any acting comfort zones. All four tackle their changing roles with much relish. OK, it isn’t going to appeal to those seeking traditionally staged drama, but hey, this is fringe theatre, if you can’t experiment with ideas here, where the hell else is it going to happen?

So, who is DeFriest? His narrative starts as, having lost his mother at a very young age, his father, with whom he is close, dies when Mark is just 19. For reasons the play never addresses, his stepmother reports him for the theft of his father’s tools which he felt were rightfully his (issues over the will still not being read). Sent to prison, his life quickly spirals out of control, likely because of any real lack of diagnosis of his unstable mental health. His initial prison sentence is extended as he attempts numerous escapes, and for poor behaviour. It’s a story demanding to be written. In fact, it was, and that documentary is how Eyles first came across his subject.

But how to tell bizarre tales of prison escapes, prison beatings and undiagnosed mental health issues? Well, here it’s via a host of theatrical devices that (mostly) work delightfully to create theatre that is inventive and exciting. Yes, there is the odd dud moment; the LSD scene is possibly one trick too many, and there is a little confusion as to the meaning of the flashback to his father being interrogated. Additionally, volume control could have been better handled, both in voice and soundtrack. At times both are too loud for this small space. There are also possible grounds to argue the flippancy on hand risks belittling the tragic story unfolding before us. It does mean that, come the end, the emotional punch of knowing Mark is still in prison is not the blow to the heart it should be.

But it’s the overall risk-taking that surely merits forgiveness for moments that could do with further consideration; this is a young theatre company after all, who are still learning their craft. The game show section is, on the other hand, a genuinely successful opportunity to admire the ingenuity of the creative minds behind it. Two mental health professionals debate Mark’s capacity to understand what he is doing, presented in the guise of a primetime gameshow complete with over-the-top host, before throwing it to the audience for a vote. The outcome of this is glaringly obvious; this play is a little slanted in favour of DeFriest after all!

But perhaps best of all is that musical number. After all the frenzy and wackiness beforehand, it’s a chance to catch your breath as Mark and Bonnie, his love interest, share a delightful moment of song together. It is a wonderful pastiche of Eminem’s ‘Stan’, with the pair exchanging love letters as Mark describes being in solitary. O’Connell’s rap is undeniably exceptional.

If you really want to see fringe theatre do something utterly different, experimenting with form and structure in ways traditional theatre probably never will, then this really is a show that demands attention. It’s a tragic story told in a way that will leave you quite wondering what the hell just happened.

Written and directed by: Aaron-Lee Eyles
Produced by: Unmark Theatre

DeFriest plays at Lion and Unicorn Theatre until 19 March. Further information and bookings via the below link.

Previous: Review: St Doctors Hospital, De Beauvoir Arms
Next: Interview: It’s Chekhov, But Not Quite As You Know It!