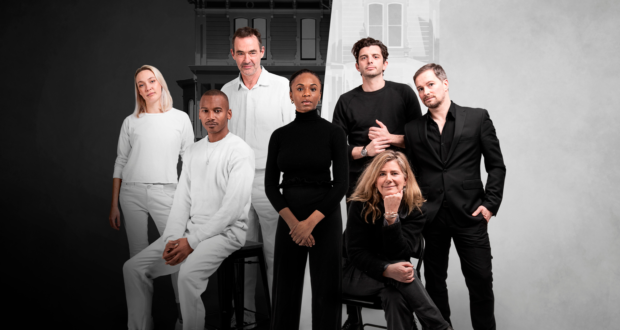 This dynamic revival of Bruce Norris's Clybourne Park was put on hiatus in March 2020 due to Covid, but it has slotted back in at a time when its satirical examination of human behaviours is searingly important. As it returns, we are in a society considering our relationships with foreigners, with war, with other genders and religions – our global neighbourhood. This production is a capsule, exposing multiple toxic opinions across generations; forcing us to think hard about them, and focussing in on what is timelessly important in life. The first act places us in 1959. As we begin,&hellip;

This dynamic revival of Bruce Norris‘s Clybourne Park was put on hiatus in March 2020 due to Covid, but it has slotted back in at a time when its satirical examination of human behaviours is searingly important. As it returns, we are in a society considering our relationships with foreigners, with war, with other genders and religions – our global neighbourhood. This production is a capsule, exposing multiple toxic opinions across generations; forcing us to think hard about them, and focussing in on what is timelessly important in life.

The first act places us in 1959. As we begin, a small dolls house is centre stage. A soldier carries it away, and the cast briskly sweep in to set domestic objects, replacing the house with a period home. A bereaved couple are moving out of the family home, where their son committed suicide, unable to live with himself after being shunned by the neighbourhood for his deeds in the Korean War. When it is revealed that the estate agent has secretly sold the house to the neighbourhood’s first black couple a nasty squabble ensues between members of that community.

Act two takes us fifty years on. We have a new set of characters, played very differently but by the same actors. Today the property is in a largely black area, being gentrified by incoming whites. The black couple are now members of the local residents group, defending the heritage of the area against change from the newcomers. Conversations in both time periods interweave issues of racism with stories of heritage, world history, ownership and belonging, each character’s perspective changing with time. The fiercely animated, accusatory discussions cover not only racism but misogyny, white privilege and denial as the neighbours struggle to communicate with each other.

There’s so much to enjoy in this production. Oliver Kaderbhai’s precision direction at times creates cacophonic disorder, with intense crescendos of tension and challenge, which are then instantly dispersed with humour. And although there are lot of laughs to be had, they are underscored with consciousness that it’s not always that appropriate to be laughing. Imogen Stubbs is delightful as the well-meaning Bev, but her insensitive treatment of her maid Francine (Aiyah Odoffin) and comments on ‘the Wheeler boy’ are excruciating. Equally, it’s easy to find yourself caught out by humour at the expense of the deaf Betsy (Katie Matsell), which is not always in response to her jokes.

The sharp, assured cast play brilliantly on the edge of stereotype before Norris’s insightful script slashes away the illusion created by their denial and selective prejudice, to disclose the reality of human frailty. Andrew Langtree as the frenzied Karl had me covering my face with my hands, recognising how his are commonplace social attitudes that often today still sit just below the surface of virtue signalling.

The ensemble make excellent use of the small playing space, with James Turner’s sparse but focussed design echoing the exposedness of their failings. In fact the floorplan itself is outlined with white tape, reminiscent of the crime scene that their social shortcomings could be said to create. Subtle clues, like the weight of Kenneth’s (Michael Fox) army trunk, which holds his suicide note, remind us of the responsibility of community. As the show draws to an end it is that trunk sitting centre stage, with the letter and a home in pieces within, that reminds us to consider the value of human life – whatever its form, and how it is undermined by selfishness and petty squabbling.

Clybourne Park will have you laughing; it will shock and challenge you. But without a doubt you will leave the theatre highly entertained and wanting to talk about what you’ve seen.