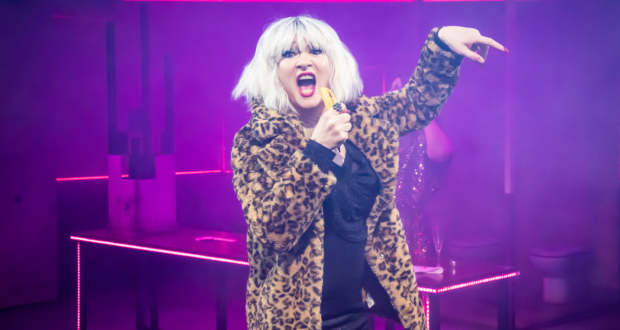 Packed with laughs, energy and a sparkle for life, Cherry Jezebel has you invested in the characters from start to finish.

Arriving with a sensationally sparkly splash, legendary drag queen Cherry Brandy (Micky Jones) accepts an award and sets the scene as the lead Queen. Thanking those who raised them in the then and now, with a smatter of rose-tinted recollections, life seems perfect. But is it really?

Written by Jonathan Larkin and directed by James Baker, Cherry Jezebel portrays being part of the LGBTQ+ community through a multi-faceted lens. The script is well-crafted. It cleverly intertwines the nostalgic with the contemporary to draw parallels between the lived experiences of the characters in different timeframes, whilst nodding to the fact that these are still current social issues, and issues for real people.

The play demands polished presence and skill from its cast of four. Dialogue is pacy and, at times, hard to keep up with, but it is within their conversations that the audience is drawn into the characters. We get to know that Cherry is still scarred by abusive past relationships; that Heidi intends to take some big life steps; and why Pearl Reckless (Stefan Race) is called Pearl. There is a duelling undercurrent of love and conflict in most interactions.

All four cast members are faultless. Jones shines in the title role, owning the stage in true diva style. His characterisation brings Cherry to life through quick-witted humour, delivered in true Scouse style. Louca brings a different dimension of energy to the production as Heidi, balancing perfectly against that of Cherry, to create a clear chemistry between them. Race as Pearl and George Jones as Mo give superb performances and are outstanding with their movement, which at times is almost sprite-like. With such strong presence, the audience was engrossed throughout.

The stage props and design are very creative, contributing to the perception of being wrapped up in someone’s life and leaving the audience as intimate witnesses rather than passive viewers.

As the final scene was underway, the audience rose to their feet and joined in. The atmosphere flowed with the feelgood factor and applause. We’d been on a fly-on-the-wall journey with our characters and were rooting for the uncertain future that lies before them all as the show ends. Glitter confetti rained from the ceiling while colourful lights illuminated the room, with an audience unanimously on its feet, suggesting a night with Cherry Jezebel is not to be missed.

Cherry Jezebel is playing at Liverpool’s Everyman Playhouse until 26 March. Further information and booking via the below link.

Previous: Film Review: The Road Dance
Next: Interview: Two thousand years in one night at Questors