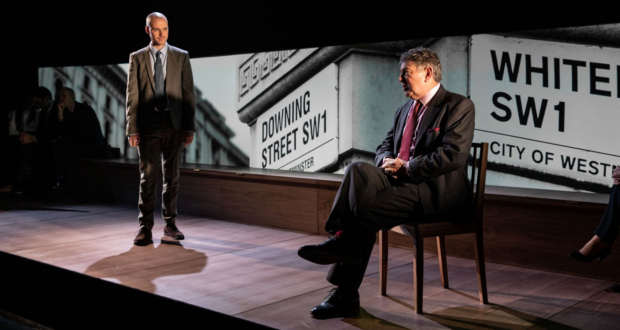 Journalist Tim Walker’s debut play Bloody Difficult Women premiers this week at the Riverside Studios in Hammersmith. The title refers to a remark former Foreign Secretary Ken Clarke made about Teresa May during her bid for the Conservative Party leadership in 2016.&nbsp; At the time he had no idea that his microphone was on, and he made far more brutal comments in the same conversation about Michael Gove and Boris Johnson, but it was his May soundbite that made the headlines. In a similar vein, this play is primarily concerned with media-controlled politics.&nbsp; Bloody Difficult Women recounts the High&hellip;

A powerful and insightful examination of political disagreement and media manipulation.

Journalist Tim Walker’s debut play Bloody Difficult Women premiers this week at the Riverside Studios in Hammersmith. The title refers to a remark former Foreign Secretary Ken Clarke made about Teresa May during her bid for the Conservative Party leadership in 2016.  At the time he had no idea that his microphone was on, and he made far more brutal comments in the same conversation about Michael Gove and Boris Johnson, but it was his May soundbite that made the headlines. In a similar vein, this play is primarily concerned with media-controlled politics.

Bloody Difficult Women recounts the High Court case brought by businesswoman Gina Miller in 2016 against the newly-elected Teresa May, challenging the legality of triggering Brexit without seeking the approval of Parliament. Miller won the case in the High Court and again on appeal in the Supreme Court: in so doing she inflicted the Prime Minister’s first defeat. The resulting misogyny experienced by both May and Miller and the influence of the media on political life are harshly obvious in this stage interpretation.

The bravery of the play is delivered through its brutal, unapologetic depiction of the expletive-laden fury of Paul Dacre, then Editor of the Daily Mail, faultlessly played by Andrew Woodall. Desperate to further his own Brexit vision, he is incensed at the decisions the judges make and will stop at little to promote his narrative. Historical images from his papers are displayed on the screen at the back of the stage, reinforcing the horror. Dacre has easy access to Downing Street; his diary dictates when May’s 60th birthday celebrations can be held and he is often rude in her company. His influence and manipulation are clear. As a result of the invasive press attention from his paper, Miller is subject to vile online hatred and abuse, including death threats.

Minimal staging is used effectively in this production, with all actors continuously present, passively sat facing the audience when not directly involved in the action: the omnipresent surveillance reflective of the position May and Miller are in. The action concludes with a meeting between the two women in May’s constituency home after pandemic lockdowns. Argumentative at first, they ultimately recognise their commonality of isolation as determined women in a man’s world, alongside their shared disdain for the unnamed Foreign Secretary (Johnson), which culminates in an awkward goodbye hug. Both women reclaim the title of Bloody Difficult, to their credit.

As I entered the Studios for the night I nearly tripped over John Bercow, former Speaker of The House of Commons (to be fair he was most apologetic). Looking around, it became obvious that several politicians and journalists, as well as the playwright and Gina Miller herself, were there.  Given the number of interested parties present, we can assume that much of the content of the play is authentic even if (as is clear in the programme’s disclaimer) the dialogue and situations are imaginary. It is this accuracy that continues to haunt me. However, satirical humour prevails throughout the production which, whilst appealing to a certain type of audience, detracts from the core of the piece. For the spectator unfamiliar with the daily workings of government, this play is an eye opener, as the true influencers of the Cabinet and its isolation from reality are revealed. Whilst many of us have doubts about the independence of the media, it is not until you are presented with a piece like this that the reality of the extent of their manipulation is revealed. This is the power of the play.

Bloody Difficult Women plays at RIverside Studios until 26 March. Further information and bookings via the below button.